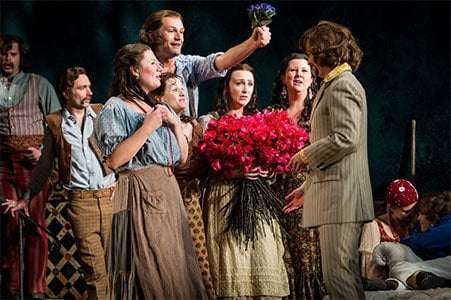 Glyndebourne’s touring version last year of its ‘house’ opera made rather more sense than this first revival in the main festival of Michael Grandage’s production, following hard on the heels of its first run, also last year, mainly because it seemed so much more at ease with its precise, late-Sixties, early-Seventies setting.

I’ll just have to get over the fact that there isn’t a hint of the impending social upheaval that drives the Beaumarchais original. The nearest I can get to explaining any sort of them-and-us, have-and-have-not divide is that, in the words of F. Scott Fitzgerald, “the rich are different”, with the Almavivas perhaps an expression of the cynical opportunism that came in the wake of the early Sixties. The Almavivas’ Alhambra-style country house, Aguafrescas, beautifully realised in Christopher Oram’s set and viewed, to audience sighs of satisfaction, from all angles by good use of the stage-revolve (not used for the touring version), speaks of socially nobler, more defined times, but now a trophy house for an oik such as the Count, who is oblivious to its beauties – a point made stronger and with brilliantly cruel precision by horrible furniture and by the hideous Seventies’ clothes the cast wears – flared trousers, hot pants, floral shirts with awful huge collars – ugh. 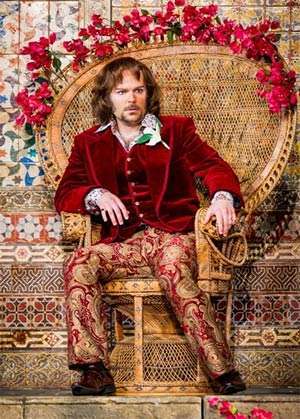 Yet, even in the democratised reading of Le nozze di Figaro as offered by Grandage and the revival director Ian Rutherford (who also presided over the touring version), you still need a sense of subversion, mischief and at least the possibility of melancholy to operate Mozart’s and Da Ponte’s masterpiece – and there was little evidence of either Adam Plachetka’s Figaro or Joshua Reynolds’s Count conveying this.

Plachetka is a fine Mozart baritone, but he was altogether too nice and wholesome for a servant who at least has to keep one step ahead of the Count’s predatory game. ‘Si vuol ballare’ didn’t have that vital element of threat, and as for the shuddering moment in Act Three, when Figaro confronts the Count – a moment in David McVicar’s traditional Royal Opera production where it’s so shocking that times stands still – well, forget it. Plachetka came into his own in Act Four as Susanna’s passionate Figaro, with some excellent comic timing and lovely singing, but he just needed to be tougher. Reynolds had the Count’s spite, but he didn’t project much in the way of the Count’s confusion and thwarted lust, backed up by his unfocussed Act Three aria. 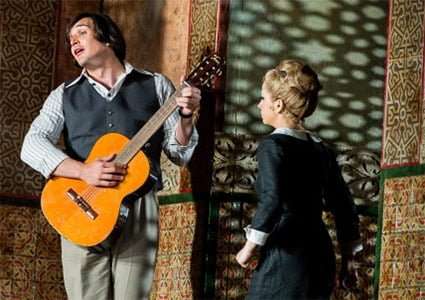 Susanna did much to come to the galvanising rescue of Figaro, and Laura Tatulescu’s performance was consistently the best thing of the evening. Even so, her connection to Figaro was generically affectionate rather than fervent, nor was there a feeling of fond exasperation in her friendship with the Countess. Her singing and acting, though, were attractive and vivacious, and her manipulation of the Count was keenly observed. Amanda Majeski didn’t do it for me as the Countess. You wouldn’t associate her hard, bright tone with an abandoned wife’s quiet desperation. She looked good and studiedly diaphanous floating aimlessly around in her platform espadrilles and yards of chiffon, but there wasn’t much of that self-absorbed contemplation of her emptiness in her arias that can still catch you unawares. Lydia Teuscher was apparently excellent last year as Susanna, but for Cherubino her voice was too high and she didn’t get near my idea of tumescent teenage hormones on the razzle.

The Bartolo-Marcellina-Basilio gang were played with the sort of satisfying verve and detail you take for granted at Glyndebourne by Luciano Di Pasquale (his Vendetta aria had notable venom and crisp patter), by Anne Mason as a frump on the make whose excellent singing made you regret the absence of her Act Four aria and by Timothy Robinson as a spectacularly odious, snake-like and ageing groover of a music teacher (also denied his aria). Sara Lian Owen’s Barbarina was a delight, ditto the two bridesmaids, their baby-doll dresses evoking the dress-sense of Grayson Perry.

But this was a two-dimensional Figaro, its humour coarse rather than incisive, the tangle of relationships and motives too broad-brush, the essential charm of the work fitful, and the sadness behind the comedy played down. Jérémie Rhorer set up expectations in the Overture – during which Cherubino’s self-defenestration at the end of Act Two was wittily anticipated – which didn’t quite materialise in an over-accommodating first half, but he snapped into focus for a well-paced final Act. The LPO was on crisp form, and the fortepiano continuo was consistently alert and witty.