“British electro pioneer Gary Numan makes his Royal Albert Hall debut this year, with The Skaparis Orchestra! In 2017 Numan released Savage: Songs From A Broken World, and earned the best reviews of his career, entering the UK charts at No.2. This show will feature songs drawn not only from his highly successful Savage album, but also key songs from his vast back catalogue.” [Royal Albert Hall website] 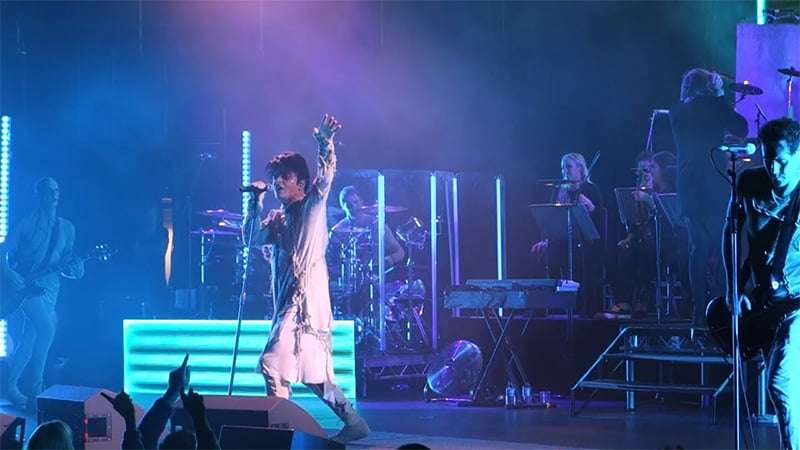 Vertical red-strip lighting and an operatically huge curtain pulsing with blue flowers was the eerie backdrop for warm-up artist, ex-Numan Band member, Chris Payne and his wife Dominique (vocals) both evoking Celtic mysticism with songs (lyrics inaudible). “That’s tough past sixty, it all packs up” joked Chris, a truly consummate performer. ‘In the Red Fields of Flanders’ was a timely folk remembrance. Then guitarist Russell Bell joined the duo for a rendition of Chris’s global 1980s’ hit ‘Fade to Grey’. An interval followed.

A huge blue iris projection, repeating harp solo, foreboding double bass, shrieking electric violins, fraying mummy-like men staggering onto the stage like a 1920s’ horror montage! Then the dark lord himself Gary Numan strolled on with his unmistakable black quiff, wearing torn cargo pants, to a Blade Runner-style laser display. He launched with ‘Ghost Nation’, the lyrics of which he has tattooed on his arms, then the timeless hit ‘Metal’, and ‘Down in the Park’. The Skaparis Orchestra’s strings screamed out as Gary danced by knee-bends and crossed arms, and the audience was electrified, stamping, swaying and shouting.

Persia, Gary’s twelve-year-old daughter, joined him for ‘My Name is Ruin’ with huge projections of her face behind, a mournful song of loss shot in the arid desert of California. The Royal Albert Hall saturated in green light, underscored by heavy strings, gave up ‘Jagged’ then ‘Mercy’, both accompanied by unforgiving wasteland scenes. Persia made another appearance for ‘My Breathing’.

And the moment came … purple lasers pounced, strings pulsed, the female backing group was ecstatic, and the audience roared for ‘Are Friends Electric’, a macabre hymn to the lonely. Oddly enough he did not sing Cars’. Green lighting heralded ‘The End of Things’ then ‘A Prayer for the Unborn’. Gary thanked the audience profusely and the Skaparis Orchestra and its conductor Simon for putting up with his indecision, along with Richard Beasley (drums), David Brooks (organs & cables), Tim Muddiman (bass) and Steve Harris (guitar). Gary Numan is a unique musician with a mould-breaking mix of avant-garde and commercial. The crowd adored him, repeatedly chanting “Numan”!