Gerald Barry
Alice’s Adventures Under Ground – an Opera to a libretto prepared by the composer based on the texts of Lewis Carroll’s Alice in Wonderland and Alice through the Looking Glass [Barbican Centre co-commission: European premiere] 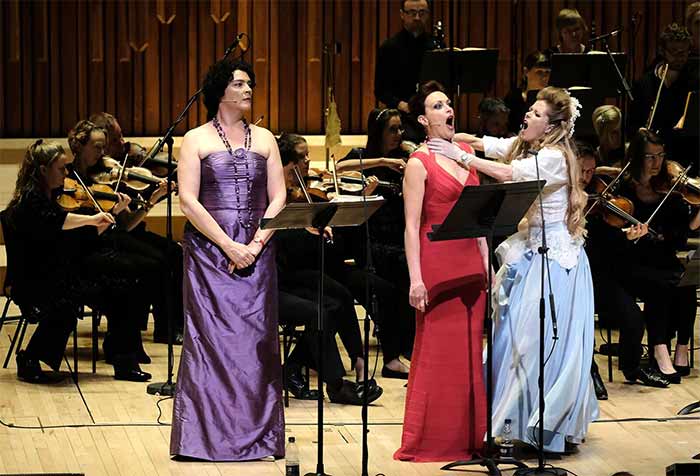 Lewis Carroll’s two Alice books have given generously over the years to painters, film-makers and composers, and here she is again, in Gerald Barry’s new opera. Alice’s “eat me, drink me” instructions are supposed to be evidence of the books’ drug-induced fantasy, and you do wonder what the composer might have ingested to produce such a hallucinogenic, off-beam work.

Barry’s previous opera, The Importance of Being Earnest, had set a high level of subversion, which his Alice’s Adventures Under Ground – Carroll’s original working title for the ‘Wonderland’ book – continues in much the same style, bringing together parody, delirium and broad comedy in a brief (about fifty-five minutes), sustained and fantastic eruption. Presumably, now that it has had its concert-performance Euro-premiere – the world premiere was in Los Angeles last week – directors will be lining up to stage it, although the vocal and instrumental writing is so vivid that any staging would have its work cut out keeping up – the pace is as anarchic and cinematic as, say, a Tom and Jerry cartoon.

As with the Oscar Wilde opera, Barry has again run riot with one of the totems of the English language – and this time a character cherished by generations of children – and doesn’t so much interpret it as shock it into submission. Set pieces and familiar characters like the Mad Hatter’s Tea Party, the croquet match, Queens red and white, the Duchess and the Cheshire Cat give an illusion of security which is then thoroughly debagged by Barry’s acute penchant for the absurd and the surreal. He puts the Jabber into Jabberwocky by setting it in Russian, German, French and Italian as well as ‘English’, and, as in the Wilde opera, he again presses Beethoven’s ‘Ode to Joy’ into service; and I think I heard the word-obsessed Humpty Dumpty wistfully sending up the “Is this it all?” close to Britten’s The Rape of Lucretia. 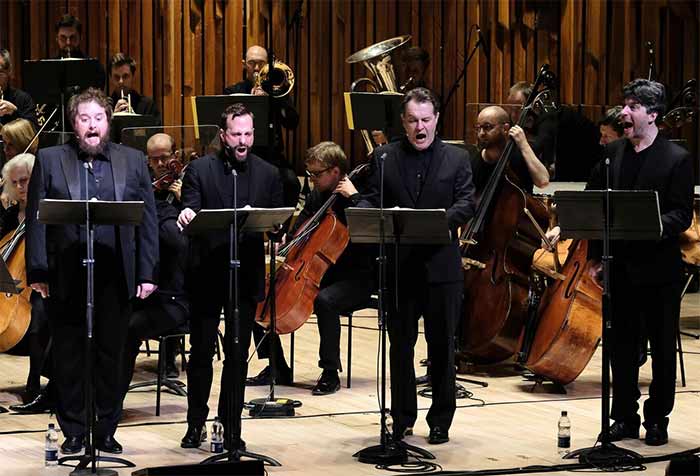 There are, no doubt, hundreds more allusions, as Barry applies his influences before moving swiftly on. At the start, you think he has gone all John Adams minimalist as Alice and the orchestra outdo each other in arpeggios, but the impression quickly disintegrates and reforms. How he keeps up such a hyperactive degree of constant destabilisation is anyone’s guess. The result hovers between extremes of elation and exhaustion, but there are sufficient silences and other moments of repose to make you question Barry’s motives all over again – which is quite an achievement.

Recent Alice operas by Will Todd and Unsuk Chin have made her a fixed point of sanity, but here she is completely folded into its bizarre, off-beam logic. Alice was brilliantly performed by Barbara Hannigan, making neat work of the music’s impossible range and virtuosity. She was dressed as a wild riff on Alice’s blue-and-white Victorian outfit and communicated her sense of outrage with abandon. With the six other singers covering some fifty characters, the mezzo Allison Cook, with a top range every bit as startling as Hannigan’s, went over the top as caricature Red Queen autocrat, and the contralto Hilary Summers included an adorable Dormouse and imperious White Queen. The four men seemed rather subdued by the power-trio of women. Tenors Allan Clayton and Peter Tantsits coped magnificently with Barry’s constant high-voice demands, Mark Stone was a memorable Cheshire Cat and Joshua Bloom’s Humpty Dumpty was strangely touching.

Thomas Adès, who continues to champion Barry’s music and, one imagines, has some sympathy with Barry’s style, encouraged the Britten Sinfonia’s delirious best in some astonishingly rebarbative and brilliant playing.