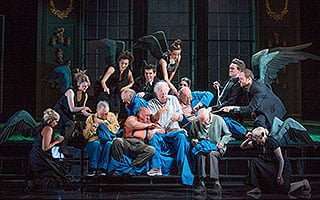 One thing Henry Purcell achieved in his short life was, certainly in his stage-works, the facility to keep his audience gagging for more. This is never more the case than in his semi-opera The Fairy Queen, back for its first Glyndebourne revival, which inserts some of his finest music into a far-from-fine bowdlerisation of Shakespeare’s A Midsummer Night’s Dream, prepared a century later in the 1690s, with some further tinkering, I suspect, by Jonathan Kent. At times, you could be forgiven for thinking of the adaptation in much the same light as Victorian ‘improvements’ to ancient parish churches.

The reams of rhyming couplets, with the odd original line surfacing like a patch of security blanket (and subconsciously evoking memories of another, much later genius of an English composer’s opera on the same subject), sometimes reduces this much-loved, familiar play to the level of pantomime rather than an early attempt at complete music theatre – and it doesn’t help that the text forms the bulk of a very long evening (getting on for three-and-a-half hours, not including the dinner interval) – with some of the words a poorly projected blur, from the lovers in particular, although Titania and Oberon (Penny Downie and Finbar Lynch) made every word count. 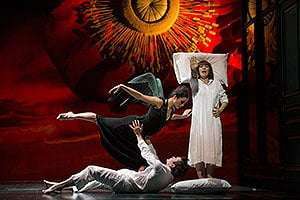 Kent’s vigorous direction and Paul Brown’s referential design feeding-frenzy set out on a robust rescue mission, in one of Glyndebourne’s most extravagant productions in years. Things start soberly enough, in Theseus’s late-seventeenth-century wunderkammer, but it’s not long before the ‘cabinets of curiosities’ and specimens are bursting open to admit fairy chaos, setting the scene for a time-travelling parade of boiler-suited rude mechanicals, the lovers losing most of their 1690s’ costume and ending in modern dress with many a nod to sumptuous baroque stagecraft such as the vision of the sun-god Apollo sailing through the sky, and the giant Jeff Koons-style rabbits gleefully doing what comes naturally in the ‘Masque of Seduction’, which will always identify this staging. Much more memorable, though, were the fairies with their imp-like black wings and the transformation of Titania into a hanging chrysalis for the ‘Masque of Sleep’.

In the first half, the glut of words made the pace drag, and the two masques at the end of Act Two (Sleep) and Act Three (Seduction) seemed a long time coming. When they did, though, they were magical and truly operatic. ‘Masque of Sleep’ reminded you of the glories of Purcell’s transparent, flickering sound, and the ‘echo chorus’ was wittily staged and beautifully sung; and ‘Masque of Seduction’ showed off his genius for burlesque as Titania leads Bottom on into tumescent sensuality – and not just the bonking bunnies, there’s also a terrific drag-act in the duet for two flirting rustics who emerge out of a haystack. 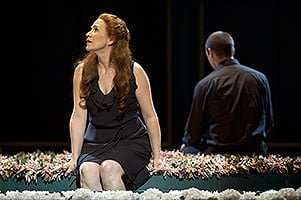 I may have still been a bit poker-faced, but the bravura of direction and design in the masques did enhance the extraordinarily direct emotionalism of Purcell’s music. The second half (Acts Three & Four) has more music, which was performed in a way that complemented the play rather than being merely decorative. The presentation of the seasons to Apollo in ‘Masque of the New Day’, after lovers and fairies are reconciled, was like an Archimboldo painting come to life, and Gavan Ring was superb in Apollo’s song. ‘The Masque of Marriage’ moved seamlessly from Carolyn Sampson’s heartbreaking and pleasingly long ‘Plaint’ on the theme of loss (very much at the same emotional level as ‘Dido’s Lament’) to the sort of wedding reception, the abandon and delirium of which you hope for but which hardly ever materialises.

The colour coding of the lovers was useful – blond for Hermia and Lysander, dark for Helena and Demetrius, all four of them personable and the girls’ fight was very well staged. Christopher Benjamin was a loquacious egotist of a Bottom; the preamble to the Pyramus and Thisbe play could be cut without losing anything, but the play itself went with a very English, am-dram swing to much delight. Finbar Lynch’s Oberon was a terrible ‘smoothy’, of a manipulative type to be found in many a boardroom, and Penny Downie gave Titania her RADA all. Among the solo singers David Soar’s Vicar/the marriage god Hymen made the strongest case yet for women priests, a really funny cameo; there was a lovely Junio from Joélle Harvey; and, as the original married couple, Peter Gijsbertsen and Charlotte Beament sported their fig-leaves with pride as Adam and Eve.

Laurence Cummings didn’t so much conduct the music as animate it with a breathtaking emotional range and vitality, magnificently realised by the OAE’s sonorous playing. It was, in the end, one of those Glyndebourne evenings that spun its unforgettable, feel-good magic.