Berlioz
Béatrice et Bénédict – Opéra-comique in two Acts to a libretto by the composer based on Shakespeare’s Much Ado About Nothing [sung in French, with English surtitles; performed using Hugh Macdonald’s Bärenreiter edition; French dialogue adapted by Agathe Melinand] 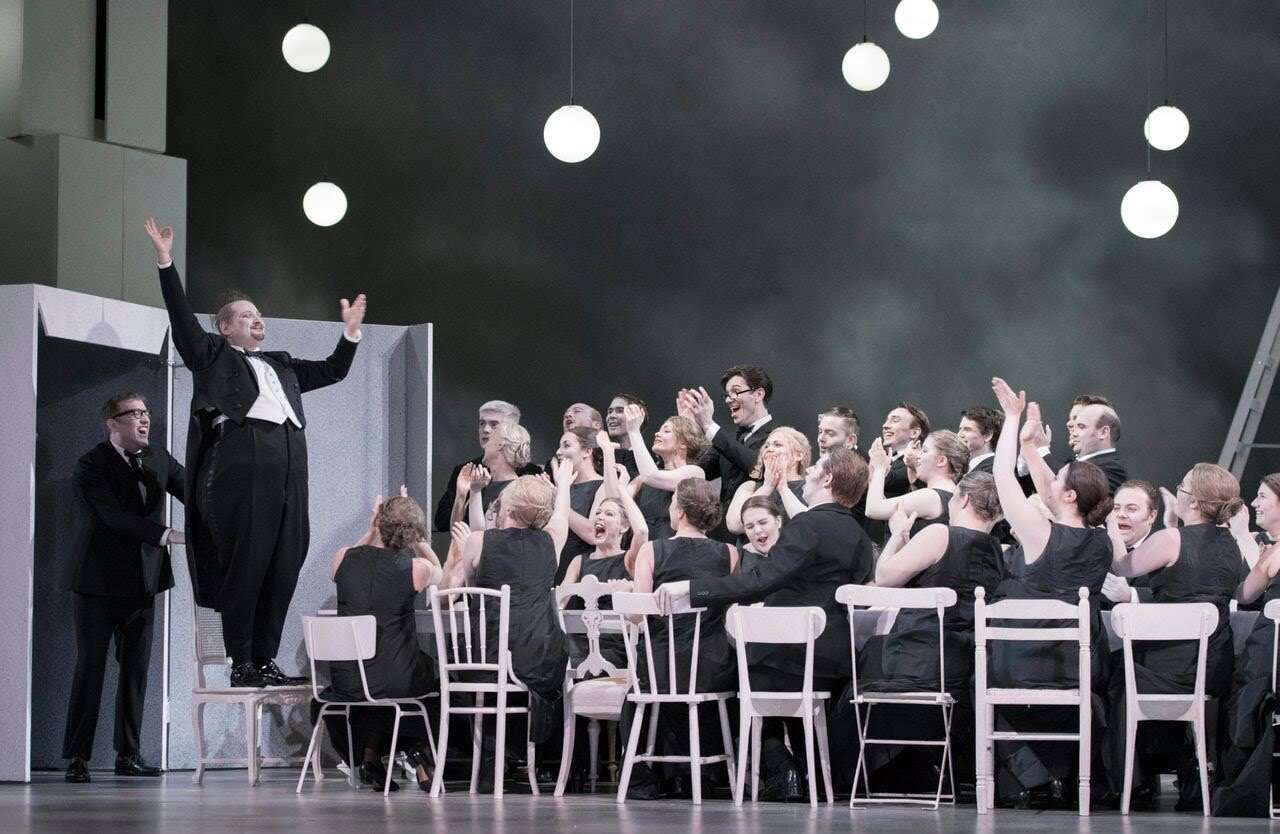 We are at Glyndebourne for Berlioz’s third and final Opera (the others being Benvenuto Cellini and Les Troyens); Béatrice et Bénédict is based on Shakespeare’s Much Ado About Nothing.

If the story is slight – Héro and Claudio, the celebrated latter just back from a triumphant war, are firmly in love and their wedding day beckons, whereas the titular two are forever arguing with each other and finding fault, bearded Benedict vowing never to marry; even his facial hair is of nuisance value to Béatrice. Their friends think that with encouragement they will fall for each other and get spliced, if bickering.

Berlioz’s characteristically quirky if endearing changes of harmony and classically transparent orchestration (including a guitar) are always a pleasure, not least in the Overture, mercurial, amorous yet bittersweet, consistently expressive – one of music’s miracles, in fact. Antonello Manacorda (long ago the replacement for Robin Ticciati) paced the fast music perfectly, the London Philharmonic playing with point and sensitivity, but the slow section dragged to over-caressed stasis, however beautiful it may have been, although there was no doubting the conductor’s affection. Throughout, the curtain was down; thankfully Laurent Pelly resisted any temptation to add visuals to something that says it all. 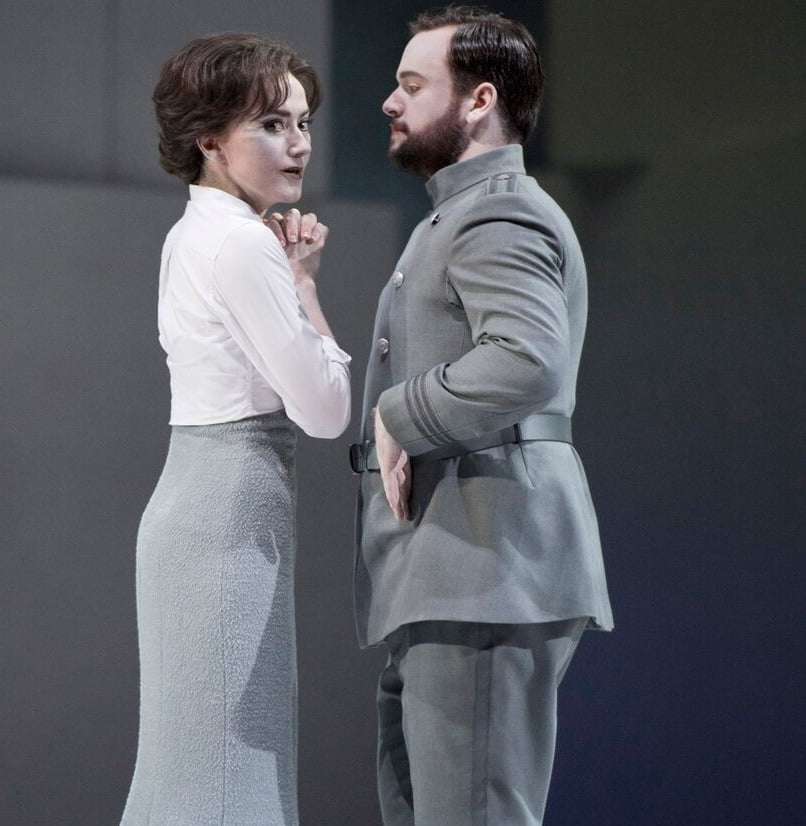 Once again the superb acoustic of this East Sussex venue doesn’t miss a detail, everything reaching the ear lucidly and truthfully, although there were times when Manacorda’s left-hand signalled a diminuendo and there wasn’t much of a response, yet how magical was the very quiet end of Act One when, following a heartfelt duet between Héro and Ursule – which would easily fit into Così – the LPO offered a delectable clarinet solo and shimmering strings, tantalisingly just-audible.

A mention of Così signifies that Béatrice et Bénédict has its Mozartean moments, swinging the other way to embrace Offenbachian charm and liveliness, but it’s always unmistakably by Berlioz, who does light and joyous wonderfully well while not overlooking the deepest of human emotions. Pelly’s staging brings much charm, beginning with white cubes (there’s also one of those in the Glyndebourne gardens!) from which the townsfolk emerge, like Jacks-in-the-box, to flag-wave Claudio the hero’s return to his Héro, the Glyndebourne Chorus in lusty voice and excellent throughout. Meanwhile, Béatrice and Bénédict are squabbling as usual, running from each other if, significantly, coming back for more.

If the ear is beguiled, so too the eye, many more boxes arrive piled high (very Tate Modern), later ladders, hanging lights and a push-me pull-you table for the wedding reception, and Héro’s sumptuous dress. The only aspect that doesn’t work is the protracted and increasingly irritating exchange in Act One between Somarone, the bumptious and erratic music-master who has composed a dreadful choral song for the wedding (Berlioz deliberately off-key), and the orchestra, which is required to re-tune (I was though amused by the snippet of The Barber of Seville Overture from a violinist, Rossini’s Opera itself not unknown at Glyndebourne this season). Lionel Lhote may be a swaggering comic turn but this episode needs trimming, otherwise there is inflation that does Berlioz’s clarity a disservice. 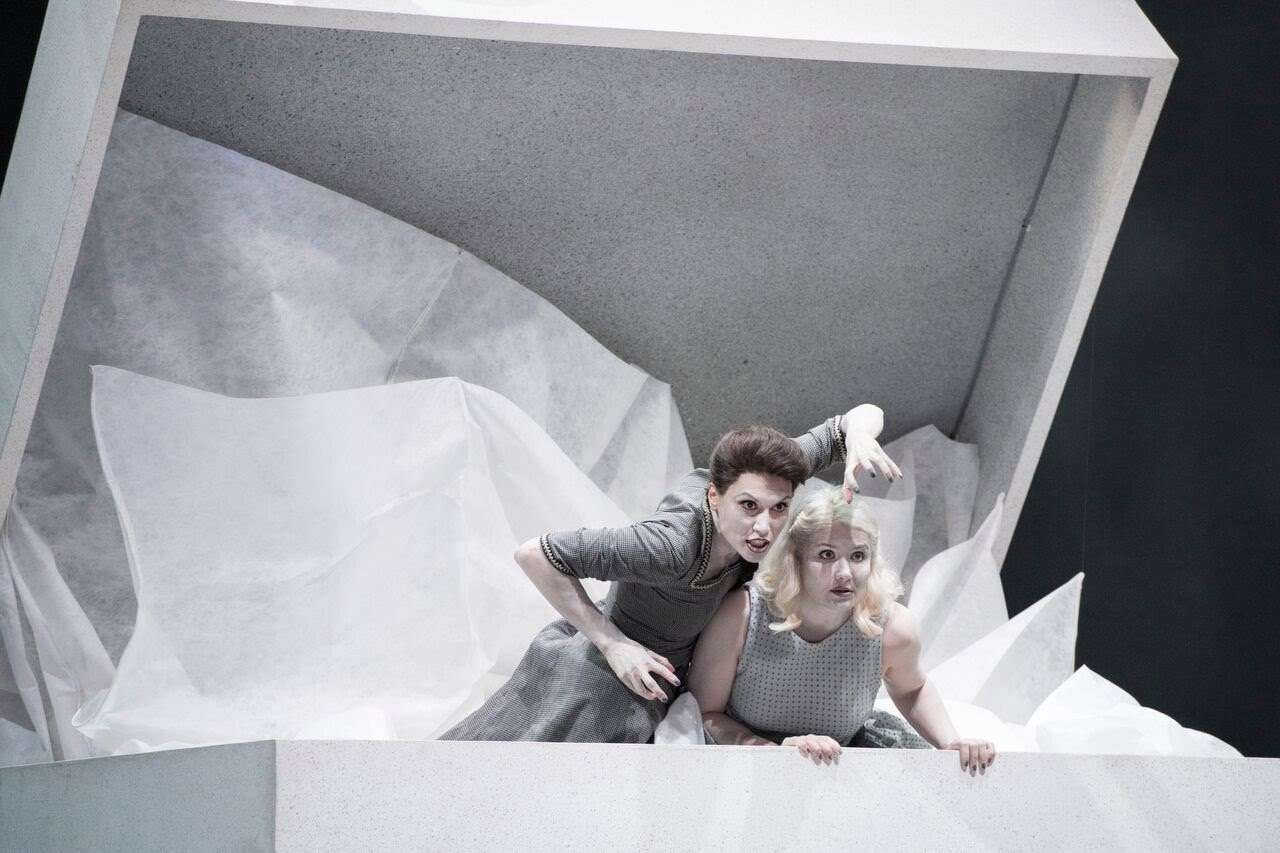 Otherwise, there is much that woos, not least from the singers – it’s a consistently fine cast if with Stéphanie d’Oustrac, Paul Appleby, Katarina Bradić and (with a rapturous aria) Sophie Karthäuser especially noteworthy, the three ladies have a gorgeous trio, too – the latter singer is sharing the role of Héro with Anne Catherine Gillet, six performances each to replace Hélène Guilmette.

A directorial detail that remains memorable is the receptive way the servants clear-away after the reception, quietly and slowly, recognising that Béatrice is in a deep muse deliberating about Bénédict; she is a woman alone seated, the stage now bare; she’s agonising: living with the hirsute one or life in a nunnery.

So, laughs, merriment, joie de vivre and poignancy wrapped into a very well-made production handsomely performed by all, at the heart of which is the place itself, for Glyndebourne is quintessential England, timeless in its tranquillity (and this was a particularly lovely day) and away from an increasingly troubled World: therapeutic.