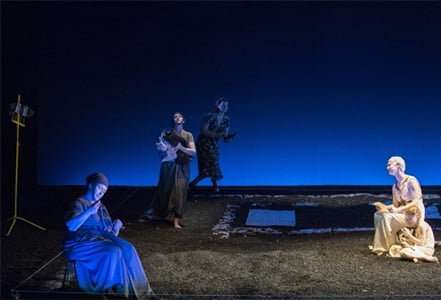 Benjamin Britten’s The Rape of Lucretia has been a problem opera since it first appeared, at Glyndebourne on 12 July 1946, the premiere conducted by Ernest Ansermet and directed by Eric Crozier, causing a rift between composer and the Sussex opera house that took more than 30 years to resolve. Ronald Duncan’s wildly florid libretto is intimidatingly ‘arty’, as though it would much rather be a play in the style of T. S. Eliot; the Male and Female Choruses, who oversee the classical story of the virtuous Roman wife Lucretia’s fate at the hands of the Etruscan prince Tarquinius, too often seem arch, distancing and characterless; and if their Christian annexation of the events seemed a bit much for Christian-literate audiences 67 years ago, it is even more out of step with our secular times. 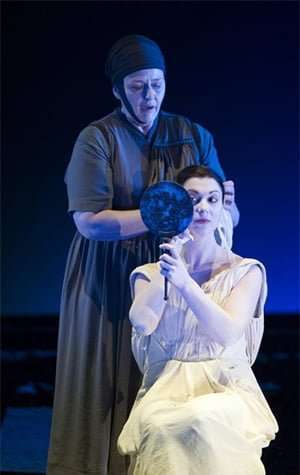 It’s very much to Fiona Shaw’s credit that her new production – and Glyndebourne’s first since 1946 – depetrifies so imaginatively an opera that can seem written in stone, and in the process adds elements of mystery and ambiguity to set aside those in, for example, The Turn of the Screw. Rather than being in Roman togas, the Choruses are presented as prim, repressed archaeologists in the 1940s, working on the site where the antique fable of defiled chastity and virtue first unfolded. As they dig deeper, the story possesses them, and the past throws off its symbolism and rushes up to embrace the present as they become more and more involved. Brilliantly explaining the worrisome Christian element, they are also presented as fervent Bible-bashers who righteously use their faith to protect themselves from the story’s raw eroticism – unsuccessfully, as it happens, when they are overwhelmed by Lucretia’s rape into their own act of explosive lust. Shaw caps this by suggesting that Lucretia has somehow connived in her rape (something that Graham Vick alluded to in his 1980s’ ENO production), which heightens both the ambiguity and the eroticism. The way in which Shaw encourages layers of meaning to flow back and forth in time, so that you’re never quite sure what is action and what is interpretation, is achieved impressively, and the result is both haunting and troubling.

There are plenty of visual coups, as well, in Michael Levine’s effective designs – the tarpaulin protecting the site rises to become the Roman soldiers’ tent; Lucretia ascends from the earth to relive the past; and the last image we see leaves us in no doubt that her fate belongs in the same stable as the Passion of Christ. This lucid ambivalence suits Britten’s music, which didn’t for a moment feel that it was succeeding in spite of the libretto. Nicholas Collon and the 13-strong ensemble worked wonders with Britten’s tirelessly inventive, apposite score – that strange harp passage near the start instantly evoked the languor of bored soldiers on heat – which often sounds as though it was composed in the 1960s rather than the 1940s.

The singing was just as fine. Allan Clayton did a remarkable, highly characterised job as the Male Chorus, and was electrifying in his description of Tarquinius’s ride to Rome. Kate Valentine sang the Female Chorus with similar compelling engagement – her lullaby to the sleeping Lucretia was outstanding – and you easily forgot her main function as narrator. As Tarquinius, Duncan Rock had more than enough physical presence for the role, and proved to be disquietingly seductive in his soliloquy. You could hear every word of Catherine Wyn-Rogers’s decisively sung serving-woman Bianca. Oliver Dunn’s skilfully played Junius wound-up Tarquinius to test Lucretia’s virtue like someone offering an alcoholic a drink, and there was fine singing from David Soar as Collatinus, the husband of Lucretia. Claudia Huckle’s vocal weight suited the latter’s mythic status, although she sounded less comfortable at the top of her register – and to heighten the pathos she is given a young daughter (a non-singing role). Like all archaeology, this production was rediscovery in action.