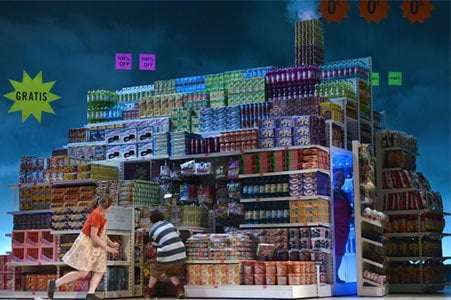 Hänsel und Gretel has been served pretty well by English opera companies, not least by Glyndebourne, where this production was first seen in 2008, and whose Tour offshoot has now revived it twice. It is a visually lavish realisation of the fairy tale, even as it contrasts rather poignantly the poverty and desolation of the children’s home and the forest in which they pick strawberries for their dinner, with the saccharine riches of the Witch’s house. Atmospheric lighting, particularly in the first two Acts, functions almost as a series of optical leitmotifs, with blue twilight at first, a brighter glow when the Father arrives with some bags of food, and hellish red when the Mother’s and Father’s conversation turns to the Witch who dwells in the woods.

By and large it is not a production played for laughs or to make light of the situation, but drives home the privation and fears from which the Broom-maker’s family all suffer. In Act One we see into their house, made precariously of cardboard and held together by brown tape. On a casual glance it could still pass as a simple, cosy hut deep in the forest, though its destitute state quickly becomes clear. But more indirectly perhaps, it also suggests the fragile make-believe world of young children’s minds as it might be the sort of construction youngsters make at school out of recycled goods.

This contrasts with the most memorable facet of the production, the Witch’s house in Act Three, which is conceived by Barbara de Limburg as composed of serried ranks of fizzy drinks, boxes of cakes and biscuits, and packets of sweets. It looks colourful and inviting enough to us in the audience, let alone for the pair of starving, guileless children. We know that the offer of everything for free is too good to be true, as the children dimly perceive by pretending to go along with the Witch’s spells so as finally to overcome her. As the group of captive, fattened children are led out from the house to their freedom, and the Father and Mother arrive to pronounce that the Witch’s evil supermarket is “forever closed”. Not only then is the moral made about temptation and seeking satisfaction instead in wholesome things honestly worked for, but quite possibly a sidelight is cast upon the all too ready availability of sugary, calorific foodstuffs in the contemporary developed world and their contribution to child obesity. 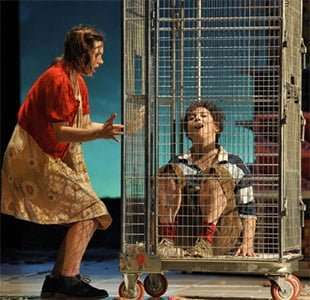 It is easy to sympathise with Hansel and Gretel however, as hardship appears to weigh upon them constantly, since even the trees of the forest are bereft of leaves and painfully lean, with bin bags strewn around them, appearing like a ghostly shanty town. The children’s desire for nourishment is also projected onto the angels of which they dream at the end of Act Two, who are not protectors as such, but are seen eating burgers out of polystyrene containers as though from a kebab van. Stephen Gadd’s Father was not only tipsy on arriving home, but with an attempt to hit the Mother with a broom wearing his rough wife-beater vest, there was perhaps a hint of domestic violence, though none was enacted.

Victoria Yarovaya and Andriana Chuchman looked the part as the children and energetically frolicked around, hardly needing any of the infusions of sugar the Witch had to offer. Chuchman sounded like the bossy, know-it-all elder sister initially, but by Act Three Victoria Yarovaya was also able to show a streak of maturity as Hansel when he directed his sister to pretend to go along with the Witch’s spells. Anne Mason as the Mother certainly sounded appropriately care-worn, but she was not as vocally commanding as would have been ideal, especially in relation to the children. Stephen Gadd’s portrayal of the Father carried authority, even in his drunken state or making the character seem somewhat coarse. Colin Judson’s Witch was no figure of fun, but a sinister presence at first, in a pink dress suit and high heels, and then positively grotesque as she appeared bald and with jacket open to reveal a paunch and breasts barely contained in a bra. Accordingly, in his singing, Judson did not vulgarise or diminish the role, but conveyed a suitably evil purpose, marked sometimes by a Mime-like sense of frustration before being fatally cast into her own oven by Gretel. (Der Ring des Nibelungen seems as much of an influence at times in this opera as does Parsifal at others.) Lauren Easton sounded dry as she began in the brief role of the Sandman, but then both she and Angharad Morgan as the Dew Fairy sang delectably, as also did the chorus consisting entirely of children from the Old Palace of Whitgift School, and Trinity School, Croydon.

Although the orchestra was less numerous in personnel than might usually be the case, the twenty-year-old Ilyich Rivas coaxed some luscious Romantic sounds from it, and built up some exciting climaxes with more than a hint of Richard Strauss (who conducted the premiere of this opera). Only occasionally did the upper strings sound a little thin. Johann Strauss II was also suggested with an infectious lilt or dancing ease to the music, for instance as the children lark about in Act One.

This is a richly rewarding and thoughtful production, aimed at adults as much as children and treating the work as something more than festive entertainment.