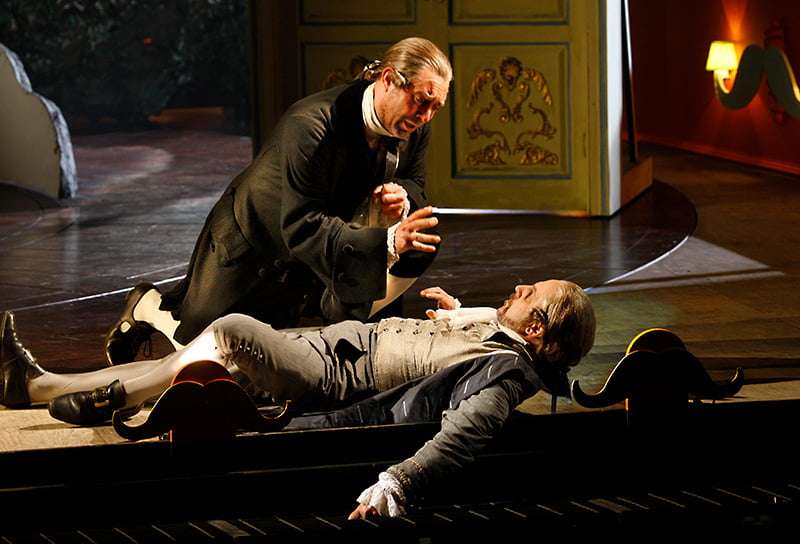 Circumstantially this Barber of Seville promises something of interest. A huge curly moustache adorns one of the facades of the Grange, perhaps hinting at a satire on the present fashion for facial hair amongst young (and not so young) men. And before the curtain rises, the surtitles screen announces “The Barber of Seville in England 1818 to 2018”, alluding to the fact that it was first performed in this country exactly two hundred years ago (two years after the first presentation in Italy) which might have betokened an imaginative exploration of changing perceptions of this now-perennial opera.

Unfortunately that is not to be. The moustache motif is repeated with tiresome frequency in Stephen Barlow’s production as an addition to the footlights to form the candelabra around the tiered seats of an opera house that forms that back part of the set, and most prominently in the form of two huge green boughs sprouting oranges (at least this is still Seville, just about) in front of Doctor Bartolo’s house whose exterior depicts the face of a young man (perhaps Rossini, given the sign unfurled at the very end of the performance, in case we have forgotten who the composer is). A barber’s chair is wheeled on during Figaro’s ‘Largo al factotum’ and an unsuspecting member of the audience dragged on to be lathered in foam, reducing this famous aria. Bartolo is similarly lathered later on, and Figaro’s shop is mimed, but there is no real on-target comment about hirsute fashions. 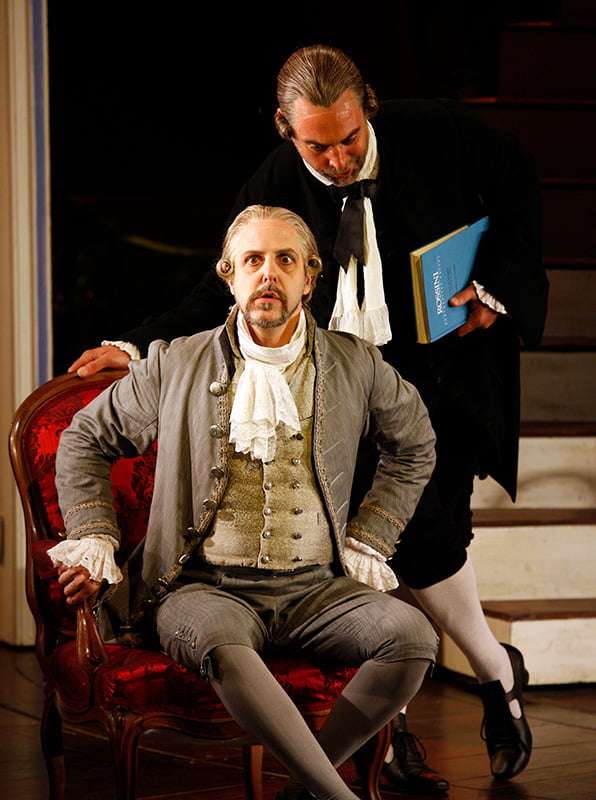 Traditions of performance of this opera are no more cause for intelligent comment than mixing up the eras of the various characters and set. Almaviva remains a figure of the twentieth-century – first clad in a tawdry T-shirt and denims, then as a soldier with a Sten gun, and later on as Don Basilio’s substitute music teacher in sports jacket and trousers. One wonders whether Barlow means to suggest that, just as Almaviva comes to Rosina’s rescue, so it is that only contemporary-style interpretations can ‘save’ the mainstays of the operatic repertoire. The chorus first appears in evening dress carrying instruments – and wearing moustaches – presumably evoking the late-Victorian or -Edwardian era, and later prance around in white T-shirts sporting the Twitter-style motto “#I love Figaro” (“love” rendered by a heart-shaped emoji, of course); and in the Act One finale, the singers become the police force of Seville, but in an ineffectual, sub-Gilbert & Sullivan sort of way. And so it continues, in a string of inconsequential episodes as though this is Britain’s Got Talent.

Doctor Bartolo’s house is the one point of focus, which revolves to reveal its Rococo interior, in the upper part of which is Rosina’s room. She, like Bartolo, Basilio and Figaro, remain elegantly rooted in the eighteenth-century, and we first see her imprisoned behind a birdcage structure, on a swing (perhaps alluding to the eponymous painting by Fragonard), effectively symbolising her bid for freedom, if hardly an original dramatic idea. An imaginative interpretation does come in the ‘Calumny’ aria where Basilio manifests his advice to Bartolo about the spread of news, gossip, and information (fake or otherwise) by tapping into the keys on his mobile to disseminate that digitally. 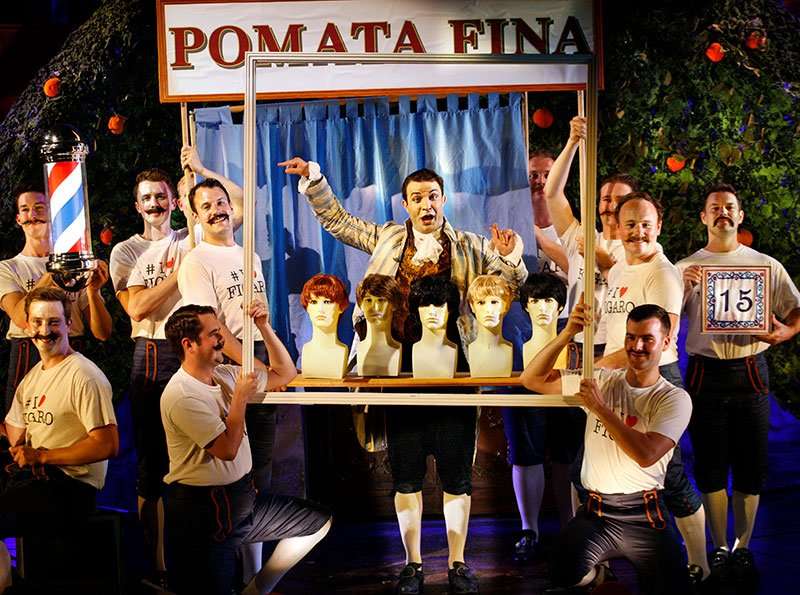 Josè Maria Lo Monaco’s appearance as Rosina provides the first striking musical sequence in this performance with the radiance and solidly drawn lines of ‘Una voce poco fa’, and she maintains such vocal distinction afterwards. Charles Rice’s Figaro and John Irvin’s Almaviva are initially more musically generalised and breathy, less idiomatic and secure in their grasp of the Italian words, which leads to a less-crisp attack on the music. They project with more lyrical refinement later on, though Irvin does not lose a slight reedy tone, nor stiffness in acting.

Riccardo Novaro exudes a certain austere authority as Bartolo, whilst retaining clear musicality, particularly as he demonstrates to Rosina the type of old-fashioned aria that he prefers, after she sings hers to Almaviva’s accompaniment (which Irvin partially provides on an upright piano). David Soar is a comic if discreet Basilio, acting as a useful foil to Bartolo. Jennifer Rhys-Davies impresses as the maid Berta, with lively if slightly squeally coloratura.

The Bournemouth Symphony Orchestra opens with a somewhat leisurely account of the Overture, and it takes a while for the opera to sparkle into life musically. But David Parry eventually creates more authentically Rossinian fizz so as to provide a welcome musical counterpoint to the visual action. The music, then, does at least salvage something worthwhile from a production that, in its pointless mixing up of different elements, feels like a clumsy sixth-form attempt to ape Monty Python-style surrealism.