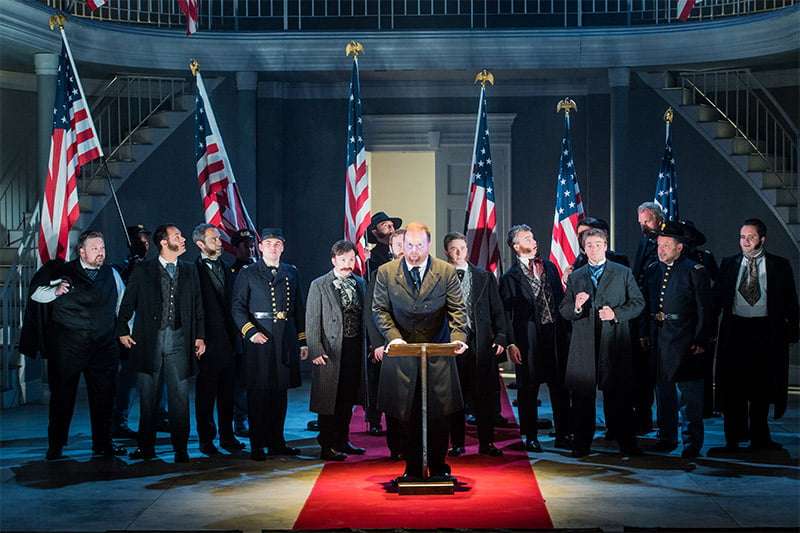 Grange Park’s Theatre in the Woods, now in its second season, is scrubbing up well with a new brick facade and new facilities. Once the interior is finished, this tiered opera house, neatly triangulated between Covent Garden and Glyndebourne, will be one of the prettiest. This year’s first opera (the company opened with Oklahoma!) is Verdi’s A Masked Ball, in its alternative version with the lead role of King Gustave III of Sweden replaced by Riccardo, governor of Boston in the United States, made for censorship reasons at the time of its premiere in 1859. I briefly entertained the notion that this might (as in Opera Holland Park’s 2009 staging) be a modern US take on a leader in love with another man’s wife, with murderous politicians circling for the kill, but that will have to wait a while.

Instead, the setting is late nineteenth-century, with the Stars and Stripes and a portrait of George Washington featuring significantly in the props. Stephen Medcalf has recycled the imposing fixed set that he and Jamie Vartan created for Grange Park’s staging of Wagner’s Die Walküre last year. It works fine for Governor Riccardo’s public rooms in Act One and for the ball in Act Three, less well for Ulrica’s cave, and not well for “l’orrido campo” where Amelia, torn with guilt over her (unconsummated) passion for her husband Renato’s best friend Riccardo, seeks the magic herb that will cure her from potential adultery. Ulrica’s dwelling is a shack where the fortune-teller does witchy things to a chicken (or, more likely, a cockerel) surrounded by a coven of twitching, blood-daubed and frankly ludicrous brides of Satan. This is pantomime sorcery at its most lurid, but the eerie gallows wasteland where Amelia goes alone at midnight, suggested by a few nooses slung over the set, is a disappointment for a stage-work that otherwise does not pull its melodramatic punches. 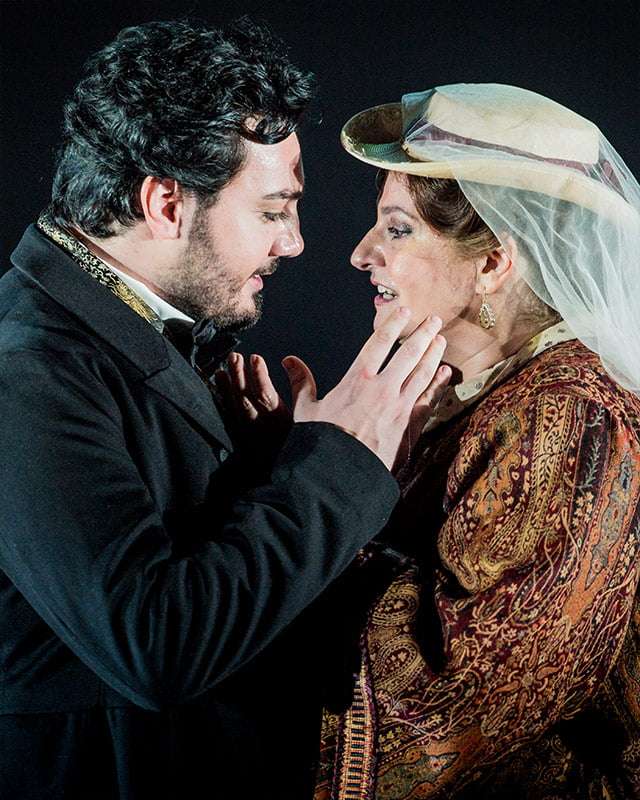 In an opera in which love, politics and supernatural dabbling vie for attention, the action lurches from one to the other with the main characters competing with it. Verdi’s music, though, has one of his most beautiful and flexible melodies, uses a very deliberate counterpoint to express the assassins’ machinations and has a sequence of outstanding ensembles. Gianluca Marcianò, with the ENO Orchestra, judges the score without any sense of exaggeration, always focusing on the love-tangle. He releases some very idiomatic blasts of Verdian flair, but he and his players are even more impressive in isolating and supporting the leads.

Vincenzo Costanzo’s Riccardo, presented here as a decent, liberal president-prototype ruling from behind a lectern, has plenty of lyrical warmth and elegance, but the Heldentenor demands are constrained. Amelia’s mystique is enhanced in many a production by the fact that we see her either veiled or in shadows until Act Three and her showdown with her husband, who reasonably thinks she is adulterous. Here, in her scenes with Ulrica and on the Gallows field, she is veiled like a Victorian bee-keeper. Claire Rutter’s mellow soprano suits Amelia’s transition from terror to courage and radiance in Act Two, with a forceful declaration of love heading off the lack of strong direction, and we get more of Amelia’s and Rutter’s temperament in Act Three. Roland Wood’s Renato is the best characterised of the three leads, his layered, attractive baritone, blessed with an impressive range, culminates in his magnificently sung ‘Eri tu’.

Teresa Gevorgyan is in fine coloratura voice as Oscar, billed as Riccardo’s page, but presented as a gender-bending, gun-totin’ riff on Wild Bill Hickok, and Elisabetta Fiorillo, a formidable contralto with a pronounced vibrato, made the most of Ulrica’s scene. The chorus ensures the impact of the ball, although these singers’ freeze-frame pauses to allow the assassination to unfold only emphasises the direction’s awkward tensions between clumsy stylisation and realism.