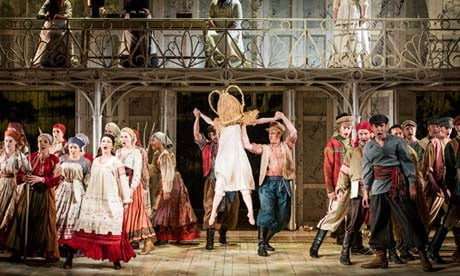 I hugely enjoyed Grange Park Opera’s pared-down staging with a young cast of Eugene Onegin, which the company brought to Cadogan Hall last September (review-link below) after the run at Nevill Holt of Stephen Medcalf’s full staging in preparation for opening this year’s main festival. Pushkin’s and Tchaikovsky’s romantic lost soul is no stranger to Grange Park – the opera has been staged before there, in 2000, and there is also the film version of the novel, directed by Martha Fiennes and starring her brother Ralph as Onegin, which used the beautiful Grange Park house as one of the locations. It’s in the genes, you might say.

Francis O’Connor’s fixed set works well. It’s a wrought-iron gallery that looks out, through a scrim covered in handwriting (Pushkin‘s novel? The fateful letter?) onto a vista of echt-Russian silver-birches and dappled sunlight (toned down, and with added snow, for the duel) and which also looks down into the various interiors, the gallery expanded for the St Petersburg ball, for example, although the white spiral staircase doesn’t exactly scream imperial glamour. The costumes are late-nineteenth-century (rather than the Byronic, rather sexier look of the novel’s period), which makes no point unless it was the possibility of serf problems fleetingly alluded to in the first scene. And was it correct that the footmen in the ball scene wore their hats indoors?

Medcalf’s direction manages the main characters fluently. I part company, though, with him over the effectiveness of characters frozen mid-motion while Tchaikovsky’s wonderful music works some particular magic or a dramatic emphasis is being drawn – it’s too mannered and laboured for such a direct plot. There are some interesting details – the very drunk Lensky taking over Triquet’s aria; Lensky and Onegin rolling the barrels of their pistols, Russian roulette-style, before firing at each other (inspired); and Prince Gremin brandishing his firearm at Onegin as the curtain comes down (less inspired). The three big dance-scenes were broad-brush, and choral choreography was awkward, so that the party guests’ dismay at Onegin’s and Lensky’s set-to went for little. (The chorus in terms of singing was excellent if not credited in the programme or on GPO’s website.) In the Cadogan Hall semi-staging, there was a very dodgy bit of directorial hanky-panky during the ‘Letter Scene’, which has wisely been dropped.

It’s all too easy for the title role to get sidelined, but Brett Polegato anchored the evening. It helped that he looked the part – lived-in, saturnine film-star appearance – and his characterful, engaged singing was very appealing. He easily ticked the usual Onegin aloof, supercilious, patronising boxes, but from the start he also folded in an interesting neediness, as a result making his meeting with Tatyana after the ‘Letter Scene’ more than usually poignant, and he really nailed his moment of truth at the ball.

It shouldn’t matter that both he and Susan Gritton are vigorously middle-aged, which inevitably tugs at credibility, but it does matter that Tatyana is just that bit younger than Onegin, if only in her behaviour, and there was nothing in Medcalf’s staging to suggest otherwise. Gritton, a luxurious, lyric soprano famed for her Mozart, Britten, Strauss and Handel roles, just couldn’t unload her sophistication to convince as a sexually-awakening girl, and attempts at skittish coyness fell flat. She inevitably redressed the balance as Princess Gremina, but she couldn’t escape vocal problems (announced before the performance). She managed the ‘Letter’ part, but the final scene had me fretting about her vocal safety. This was her first Tatyana, and I wonder – when she has recovered from her throat ailment – if her rich, seamless voice and open style is right for the role. The leads’ interaction didn’t flow easily, and that lack of focus wasn’t helped by the warm, well-sung but under-directed Olga of Frances Bourne and by the frail Lensky of Robert Anthony Gardiner, who lacked the vocal top, poetry and guileless passion for the part.

There were fine cameos from Clive Bayley (Gremin) and Stuart Kale (Triquet), and Nicholas Dwyer’s Zaretsky made its mark. Martyn Brabbins was particularly tuned-in to supporting the singers; the Bournemouth Symphony Orchestra’s Tchaikovsky was light on style but soulful enough.