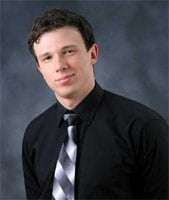 This was a long evening, if one that passed quickly. Having both of Brahms’s large-scale piano concertos in a single concert is not unique – over the years London concert-goers have witnessed, for example, Ashkenazy with Previn (the latter replacing Kondrashin) and Barenboim with Pappano – and for this Gold Medal concert the task involved two pianists. Coming as the central work, William Walton’s Cello Concerto – an expansive work, too – was a welcome contrast and shared the first half of the concert with Brahms’s B flat Concerto, which got off to an impressive start with a beautifully floated horn solo from (I assume) Kate Hainsworth and with Alexander Karpeyev introducing himself with a commanding and dynamic account of the opening cadenza. Much of the first movement was imposing – technically and emotionally (even with the suspicion that the tempo was increasing in the heat of the moment) and with the Guildhall Symphony Orchestra (senior students) offering well-prepared playing full of ardour and sensitivity.

However, by the end of the first movement something relentless was taking hold. This spilled into the scherzo, which was rather breathless, its agitation forced, and with nothing saved for the coda. To launch the third movement, Brian O’Kane’s tender cello solo was welcome balm, but the movement as a whole lacked the ultimate in inwardness, whereas the finale – far too quick and ‘straight’ – was without lightness and wit (it’s difficult to forget the recording that Arrau and Giulini set down nearly 50 years ago!) and became aggressive as Karpeyev forced his way along; no lilt, no insouciance.

In William Walton’s Cello Concerto (offering Mediterranean breezes) – written for Piatigorsky and first heard in Boston in 1957 – Bartholomew LaFollette struggled with intonation and tuning. Nor was the orchestra ideally tidy – newcomers to this work will not have heard it in its best light. The first movement ended up being too rhapsodic (Walton had already written the elasticity in) and the second movement scherzo needed more of an elfin touch from all concerned, although electricity crackled as the music progressed. The extended finale came off best, its variation/improvisation construction well caught, at once taut and free, and here LaFollette was more identified with Walton’s liberated if rigorous construction, not least the two solos that frame the orchestral flare-up. Tuning difficulties aside, LaFollette certainly impressed with his soulful and animated playing.

As for Brahms’s D minor Piano Concerto – magnificent! Sasha Grynyuk gave an exceptional performance – musically and technically – in which the naturalness of his playing and his total immersion into the music were combined to compelling effect and very revealing of the music’s contrasts and deep sentiment. Towards the end of the first movement Grynyuk managed to play a few bars not composed by Brahms (!), but managed to extricate himself very quickly, composure maintained. This was a wonderful traversal, the audience enraptured, and the orchestra and conductor caught up in the music’s drama and depth.

Throughout the evening, David Angus had supported the soloists gallantly – and quite often went beyond the role of ‘accompanist’. Amongst the members of the dedicated orchestra, Catherine Ring’s timpani-playing (in Brahms No.1) was particularly noteworthy in its restraint yet she ensured that every note was clear and meaningful. Sasha Grynyuk was indeed awarded the Gold Medal. Bartholomew LaFollette took the Glass Trophy.