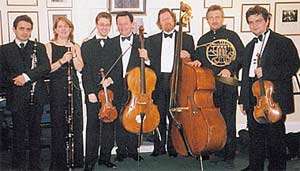 The first of two programmes featuring five of Mozart’s String Quintets brought a full and appreciative house for the Razumovsky Ensemble. According to an article from “The Independent” that was prominently quoted in the programme-book, the Razumovsky Ensemble “has blazed onto the scene with a new concept. It is more than a ‘flexible’ group’ with its founder, Oleg Kogan, choosing different colleagues for each concert from a pool of dynamic freelance soloist and section leaders from world class orchestras”. In theory choosing ‘horses for courses’ is all very well but in practice, as was clearly evident on this occasion, it can be a mixed blessing. There was a distinctly ad hoc feel to too much of these accounts, enthusiasm frequently substituting for polish.

Despite the claims made for it in the programme as a miniature gem and “one of the most treasured works in the string repertoire”, Schubert’s brief one-movement String Trio is nothing of the sort. Written in 1816, it is a perfectly agreeable work but only as the recapitulation is reached come those little harmonic shifts which mark the music as distinctively Schubertian. With consistently forceful playing from David Alberman and Oleg Kogan, it all emerged as rather effortful and lacking in light and shade; more finesse and charm was needed.

Some of this same over-forceful approach spilled over into the first of the two Mozart Quintets, K515. Now led by Gordan Nikolitch, there was a tendency to push the tempo in the opening Allegro which resulted in phrases being grabbed at rather than caressed or shaped, and intonation was frequently poor. Taken fractionally too fast for comfort, the lilting finale suffered much the same fate with its faster passages impossible to articulate cleanly at this speed. There were some good things in the slow movement, notably a poised duet between viola and violin, but the Minuet plodded, at once somniferous and heavy on its feet. Much was simply too loud, the music treated as an assault course.

The great G minor Quintet fared rather better although the breathless tempo for its opening Allegro militated against the music’s suppressed tensions emerging fully; however, the interplay of the two violas later in the same movement was especially memorable, as was the timeless Adagio, a moonlit garden scene of supreme melancholy which could have stepped straight out of the pages of “Le nozze di Figaro”. The lumpen account of the Minuet which followed was disfigured by some absurdly over-emphatic accents and – after a sensitive Adagio introduction – the carefree finale was attacked with a vehemence which would have been far more apt for Brahms’s string quintets.

Frankly, one cannot help the feeling that in Mozart quintets the time-honoured solution of augmenting an established quartet with a viola player (the Griller Quartet plus William Primrose or the Budapest Quartet joined by Walter Trampler) generally produces more stylistically integrated results. On this occasion, with too much approximate intonation and little sense of a common musical approach, an ad hoc group sounded just that.