Skip to content
LnRiLWNvbnRhaW5lcltkYXRhLXRvb2xzZXQtYmxvY2tzLWNvbnRhaW5lcj0iNmIzNDMzNmNmZTc3NWZiNGJlMTVjMmIwMzU3NWM1MjYiXSB7IHBhZGRpbmc6IDI1cHg7Ym94LXNoYWRvdzogNXB4IDVweCAxMHB4IDAgcmdiYSggMCwgMCwgMCwgMC41ICk7Ym9yZGVyOiAycHggZG90dGVkIHJnYmEoIDEwOSwgMTA4LCAxMDgsIDEgKTsgfSAudGItZmllbGRbZGF0YS10b29sc2V0LWJsb2Nrcy1maWVsZD0iODM3Y2ExZjc0MGRjZDdkOTdlMzQzOWMyYjIwMWZmZTMiXSB7IGJhY2tncm91bmQtY29sb3I6IHJnYmEoIDIzOCwgMjM4LCAyMzgsIDEgKTtwYWRkaW5nLXRvcDogMTBweDtwYWRkaW5nLWJvdHRvbTogMTBweDtwYWRkaW5nLWxlZnQ6IDEwcHg7IH0g
LnRiLWNvbnRhaW5lcltkYXRhLXRvb2xzZXQtYmxvY2tzLWNvbnRhaW5lcj0iNmIzNDMzNmNmZTc3NWZiNGJlMTVjMmIwMzU3NWM1MjYiXSB7IHBhZGRpbmc6IDI1cHg7Ym94LXNoYWRvdzogNXB4IDVweCAxMHB4IDAgcmdiYSggMCwgMCwgMCwgMC41ICk7Ym9yZGVyOiAycHggZG90dGVkIHJnYmEoIDEwOSwgMTA4LCAxMDgsIDEgKTsgfSAudGItZmllbGRbZGF0YS10b29sc2V0LWJsb2Nrcy1maWVsZD0iODM3Y2ExZjc0MGRjZDdkOTdlMzQzOWMyYjIwMWZmZTMiXSB7IGJhY2tncm91bmQtY29sb3I6IHJnYmEoIDIzOCwgMjM4LCAyMzgsIDEgKTtwYWRkaW5nLXRvcDogMTBweDtwYWRkaW5nLWJvdHRvbTogMTBweDtwYWRkaW5nLWxlZnQ6IDEwcHg7IH0g
Henze
Ein Landarzt – Opera in one Act, setting the short story by Franz Kafka
Phaedra – Opera in two Acts to a libretto by Christian Lehnert
[both sung in German with English surtitles]
LnRiLWNvbnRhaW5lcltkYXRhLXRvb2xzZXQtYmxvY2tzLWNvbnRhaW5lcj0iNmIzNDMzNmNmZTc3NWZiNGJlMTVjMmIwMzU3NWM1MjYiXSB7IHBhZGRpbmc6IDI1cHg7Ym94LXNoYWRvdzogNXB4IDVweCAxMHB4IDAgcmdiYSggMCwgMCwgMCwgMC41ICk7Ym9yZGVyOiAycHggZG90dGVkIHJnYmEoIDEwOSwgMTA4LCAxMDgsIDEgKTsgfSAudGItZmllbGRbZGF0YS10b29sc2V0LWJsb2Nrcy1maWVsZD0iODM3Y2ExZjc0MGRjZDdkOTdlMzQzOWMyYjIwMWZmZTMiXSB7IGJhY2tncm91bmQtY29sb3I6IHJnYmEoIDIzOCwgMjM4LCAyMzgsIDEgKTtwYWRkaW5nLXRvcDogMTBweDtwYWRkaW5nLWJvdHRvbTogMTBweDtwYWRkaW5nLWxlZnQ6IDEwcHg7IH0g 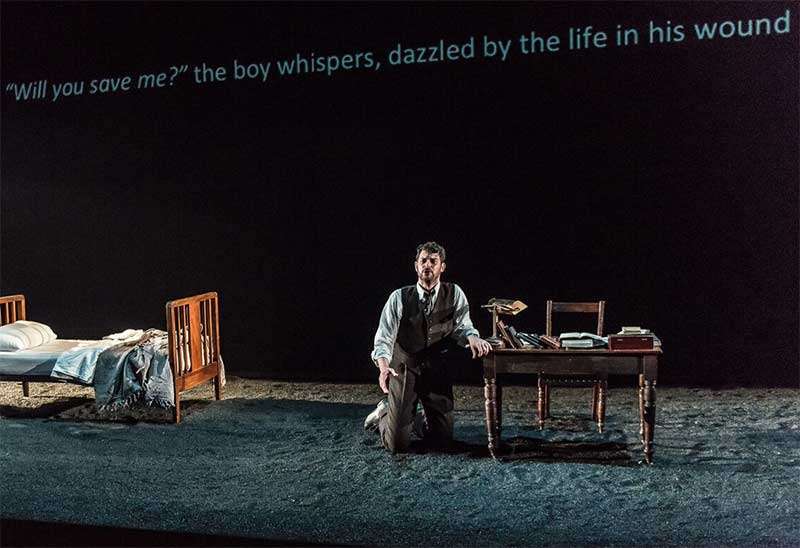 Back in 2010, reviewing (for Classical Source) the UK premiere of Hans Werner Henze’s penultimate opera, I wrote: “Certainly worth re-hearing (I look forward to the opportunity)” – and now the opportunity has arisen courtesy of the ever-enterprising Guildhall School Opera Course and its ongoing programme of fully staging three operas a year at the Silk Street Theatre. Although it was not stated, I think this marks Phaedra’s UK stage premiere, as the Barbican Hall performance was presented as a concert.

At the Guildhall School Phaedra is paired with a much earlier Henze opera, Ein Landarzt (A Country Doctor), written in 1951 (although the programme states the date as 1952) as a radio opera, involving some electronics, but revised for the stage in 1964 for Dietrich Fischer-Dieskau), and further revised in 1994, reinstituting the other characters’ voices of Franz Kafka’s short story. This production opts for the 1964 score, set naturalistically on a narrow strip at the front of the stage, with just a bed, table and chair for Martin Hässler’s trim, bearded doctor dressed in timeless tweed suit to roam as he tells Kafka’s eerie tale of being called away to treat a patient, even while the community resent him. With Hässler’s clear diction and warm voice against Henze’s short, transparent score for 19 players, Ein Landarzt proves an involving beginning to proceedings, aided by excellent surtitles projected, white on the black back drape, across the width of the stage. 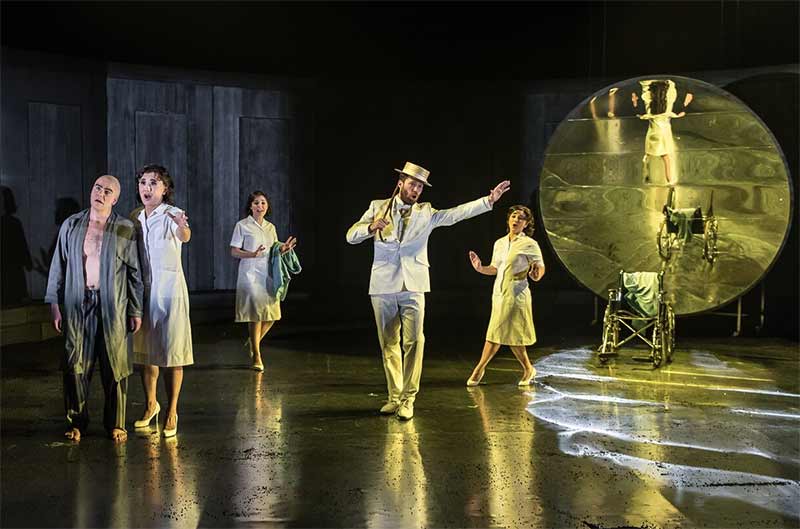 The surtitles for Phaedra were not as strikingly produced, confined as they were to the single television screen above the stage (although they were not difficult to read), as Ein Landarzt’s set disappeared completely, save for the earth-like detritus spread on the floor. What was revealed at the back of the stage was, appropriately enough, a crescent of doors (albeit in rather brutal, concrete architecture) with a plain acting area, save for a mirrored disc, and a rope coiled, labyrinth-like over the dark flooring. Scene titles were projected across the crescent.

Rather confusingly, Henze’s Phaedra starts with a flashback of Theseus killing the minotaur, although the only singing protagonists are Theseus’s son Hippolytus, his stepmother Phaedra and rival goddesses: Artemis (countertenor, allied with Hippolytus) and Aphrodite (for Phaedra). In Ashley Dean’s production they are all in white, those who are supernatural distinguished by bald pates, looking rather too-much like extras from Star Trek, and I was rather confused in this first scene. From there on, safer ground, as the first Act follows Euripides’s (and Seneca’s and Racine’s) account of Phaedra’s illicit love for her stepson and, following his rejection of her, her intemperate revenge in claiming to Theseus that his son had raped her. The final scene of the Act describes (though does not portray) Hippolytus’s downfall in the face of the Minotaur, resurrected by (the unseen) Theseus.

Confusion was confounded in the second half (during the interval the detritus underfoot had been swept aside), when those who are supernatural wore various wigs, and Hippolytus – patched up by Artemis in a rather Professor Pat Pending (or Heath Robinson)-esque operating theatre set-up, after which Hippolytus is confined within a glowing ring, lowered over him – lost his. Here, in a continuation of the story based on Roman tradition, the two goddesses and Phaedra (now a vamp, in suspenders) still fight over Hippolytus, before he eventually escapes the cage, courtesy of an earthquake (represented through loudspeakers, though if the production utilised Francesco Antonioni’s original tape it was not credited), and reinvents himself as the King of the Forest. Tradition has it that Diana (the Roman equivalent of Artemis) set up a shrine to him in a grove at Like Nemi, not far from Henze’s Italian home for 40 years. Curiously the work ends with a dance – the Minotaur eventually making an appearance (Rick Zwart, who sings the country doctor in the alternating cast), affording Henze a quintet – which, as before, I likened to a Brahms Liebeslieder waltz.

Thankfully, vocally, the cast was more distinct than the costumes they performed in and all responded well to Henze’s often lyrical writing. Lawrence Thackeray’s strong tenor held its own against the three female characters, with countertenor Meili Li (common to all four performances) a striking Artemis, whom Hippolytus worships, annoying Laura Ruhi-Vidal’s Aphrodite who – like Ailsa Mainwaring’s Phaedra – loves Hippolytus. You see, what a tangled web Henze weaves! Curiously in the end – bathed in oranges and yellows, via the return of the mirrored circle at the back of the stage – it seems more Hippolytus’s story than Phaedra’s.

I still haven’t cracked the work – but I hope it’s not another five years before I can have another go. All credit to the orchestra – swelled to 25 for Phaedra – under Timothy Redmond’s expert direction – and to the Guildhall Opera Department for continuing to produce such innovative and varied programming for its students and audiences.