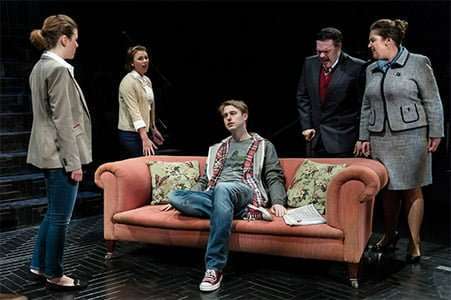 We may have had to wait for Britten centenary celebrations to begin, but this Guildhall School of Music production of his opera Owen Wingrave (commissioned by BBC Television and first broadcast on 16 May 1971), kick starts a month that certainly makes up for the wait – with Peter Grimes, Death in Venice, and Gloriana all opening imminently in and outside of London. If they are as good as Kelly Robinson’s Owen Wingrave then we’re in for bountiful productions of Britten.

In preparation for this production I revisited both television versions – the BBC commission, filmed at Snape Maltings, with the composer conducting the English Chamber Orchestra and a stellar cast headed by Benjamin Luxon’s Owen and including Peter Pears, Heather Harper, Janet Baker and John Shirley Quirk, and Channel 4’s re-make from 2001, conducted by Kent Nagano with a cast finely led by Gerald Finley. The former is set, as in Henry James’s story, in Queen Victoria’s days, while director Margaret Williams for Channel 4 updated it to 1958. So it was fascinating to see Kelly Robinson Guildhall School bringing it to the present century, opening with video footage of Camp Bastion in Afghanistan with actors playing camouflaged squaddies setting the stage, as well as – during the Prologue – summarily burying a plastic-wrapped body, the dull thud of it hitting the ground punctuating Britten’s brittle invention. 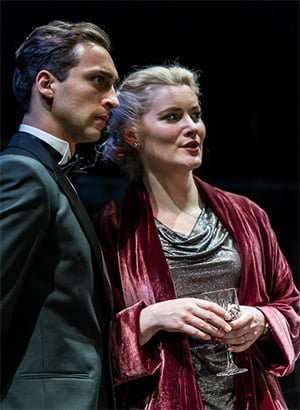 Madeleine Boyd’s traverse set is stark and black, with the audience along either side, orchestra at one end and black steps (barely visible to start with in Mark Jonathan’s atmospheric lighting) at the other. High above are blank picture frames, lit as Britten’s music describes the long line of belligerent Wingraves: a family that prides itself on its military history to the exclusion of all else. The opera tells of the last of the Wingrave line, Owen, who even after undergoing army training and studying military history, turns against the family profession to preach pacifism.

The updating works surprisingly well, even if the initial video images of Internet pages of Afghan news footage, or coffins with dead soldiers arriving at Wootton Bassett, are a little blurry. Somehow the old-fashioned attitudes of the Wingrave family and entourage, including the Julian’s (mother and daughter, Kate, who is Owen’s intended) – those of unquestioning service to country – seem to be thrown much more into relief when faced with Owen, who might change from his army fatigues to go home, but only into jeans (even at the dinner table, where all the others are in formal dress). Kate, as a Sloane ranger, seemingly as oblivious to the modern world as the rest of them, worked particularly well. It was if the old country pile – Paramore – where they live has cut them off completely from the outside world.

I’m minded of John Bridcut’s stated dislike of this opera (in his Faber Pocket Guide to Britten), citing the cardboard caricature nature of the characters (except Coyle) – but I’d argue Albert Herring is more appropriately tarred with that criticism – look at Lady Billows and Mrs Herring. I’d go further. However heretical this might be to others, I much prefer Owen Wingrave to Britten’s previous Henry James opera, the so-called masterpiece of The Turn of the Screw, where the very nature of the supernatural story is a complete turn off, which even Britten’s music can’t disguise. At least in Owen Wingrave there is a potent debate underlying the action, even if portrayed with rather broad brushstrokes. Robinson’s updating certainly seems to make better sense of the arguments, and the inhabitants of the dilapidated Paramore (where gauzes have to adorn the chandeliers in case bits fall off) seem more believable. I thought also that David Matthews’s remarkable reduction of the score, to just 16 players, worked perfectly in the space. It was impossible to tell whether the offstage forces were live – the brass sounded so, the children’s choir, which sounded atmospherically muffled, was perhaps recorded, but there was a subtlety to the music that one doesn’t get on either of the DVDs, with Britten’s fuller orchestra. 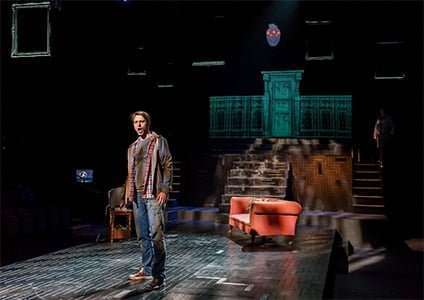 Guildhall Opera Department continues to mount excellent productions which can hold their own with any British opera house. German baritone Benjamin Appl – tall, blond and in Prince William mould (making his girlfriend Kate rather appropriate) – led a fine cast with exemplary diction (mostly carrying to the audience behind them when they were facing the other bank of spectators). Appl was particularly affecting in his harp, piano and vibraphone-accompanied paean “Peace is not confused, not sentimental, not afraid” just before the end, and he was matched by an impressive Joseph Padfield as Coyle and Samantha Crawford as Mrs Coyle, the outsiders who have most sympathy for Owen, while Adam Smith embodied Lechmere’s boyish gung-ho enthusiasm with ease.

Gérard Schneider and Roisin Walsh, as father and daughter Wingrave were suitably forceful in their misguided view of their family’s importance, while Schneider as the narrator at the start of Act Two sang ‘The Ballad’ (of Owen’s predecessor – a young boy – who had refused to fight a friend and was killed by his father in the room, which is now haunted) with tonal aplomb. The eerie video of the boy being taken to punishment by his father – in black and white – was suitably atmospheric. Raphael Papadakis may not have looked old enough to be the mother of Catherine Backhouse’s Kate Julian, but both excelled, particularly in the scene where Owen returns from the interview with his grandfather having found out he has been disinherited. Papadakis as Mrs Julian crumples at the thought that her losing the very roof over her head depends on her daughter marrying; with Owen no longer to inherit Paramore, Kate has no future. The repercussions of the situation were extremely well brought out as were characters’ selfish reactions to it.

While the final image (it would act as a spoiler if I divulged it) is perhaps open to a separate debate, this production makes an eloquent case for Britten’s Owen Wingrave. It is sufficient to mention that time and time again I was drawn from the staged action to look at the instrumental ensemble, arrayed around conductor Dominic Wheeler at one end of the room: the playing was phenomenal, and a pleasure to watch – let alone to listen to.