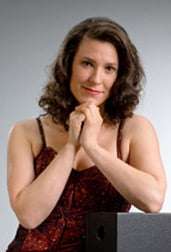 Arriving late, due to problems on the Underground, I entered St John’s to be greeted with a very stylish performance of Beethoven’s Opus 33 Bagatelles in which Henriette Gärtner treated each piece as a polished diamond, rather than as throw-away miniatures. It was followed by a performance of the so-called ‘Moonlight’ Sonata which included a first movement of elegant poise and poetry, a dancing middle movement and a finale full of passion – Charles Rosen wrote “it is the most unbridled in its representation of emotion … its ferocity is astonishing.” Gärtner understood this and played with real fire in her belly.

It was the recital’s second half which held most attraction for here we were given a real example of the virtuoso’s art, but never at the expanse of musicianship. Too often transcriptions are frowned upon – Stokowski’s versions of Bach for orchestra are still viewed with contempt by some – but when heard in the hands of an intelligent musician we can hear the music for what it is; a homage to the original composers. Tausig’s version of J. S. Bach’s famous Toccata and Fugue was fascinating in its clear-cut lines and full use of the keyboard. Not for one moment did I miss the colour of the organ. Henri Herz wrote many salon pieces and, despite the massive demands made on the pianist in this set of Variations, there were still flashes of the salon in the piece, although, it must be said, this is no salon piece.

Strangely, in this context, Liszt’s celebrated Rigoletto Paraphrase seemed like a mere five-finger exercise! It seemed as if we were listening to the parent of the transcription and in this situation its appearance was all-the-more fascinating. As a moment of respite, Lia Levinson’s arrangement of Schumann’s “Der Nussbaum” was as welcome as a glass of water after imbibing some heady brew. Levinson was a Russian pianist and this was her only transcription; it’s a beautiful re-imagining of the song, full of fioriture, and it easily wove its delicate spell.

For her finale, Henriette Gärtner took the bull by the horns – Tausig’s manic arrangement of ‘Ride of the Valkyries’ (which begins Act Three of Wagner’s “Die Walküre”). We were back in the world of the overt virtuoso transcription, Gärtner rising to the challenge with aplomb, giving a hair-raising reading, and displaying the most intelligent pedalling.

This was a stunning show of the most phenomenal pianism, Gärtner knows how to match technique with musical intelligence. She gave us three interesting encores. First we had Tarika by Peter Feuchtwanger, a thrilling work, one which sets out to make music first, the excitement coming later. Following this we had Jaroslav Ježek’s Bugatti-Step, a wild rag-time piece. Ježek was a Czech composer (1906-1942) who studied with Jirák, Josef Suk and Alois Hába, becoming a popular jazz composer in pre-war Czechoslovakia. It brought the house down. Finally, there was the UK première of a recently discovered Albumblatt, Die Ahnung, from 1838, by Schumann. Thus, after mighty pyrotechnics the evening ended with the most perfect calm. I cannot praise Henriette Gärtner enough for her programming and her exemplary performances.