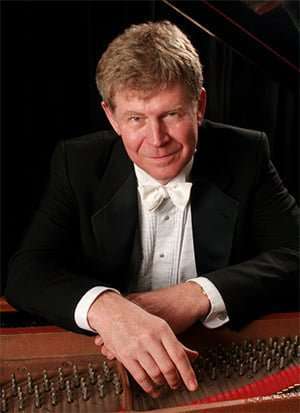 This was the penultimate recital in Ian Hobson’s project of performing Brahms’s complete piano works, including chamber music. The evening was a total delight, filled with many of Brahms’s loveliest melodies performed with both virtuosity and deep affection. Hobson and Csaba Erdélyi started with the First of the pair of Sonatas of Opus 120, which Brahms wrote for clarinet and piano, but also published alternate versions for viola. In the opening Allegro appassionato, Erdélyi’s playing of the principal themes was quite touching, his instrument giving them a rich, dark cast. That mood continued into the Andante, in which the viola sang sweetly, supported by the piano’s harmonic underpinning. Hobson took a more active role in the charming Allegretto, carrying the melody as often as not, and the finale, based on a catchy theme introduced by the piano and echoed by the viola, moved at a brisk pace.

Hobson continued with a brilliant reading of Opus 118. In the Viola Sonata he had the piano’s lid closed and modulated his volume to meld with the viola’s delicate sound, but for the Klavierstücke the lid was raised and he played with far greater power and a wider dynamic range. Hobson once again demonstrated his deep understanding of Brahms’s harmonic and melodic vocabulary. The Opus 118 collection begins with an A minor ‘Intermezzo’ – an appellation that Brahms assigned to many of his piano miniatures, almost at random, as the title does not connote any defining characteristic. Hobson attacked it with vigor and impressively. In this and what follows, he found a way to articulate, within the clusters of notes, each of the various voices that Brahms had placed, and sometimes hidden, there. The A major ‘Intermezzo’ (No.2) was the melodic highpoint; both in its gorgeous initial idea and in the contrasting middle section. The strong rhythmic pulse and rich harmonies of the G minor ‘Ballade’ made it the dramatic centerpiece, Hobson handling with finesse the return from the lovely central tune to the opening theme. The remaining pieces are in a gentler vein. Hobson created an ethereal aura in the F minor ‘Intermezzo’, and nicely contrasted the spacious opening subject of the F major ‘Romanze’ with the charming, trill-laden song that followed. Lastly, Hobson made the E flat ‘Intermezzo’ perhaps the most fascinating of all, beginning with a non-harmonized phrase that then receives a swirling accompaniment as it develops, transitioning to a potent central section, then returning to its opening lyricism and fading away with quiet chords and a final rising scale.

To conclude was Erdélyi’s arrangement of Brahms’s G major Violin Sonata. He was inspired to create this transcription after hearing Janos Starker’s performances in the 1980s of a cello arrangement made in 1879, the same year as the violin version, but only discovered by a researcher in 1974. Erdélyi drew on both the violin and cello editions to create his viola version, which he completed in 1991. However, when it later came to light that the cello composition had not been done by Brahms, as was previously believed, Erdélyi undertook revisions to adhere as closely as possible to the composer’s original score.

It was a spectacular success here, presenting Brahms’s glowing melodies in rich timbres even more appropriate than those of the violin. The Sonata’s essence lies not in display, but rather in the intimacy of the partnership between two artists, and in that regard Hobson and Erdélyi excelled. The work began sweetly with the violist’s elegant phrasing of a melody that blossomed gloriously. After the dramatic passage and upward flourish that ended the opening movement, Hobson began the Adagio with a lovely, but somewhat sad, theme that was soon taken up by Erdélyi over repeated two-note figures on the piano. Both players intensified the atmosphere until the gentle ending. The finale features a charming theme, introduced by the viola over rapid writing for the piano, which more or less preserves the melancholy ambiance of the preceding Adagio. Eventually reduced to its barest elements, with soft viola chords over delicate piano arpeggios, the theme faded away in the final bars. The musicians ended on a happier note – with music originally written for viola (a bassoon adaptation followed) – Carl Maria von Weber’s Hungarian Rondo given without its Andante introduction.