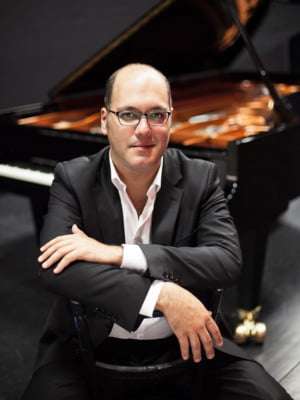 Based in Berlin at the Universität der Künste, the Austrian pianist Gottlieb Wallisch, a former student of Heinz Medjimorec in Vienna, is one of those artists allying fluidity of finger-work and muscular power with boundless curiosity for the new and unusual. He is a cultured classicist (he’s recorded Mozart and Haydn Sonatas for Linn), an orator for German romanticism, and a lively, capable modernist.

This cleverly chosen programme reflected his strengths. The Bach was cool and elegant, quietly contrasting dance exteriors with inner counterpoints and phrased conversazioni: a mature, musically considered reading content to remain within the bounds of unhurried civilised taste. Schubert’s ‘Wanderer’ Fantasy was gritty and tough, identifying as much with the composer’s Bacchanalian discovery of cyclic organisation as his increasingly violent rejection (like Beethoven’s) of the comfortable other face of Biedermeier Vienna in the 1820s. Disinclined to labour issues, Wallisch found unaffected poetry in the song inspiration of the slow movement, more interested to scale than purl the ornamentation, in the process drawing links nearer to Hummel than Thalberg. The glacially treacherous ‘white note’ ending, like the hewn in tempo semiquaver octaves of the first part, raised the temperature with a touch of athletic gloire.

Based on Schubert’s Divertissement à la hongroise, Liszt’s seldom-heard Ungarische Melodien (1838-39) had swagger and attitude, big on virtuosity and sweeping arcs of sonority. Here was Schubert catching the exotic voice and cadence of a racially many-dimensioned place and time; here was the long-coated Liszt of the Danube floods, the ‘only’ pianist in the world, patriotism awakened, returning to Hungarian soil. Wallisch had the measure of the style, a sense of rhetorical flourish, a grasp of colour, allusion and tenor registration. The contrasts of major-key repose found him as his most expressive, honest to the sweetness of the moment without lingering unduly or sentimentally.

Sebastian Themessl was born in Innsbruck in 1975 to a Viennese family of musicians. He studied in Vienna with Erich Urbanner, and then in Zaragoza, Siena, Rome, Prague and Naples. Presently based at the Conservatory of Innsbruck and the Universität für Musik und darstellende Kunst Wien, his catalogue inclines towards traditional genres cloaked in philosophical enigmas and questions. Along with Jordi Savall he shares Canetti’s view that “music is the true living history of humankind, we yield to it without resistance because what it says relates to our feelings; without it we would be left with only fragments.” Premiered by Wallisch in Yerevan (Armenia) in 2009, Crag and Tail refers to, and imagines, the sharp hills and soft slopes of the Scottish Highlands – for Themessl a landscape “grinded off and eroded by ice and time.” It’s an affective piece that opens and closes statically, misty chords and melodic strands gradually vibrating sound into motion. In between comes steely Lisztian explosions, the instrument torn and jangled into a Snow Queen grotto of low fundamentals, harmonically intricate middle regions, and ringing, circling overtones.

The renovated eighteenth-century Spanish Baroque Auberge de Castille, Office of the Maltese Prime Minister, is an intimate venue with hard reflective surfaces (stone walls, wooden floors, high ceiling). The house piano, though, a 1958 New York Steinway D (361850), has seen better days. Its bass and middle registers may be tolerable enough, but the treble end is hammer-worn and hard-pushed. A comprehensive overhaul and responsible regulation and voicing are needed.

The audience proved distractingly noisy, thinking nothing of talking, checking cell-phones, moving chairs, or walking about – at one point in the Liszt prompting a rightly unforgiving glare from Wallisch. That concerts are neither tea-parties nor pre-dinner cocktails nor yet fashion parades simply didn’t seem to have crossed anyone’s mind. Outside, cannonading festa fireworks rocked the town. Wallisch the professional came through with flying colours.