Handel
Water Music – Suite in F; Suite in D
Purcell
Dido and Aeneas – Opera in three Acts to a libretto by Nahum Tate [sung in English, with English surtitles]

Presented as a part of its year-long “Isle of Noises” series which will feature “landmark classics inspired by the British Isles” since 1689, the London Philharmonic’s foray into the earliest part of that period oddly juxtaposed Purcell’s only fully-fledged opera, Dido and Aeneas, with Handel’s Water Music. Other than their both having been written in London, it is hard to see any other connection between them. Perhaps it would have been better to set Purcell’s work within the context of other music from its own time, or even paired with the similarly proportioned Venus and Adonis by John Blow, usually regarded as the first English opera. The programme note’s unqualified comment that Dido is the best-known Baroque opera is also a dubious, and decidedly Brexit-era, parochial claim given that audiences globally would probably think of one of Monteverdi’s or Handel’s masterpieces first. 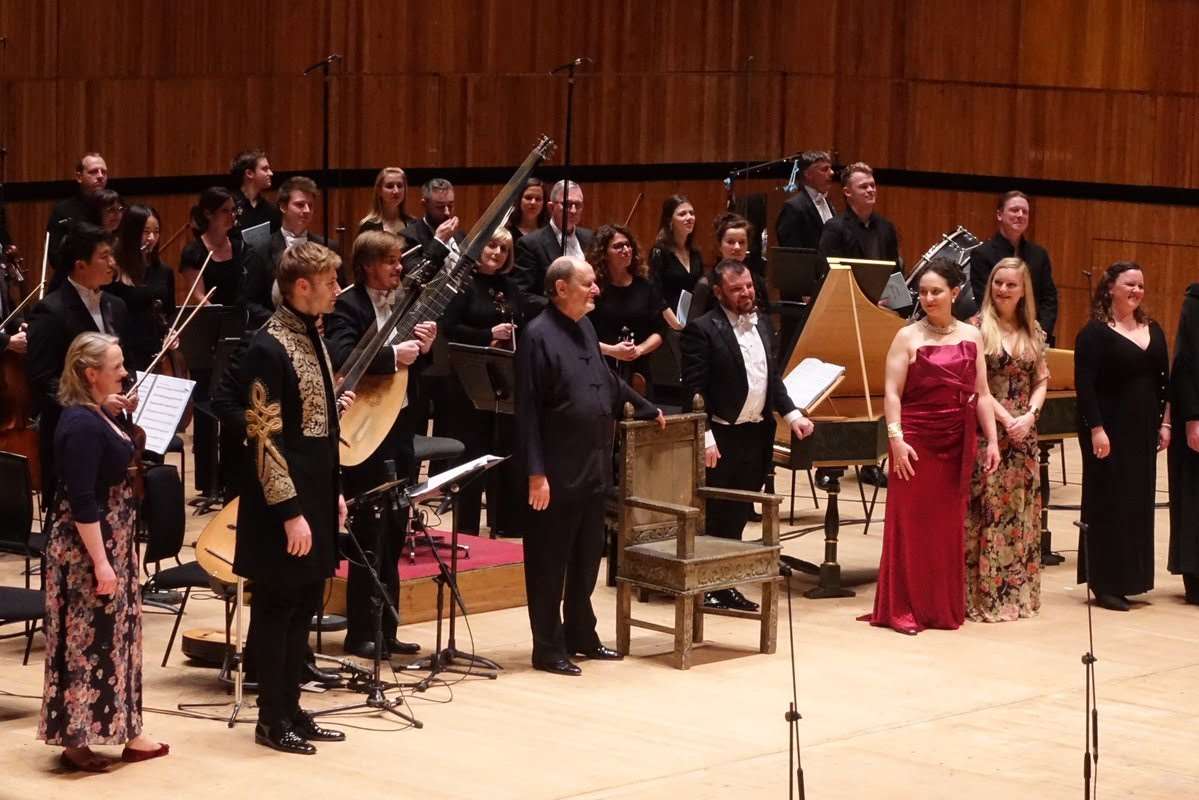 Be all that as it may, the LPO clearly enjoyed preforming these classic Baroque works which are now otherwise virtually banished from the repertoire of symphony orchestras. Having tackled Die Walküre just a couple of days previously, the LPO under Sir Roger Norrington’s direction gave a delightfully poised account of Purcell’s short opera, not overlaying it with any proto-Romantic depth, but imbuing it with fervent pace in the flow of its numbers. The instrumental sections and, with The Schütz Choir, the choruses came to life with a balletic freedom and vigour, but offered a serious, dramatic presence when accompanying the voices, or in the quietly forlorn and wispy Overture (performed without harpsichord) presaging the tragedy to come.

The vocal soloists were helpfully distinguished between the generally more sober character of the principal protagonists and the somewhat more lurid, vibrato-rich approach by the witches. Marie-Claude Chappuis was impressively even and nobly restrained as Dido (notwithstanding ‘A’s as though with an umlaut, as at the start of her lament “When I am laid in earth, may my wrongs create”). An expressive musical swoop tellingly forged a connection between her opening love-sick air and her final deathly song. Lucy Crowe and Anna Dennis offered contrast as Belinda and the Second Woman respectively. With only recitative-like interjections given to Aeneas (never any sustained arioso) Benjamin Appl had no opportunity to fall into any lyrical stride, but his breathy declamations perhaps suggested a certain fecklessness and indecision on the character’s part. Edward Grint led the witches with the more strident, volatile delivery of their music. The semi-staging (not attributed to anybody) movingly underlined the work’s neo-Classical balance, with its elegant gestures.

Norrington conducted a generally crisp and rounded interpretation of two of the Suites from Handel’s Water Music (omitting the less-commonly encountered third in G). In the F-major Suite to start, the abstract movements were sensibly grouped first, performed with a suitable stateliness, and even also a touch of vibrato, before giving way to the dances where the rhythms were mostly lithe and characterful, for example a fleet-footed ‘Bourrée’ was like a quick dash on tiptoe. The ‘Hornpipes’ of both Suites failed to take off with the usual vigour, Norrington opting instead for a sighing sort of articulation in the F-major, and a broad pace for that in D-major.

In the latter Suite, the two resplendent trumpets neatly contrasted with the warmer, mellower tone of the horns positioned at the opposite side of the orchestra, whilst the other concertino instruments were already in place antiphonally to amplify in spatial terms the different colours which Handel exploits. Sat down on a swivel chair, Norrington swung attentively between different groups and – with a mischievous glint in the eye – also round towards the audience to emphasise touches of humour at the cadences, and particularly at the broad, almost symphonic climax of the symmetrical Allegro-Andante-Allegro section near the beginning of the F-major Suite. With Handel’s propensity towards quirky ceremony in his music, this performance reminded that it works quite as well with modern as much as period instruments.