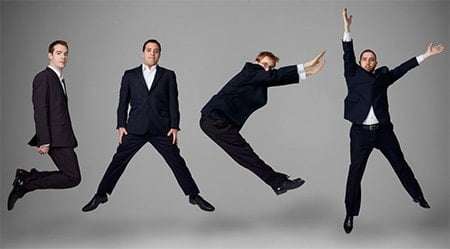 Following on from its previous Wigmore Hall’s appearance (preserved on its CD label), the JACK Quartet returned for another impressive recital to confirm the legacy of such as the Arditti and Composers ensembles is in safe hands, and both have championed the String Quartet (1931) by Ruth Crawford Seeger. The JACK musicians had the measure of this radical reassessment of the genre: one which abounds in the ‘dissonant counterpoint’ the composer had made her own at the time, with the antagonistic interplay of the opening movement, teasing canonic intricacy of the scherzo, intensifying harmonic layers of the Andante and heady rotational asymmetry of the finale vividly projected in this gripping account.

Next came the first hearing of Visions and Revisions (2013) – Christopher Trapani’s radical take on the Bob Dylan song ‘Visions of Johanna’ (a highlight of his recklessly over-ambitious 1966 double album, Blonde on Blonde), whose constantly metamorphosing sequence of five verses and five refrains is translated into a questing search for continuity in which the original’s chords are an increasingly vestigial presence prior to the music breaking out onto a new formal and expressive plateau. Superbly realised here, Visions and Revisions can take its place within that line of similarly unequivocal reassessments of earlier (and not necessarily popular) music in which the source material has been transformed beyond all recognition.

Although a tribute to Elliott Carter on his centenary, Exordium (2008) finds Brian Ferneyhough intent not on alluding to the dedicatee’s own music but rather paying homage to its ever-more laconic obliqueness via a sequence of 53 fragments that follow on from each other in a process of mutual exclusivity. What results is a mobile of volatile shifts in mood and perspective, which pointedly admits of a certain humour through the way that specific timbres and textures are often casually thrust aside by their successors: the piece pursuing an upwards trajectory that does not so much conclude as enfold itself into nothingness with a barbed elegance that the late American composer would doubtless have appreciated.

Especial interest was attached to the First String Quartet (1985) by the then late-teenage Julian Anderson which had its premiere just six months ago. This nine-minute exploration of the ‘‘colour of sound’’ (to quote the composer) has all four instruments playing, more or less continuously, in a densely translucent and always-evolving texture whose recourse to the overtones of the harmonic spectrum and non-standard tunings audibly prefigure the composer’s future concerns. Complex though never abstruse, the piece more than justifies its belated inclusion in Anderson’s official catalogue and should provide an arresting foil to its successor which is to receive its premiere at this venue (by the Arditti Quartet) in four months’ time.

After the interval, a rare revival (not there have been many performances anywhere in the UK of his music these past two decades) of music by Horaţiu Rădulescu – harbinger of the future of Western art music or perennial cult composer accordingly to preference. Rădulescu’s Fifth String Quartet (1995) is typical in its uncompromising integration of means towards potent ends: playing for just under 30 minutes, it derives from whole-scale re-tuning where only the upper two strings of the violin and lower two of the cello remain unaltered – the latter instrument’s lowest note providing the basis, conceptually as well as timbrally, of what follows. Radical in its re-imagining of the medium’s potential though it undoubtedly is, the work’s kaleidoscopic range of layers and textures is given coherence by that relative uniformity of pulse such as enables the listener to keep up with and even anticipate those dizzying sonic transformations that the composer is intent on effecting. Whatever its inspiration in the Tao Te Ching, this is music that pursues a singular and inimitable path.

A piece that makes no false concessions, it was gratifying that the JACK musicians not only took on its challenge but met it with technical panache and interpretative insight. It was gratifying, too, that the near-capacity audience was young in age as well as in spirit: whoever claims that radical new music has no future in the UK needs to think again.