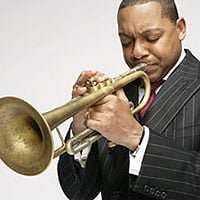 Rounding off the Barbican Centre’s contribution to London 2012 and the Jazz at Lincoln Center Orchestra’s “Associate Artist” residency, Wynton Marsalis’s Swing Symphony received its UK première. It reunited Simon Rattle with Marsalis and the work which he premièred in Berlin on 10 June 2010. The Barbican was a co-commissioner, along with the New York Philharmonic (US premiere under Alan Gilbert on 22 September 2010) and the LA Philharmonic, but you wouldn’t find that out from the programme.

In what is probably the least useful note I’ve ever read, the ‘article’ about the Swing Symphony omitted even to tell us that the work had six movements – or, indeed, anything about the work at all. Reading like some lame press release, it talked in the future tense whereas – given the work has performance history – the past tense of two years would have been appropriate. 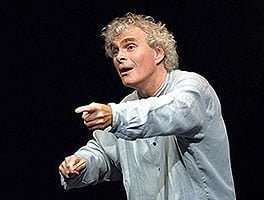 My annoyance was compounded by post-concert research that adds immeasurably to the enjoyment of the music. Obviously New York audiences fared better (although because of TV broadcast complications they only heard five of the six movements – the full version will be given an outing in May and June 2 next year). LA audiences had a comprehensive note and all so-far completed six movements, which Leonard Slatkin conducted in February 2011.

And … Marsalis has a series of short videos on his website, which goes through the work movement by movement and that he intends a seventh movement, as the penultimate one, which references the music of Ornette Coleman and John Coltrane.

Briefly, Marsalis offers a musical history of swing, starting with ragtime (using progressions directly lifted from Maple Leaf Rag) and, in the first movement, moving to New Orleans. The second conjoins the Charleston and Tango and references Happy Days Are Here Again. The third utilises music of the Midwest, including Kansas City Swing, the slow Body and Soul (the solo saxophone passing over musical honours to the cello section) and Sing, Sing, Sing including a spot for timpani. Bebop comes to the fore in the fourth movement, with passing reference to Dizzy Gillespie (Things to Come – a belated first solo for Marsalis, as Rattle puts his baton down and leans back on the podium), before the orchestral percussion section gets to shine in a vigorous mambo section, and then temperatures cool in passing reference to Benny Carter’s Bijou. The fifth movement starts with a fugue (homage to Gunther Schuller and George Russell) with a nod to Charlie Mingus’s Goodbye Pork Pie Hat and then to Miles Davis, ending with reflective solo piano. The finale is contemporary but looks back to the spiritual as Marsalis references Duke Ellington’s Black, Brown and Beige and skilfully moves from an African six beats to a religious six beats, the musical tension lessening and, solo goodbyes finished, Swing Symphony ends, quite literally, with a collective sigh.

I guess the audience was split roughly equally – regular LSO concertgoers and jazzers (including Ken Clarke and Rowan Atkinson) – the latter following jazz convention by clapping the solos of the Lincoln Center Orchestra but only applauding one orchestral spot (a timpani riff), which might explain the applause between the movements of Rachmaninov’s Symphonic Dances.

With the Lincoln Center Orchestra placed in three rows in front of Rattle, and the orchestral strings moved to the side, I thought the balance would not work, but it settled down quickly and the LSO played its socks off. Marsalis gives a symphony orchestra plenty to do, with Nelson Riddle-like swooping strings and a generous number of solos. There were times when virtuosic trumpet or trombone strains seemed to be coming from Marsalis’s finest, that I realised that it was the LSO providing the sounds! After Swing Symphony Lincoln Center Orchestra offered a subtle encore topped and tailed by Marsalis.

Expert solo work from the LSO also typified Rachmaninov’s Symphonic Dances – the central section of the opening movement was exquisitely dovetailed in the wind section – and Rattle teased out detail and colour at every turn. He may, inauthentically, have allowed the gong to die away at the end, but it was worth it for the collective holding of breath before the applause.