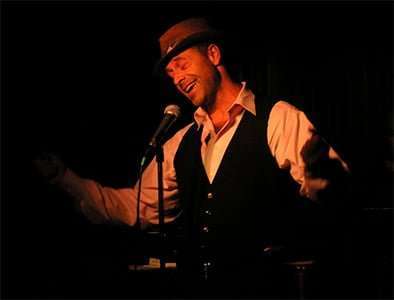 With Jean Brassard oozing Gallic charm as he weaves his way through twenty or so chansons from the repertoire of the late actor and singer Yves Montand, the elegant Crazy Coqs cabaret room takes on the atmosphere of an inviting Left Bank café. The personable young man has a lyrical and virile singing voice in the best French tradition, smoothly melodic while alternately playful and seductive. The songs are mostly in French, but they are linked by an appealing English narration which relates them to the life and career of Montand. One of Brassard’s first numbers is the popular ‘Sous le ciel de Paris’, which he concludes with “Sous le ciel de… Marseilles” – Montand was raised there by his poverty-stricken parents following the rise of fascism in his native Italy. (His father was a staunch Communist.) In Marseilles Montand’s fantasies involved Fred Astaire musicals, and cowboy films, influences that are evoked as Brassard struts fluidly through ‘Dans les plaines du Far West’, his stance enhanced by donning a Stetson. (Hats become an important part of his act, as they were for Montand.)

Montand gained his experience performing in music-halls, but his career ignited after he met Edith Piaf in Paris. She became his lover and mentor. Brassard tells us that Montand inspired Piaf to write the lyrics for her trademark ‘La vie en rose’. However, Piaf shrewdly concluded that should both of them appear in the same venues they would “cancel each other out”. Early numbers in Montand’s repertoire included ‘La chansonette’, ‘La bicyclette’, ‘Mon manège à moi’ (You make my head spin) and ‘Ce monsieur-là’ (This gentleman). For the evocative ‘Syracuse’, Brassard picks up a harmonica with which he lovingly enhances the Parisian mood, following it with ‘Le gamin de Paris’ (The kid from Paris).

Other songs include ‘Grand boulevards’ and ‘Les cireurs de souliers de Broadway’ (The shoeshine boys of Broadway). They punctuate stories of Montand’s enduring marriage to actress Simone Signoret (despite his philandering) and the couple’s blacklisting due to their involvement in left-wing politics: the couple was instrumental in translating Arthur Miller’s allegorical play The Crucible, reflecting McCarthyism, for the Paris stage. Later, when Montand was in Hollywood filming Let’s Make Love, he had an affair with Miller’s wife, Marilyn Monroe. From that film, the only American song Brassard includes is James Van Heusen and Sammy Cahn’s ballad ‘Incurably romantic’.

In a touching reminiscence from his childhood, Brassard – born in Quebec – recalls his father, on accordion, playing the plaintive ‘Roses of Picardy’. Brassard becomes his father, slowly waltzing around the dining room holding his mother at some length away (“She was a large woman”). In contrast he sets feet tapping with a bouncy ‘C’est si bon’.

The song probably most associated with Montand is ‘Les feuilles mortes’, most often heard with Johnny Mercer’s English lyrics as ‘Autumn leaves’. The words tell of loneliness and love lost, but this is an evening that celebrates the most romantic language in the world, so how perfect that Brassard shares with us a set of lyrics written by his own romantic partner, co-writer and director David Krueger, and which tell of love fulfilled and love enduring. C’est magnifique! Throughout, Leigh Thompson, Ed Morris and Dominick Hahn offer perfect backing.