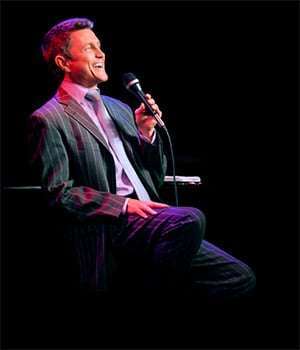 This intriguingly named programme is subtitled “Lighter Fare for a Winter Night”. Although there are a few passionate ballads the emphasis is on comedy, with some splendidly humorous, in some cases neglected songs and some witty banter regarding the material and the singer’s youth and background. Jeff Harnar has long been one of cabaret’s finest purveyors of sophisticated material, admitting to a particular affection for the songs of Cole Porter. He has delighted London audiences before, but this is his first time at The Crazy Coqs. He had captivated this audience by the end of his first number. And what a number! Harnar has taken Porter’s joyous invitation to revelries, ‘I’m throwing a ball tonight’, a typical name-dropping feast, and added his own lyrics, a dazzling feat that brings the song up to date. I do hope that he records the number.

Another Porter delight is a medley that perfectly blends Harnar’s smooth baritone with the melodic tenor of his accompanist, the multi-talented Nathan Martin. Starting with the hymn to self-composure, ‘Well, did you evah?’, the pair runs seamlessly through six Porter classics, including ‘Cherry pies ought to be you’ and ‘Let’s be buddies’. Harnar resurrects a Porter novelty when he sings Jimmy Durante’s showstopper from Red, Hot and Blue (1936) – ‘A little skipper from heaven above’. Recorded by Ronny Graham on an album of Porter rarities around fifty years ago, it probably hasn’t been heard since. Harnar reminds us that Red, Hot and Blue was the show that promoted a famous clash when Durante and Ethel Merman both demanded top billing. Merman asked Durante if he had ever heard the expression “Ladies First”, to which Durante pointed out that it is always “Mr and Mrs”. The resolution found their names crisscrossed.

Between songs Harnar shares potent memories of his childhood, his musical influences and his first encounters with New York, with which he’s had a lifelong love-affair. During his first club engagement in the city he would sing Kander & Ebb’s ‘New York, New York’ at least seven times a night; this cues another grand pastiche, poking affectionate fun at that insistent anthem. Harnar also displays more-dramatic fare with his impassioned version of ‘Lonely town’ (from On the Town) and Jule Styne & Sammy Cahn’s rueful ‘I fall in love too easily’. But the evening is primarily lighthearted, with such comic gems as an extract from Comden & Green’s ‘Readers’ Digest’ sketch, which gives us the plot of Les Misérables in three sentences. Harnar bravely (and successfully) negotiates Tom Lehrer’s breakneck patter version of ‘The Elements’ (to the music of Arthur Sullivan) and brings lilting conviction to Noël Coward’s bracing ode to escapism, ’Sail away’.

Delving back to his childhood (with the neat touch of showing us LP covers from the 1960s), Harnar evokes a whole era with an inspired selection. One of the funniest (and wickedest) numbers is an imagined version of Oklahoma! as conceived by Sondheim. Entitled ‘Sunday in the Meadow with Curly’ it has merciless fun with the composer’s musical mannerisms and intricate rhymes, including rapid trills during a solo for the town nymphomaniac as she laments, “I’m really very sorry but I can’t say no”. Written by Rick Crom, it is a delicious item that reminds of the great days of revue, as does Harnar’s show, which ends appropriately with Cole Porter’s ‘Can can’ and one of his most brilliant lyrics, delivered in great style by the “elegant, swellegant” Mr Harnar.