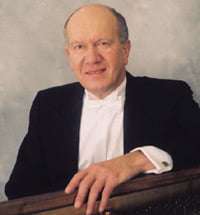 John Lill is tall and imposing. He has a genial manner, a solid presence and a formidable technique. In his pre-concert interview with Sophie Prett, the Chairman and Artistic Director of the Hendon Music Society, he was relaxed and assured, comfortable with himself, speaking with disarming modesty.

John Lill seems most at home when playing the piano robustly and forcefully, in a great swell of vigorous sound. There is something sturdy and massive about his performances. They are direct and uncompromising, resolute and totally honest. The Beethoven sonata began formidably – rather sternly, too. I heard less of high spirits and good humour, or buoyancy. The slow movement was monumental – a magnificent and impressive pronouncement that probably had no precedent among piano sonatas at the time of writing. In mood, it owed more to the vocal sonority of a Bach chorale than to the hammers on a pianoforte. The subsequent two movements had a welcome levity and some sparkle.

The Brahms was also magisterial. The Variations proceeded at a potent pace; most were resounding; many were well differentiated, conscientiously observing the markings, ‘dolce’, ‘animato’, ‘con vivacita’. ‘Risoluto’ was responded to with particular enthusiasm. The final Fugue impressed, grandly. My overall impression of the performance, however, was of relenting loudness, which, ill-advisedly, did duty for spontaneous thrust, surge and vitality.

The programme continued with two well-contrasted expressions from Chopin, both played firmly and dispassionately, with serious respect for their inherent musicality. The Nocturne held a grave, lyrical beauty whose soft sounds resonated in the night, in great dignity. The Polonaise tended towards being swaggering and brash – a braggadocio of a piece. Yet, Lill’s playing was not no-holds-barred. That is not his way.

Prokofiev wrote his Seventh Piano Sonata in 1942, while engaged on his opera “War and Peace”. The Germans were in Stalingrad, and Prokofiev, as an important Soviet artist, had been ‘exiled’ for his own safety to Georgia. He acknowledged the public implications of his opera (Russian resistance to a foreign invader), but made no such claims for the piano sonata. The fact that much of the writing is energetic, percussive, soaringly lyrical, abrasive and, even, vicious merely affirms its origin. These are hallmarks of Prokofiev’s musical style, not merely in 1942, but through most of his life.

Lill’s performance was stalwart. There was an abrasive, turbulent rotundity to the first movement, a restrained and fervent lyricism to the central Andante and an astonishing, relentless attack in the spiked, rasping finale toccata. This was thrilling and exciting, frightening, too – the showpiece of the evening. Lill was in his element. Many among the audience in this modern-style church stood, giving Lill resounding acclaim.