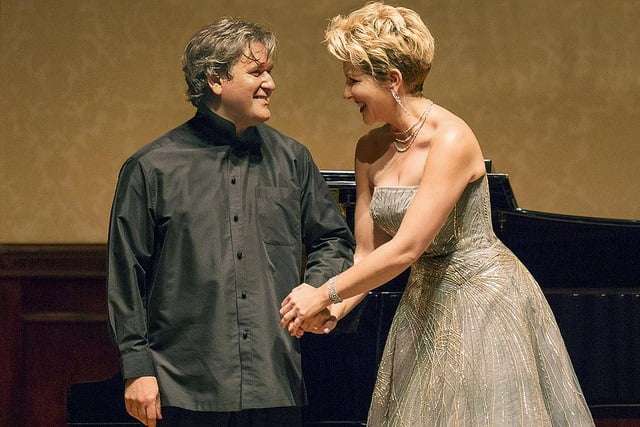 Recitals with opera singers and a piano used to be a regular feature of Royal Opera House programming until the mid-1990s and it is welcome to see them making a return. Often these ‘grander’ voices if heard in more intimate spaces cannot scale down their magnitude in recital venues – Joyce DiDonato is a notable exception – but can still bring a sense of the intimate to a cavernous space. At the Royal Opera House the black stage tabs and spot-lit centrally-placed piano and performing area brought a sense of the salon remarkably.

Joyce DiDonato and Antonio Pappano, vivid communicators both, have a great and intuitive rapport and an unerring ability to bring audiences to them. Surtitles were used for all the items bar the selection of American numbers. This aided understanding of the intricacies of the Italian, Spanish and French texts, though DiDonato has that ability to get to the heart of a song’s mood and location through her vivid tonal colouring as well as her bodily movement. Pappano is also a super pianist – only the late Wolfgang Sawallisch comes to mind as an opera conductor who was also a notable song-accompanist.

We started off on Naxos with Arianna slowly realising that she has been deserted by the faithless Theseus and her reactions to that encompassing her sense of bewilderment, desertion, anger, her all-consuming remaining love for him, and her anticipation of death. The two recitatives and following arias by Haydn were here fused to make this one intense scena, characterised by vivid articulation and some memorable displays of vocal technique as well as haunting sung. The coloratura conclusion to the second aria was notable for its intrinsic drama. Pappano made much of the accompaniment.

Spanish songs followed, all utterances on the universal joys and pains of love and romance, yet the unmistakeable atmosphere was Iberian, hot and sultry, DiDonato bringing expressive feeling and a sense of the improvisatory to the trills and turns aided and abetted by Pappano’s rhythmically sprung playing. In the Granados particularly the singer’s skills at traversing the treacherous intervals across all registers with great mastery was particularly evident.

After the interval we were in more impressionistic territory with Shéhérazade. All the exoticism of Ravel’s writing (more frequently heard in its orchestral form) was there in Pappano’s superb playing whilst DiDonato spun the narrator’s tales with point and subtle colouring. Switching to selections from American musicals brought their concert to a great conclusion, songs not without their vocal challenges. Amplification not needed, every word was audible, there was a delightful and infectious comedic interaction between singer and pianist, and the charm of the songs emerged strongly.

There were three encores, two with a Spanish feel and finally a brilliant performance of Irving Berlin’s ‘I love a piano’ in which Pappano’s bravura contribution – bringing in snippets from the entire programme – brought the house down. As applause rang out Pappano also presented DiDonato with her Laurence Olivier Award, shared with Daniela Barcellona for Semiramide.