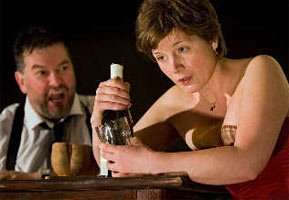 A new opera is always a perplexing prospect, sadly approached with trepidation. With so many operas in the standard repertoire new works find it very hard to edge their way to a performance, unless there is the backing of a major house. Usually, new operas tend to cater for various types of audiences without being wholly satisfying to any.

Philippe Boesmans’s “Julie” is a triumph of music, staging, singing and drama. The Julie of the action, from Strindberg’s “Miss Julie”, is the daughter of a well-to-do family. She allows herself to be seduced by Jean, a manservant who is (almost) engaged to Christine, a maid. Jean, through his own scheming and violent demeanour, drives Julie to suicide at the end of the opera because, whilst encouraging their forbidden relationship, he purposefully breaks it up. What is not answered is his motivation for this course of action. It could either be misogynistic (but then would he not want to marry Christine?) or sadistic. He does have a violent streak, and this is demonstrated to an extreme extent when he decapitates Julie’s budgerigar with a bread knife. Some in the audience gasped, unsurprisingly, given that the tension had been ratcheted to an unbearable level. It is not too far removed to compare this work with Büchner’s play “Woyzeck” (as in Berg’s opera “Wozzeck”) as the underlying idea of nasty psychological torture pervades both works. Boesmans’s music has parallels with Berg’s. 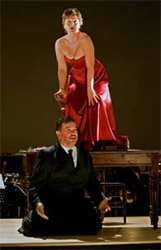 Arlene Rolph presented Julie, at least on the surface, as a strong character, but her descent into longing for a life with Jean, with the obvious tragedy, was just beneath the surface of her characterisation, and effective for it. She runs the gamut of emotions from joy-with-life through to utter despair. Jean’s dreams of achieving more than his current station in life give his character some sympathy, but by the end it is the hapless Christine, who simply wants to live her life in a good way without complications, who is the victim of the drama.

All three singers’ diction was spot-on so that the libretto could be followed without trouble. Christine has many shrieks of anguish whereas Jean’s part calls for many speech-like characteristics. The moment when Jean’s infidelity is discovered by Christine elicited great sympathy and when Jean hands over the cut-throat razor to Julie it was obviously cowardly on Jean’s part that he should not take his own life.

The original staging of the work involved full orchestra. The paring down to a chamber ensemble brings intimacy to the drama, ideal for the Linbury Theatre. This combination might allow the sobriquet of ‘Kitchen Sink Opera’ to be attached. A lot of the orchestration seems ironic, with moments of pathos having a comical edge in the scoring. In contrast, the nervous moments, such as Christine’s conversations with Julie and Jean, were untroubled, which gives the drama an effective schizophrenic feel.

The instrumentalists were situated behind the set, which had no back-cloth. The set itself consisted of a servant’s kitchen, a table to one side with stacks of crockery and a door with a telephone on the opposite wall. Effective lighting altered the mood quite radically, from very bright to a powerful scene when the back lights were so strong as to put Jean and Julie in perfect silhouette whilst making love on the kitchen table.

Boesmans is better known in Europe. On the evidence of “Julie” he deserves greater exposure. “Julie” is not to be missed, and is short enough to make an ideal double-bill with Bartók’s “Duke Bluebeard’s Castle”.