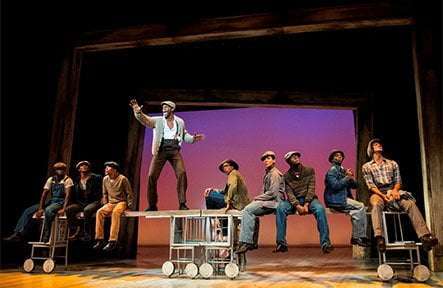 The case of the Scottsboro Boys was a notorious and shameful episode in American legal history. In 1931 nine black youths were accused of rape in Alabama. They had hopped on a train and were reported to the local sheriff by some white youths who claimed they had been attacked. When two white girls claimed they had been raped, the authorities stopped the train and arrested the nine teenagers. All but one of the boys, Roy Wright, who was thirteen, were tried and found guilty by an all-white grand jury without any real evidence. They were sentenced to death in the electric chair.

Several further trials ensued after one alleged victim admitted to giving false evidence. Various protests by national progressive organisations further delayed the death sentences. The following year saw another hold-up as the boys had not been offered any counsel. A New York lawyer, Samuel Leibowitz, was appointed for the boys in early 1933. One of the two girls, Ruby Gates, denied being raped and yet Haywood Patterson, one of the defendants, was found guilty of rape. Through the following years the charges against four of the youngest boys were dropped, with three more of the boys paroled in 1943 and 1946. In 1948 Patterson escaped from prison and then wrote his autobiography which was published in 1950. He was then re-arrested after a fight, tried three times and found guilty of manslaughter. Two years later he died of cancer. It was not until 1976 that Clarence Norris, the last of the boys in jail, was declared not guilty. He published his autobiography in 1979 and died ten years later. In 2004 the town of Scottsboro commemorated the ruined lives of the nine boys at Jackson County Courthouse and a museum in their memory was created in 2010. Earlier this year, eight decades on, all the boys were finally exonerated. 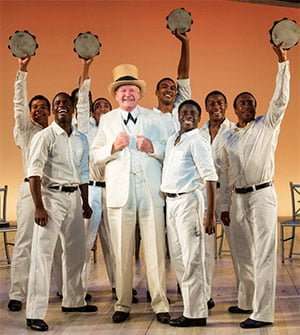 It is a heartbreaking story that is told in John Kander and Fred Ebb’s musical The Scottsboro Boys, which opened in New York in 2010. Now in London at the Young Vic in a production by the original director and choreographer, Susan Stroman, it proves to be one of the best shows that Kander & Ebb created in their long partnership together (and shortly before Ebb’s death) – such as Zorba, The Rink, Kiss of the Spiderwoman and 70, Girls, 70.

Recalling how Kander & Ebb tackled the subject of the Nazis’ subjugation of the Jews, in Cabaret, and an equally serious theme of a murder trial in Chicago, by turning them into shows within a show, the idea for The Scottsboro Boys to be done as a minstrel performance is not surprising. Apparently Ebb said, “If you don’t make it entertaining, no one will listen.” And, despite the horrific nature of the subject The Scottsboro Boys is wildly entertaining. In making it minstrel-based, a genre that originally used white performers blacking up with a white Interlocutor and two MCs, Mr Tambo and Mr Bones, Kander & Ebb have emphasised the white racist attitude to black people so redolent in 1930s America. Even the white women are played by black performers, which is possibly a first in the history of music theatre.

From the minute the band strikes up, ‘Minstrel March’, we are back to the sound of a real Broadway musical. Last year it was the late Marvin Hamlisch who proved in Sweet Smell of Success that, yes, they still write musicals as they used to. Irony is top of the list in the brilliant Kander & Ebb songs, such as ‘Alabama ladies’, sung by the two ‘white’ women, ‘Electric chair’, ‘Make friends with the truth’, ‘That’s not the way we do things (in New York)’, ‘You can’t do me’ and Haywood Patterson’s own song ‘Nuthin’’. He continually refused to lie even when his lawyer promised he probably could get off if he pleaded guilty. Who would you trust?

Despite the gravity of the subject, the razzamatazz quality of the songs and their ironic lyrics really gives the show its boost. We are being entertained but we are also being let in on the truth behind racism in America at a time when the perceived wisdom was that exhibited by the bigoted white Interlocutor (in a splendidly brainless characterisation by Julian Glover), that if you are black, you must be guilty. Sadly, The Scottsboro Boys is a timely reminder that very little changes.

It’s hard to recall another show with so many fine performances, both moving and hilarious, as exhibited herein, because the singing, the dancing, the music and the book are all spot on. Kyle Scatliffe is a charismatic performer and he wrings your heart out as Haywood. Christian Dante White as both Charles Weems and Victoria Price (one of the alleged rape victims) is nothing if not extremely versatile. As Mr Bones and Mr Tambo, Colman Domingo and Forrest McClendon are a twosome of great vivacity and panache, doubling- and tripling-up with total aplomb. The whole company shines under Susan Stroman’s tight direction and exacting choreography to all those brilliant ragtime, cakewalk and folk tunes which Robert Scott’s band plays up to the hilt. This is one show you shouldn’t miss.