This was part of the Kirckman Society concert series that makes a speciality of presenting young artists. In fact the duo of Kaoru Yamada and Sholto Kynoch has already been featured at the Wigmore Hall. Yamada is currently studying at the Guildhall School of Music and Kynoch, a student of Malcolm Martineau and Graham Johnson, is making a successful career as an accompanist (as well as founding and directing the Oxford Lieder Festival). 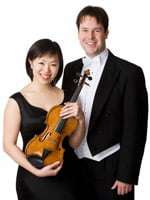 Despite the attractively varied programme this was very much a Jekyll & Hyde evening, the first half having little to commend it whereas the second was a pleasure from first note to last.

Presented with such an opportunity as a Wigmore Hall recital one would have thought that the musicians would have taken particular care to choose repertoire with which they have affinity. However, they made little of one of Mozart’s grandest sonatas with headlong tempos in the outer movements which allowed for little in the way of elegance or light and shade, and attacking the work with a beefy all-purpose vigour; even the glorious central Andante plodded, its pauses awkwardly negotiated rather than pregnant with unspoken meaning.

Dating from 1915, Szymanowski’s Nocturne and Tarantella was written around the same time as the better-known Mythes and is an early fruit of the composer’s taste for exoticism that found its ripest flowering in the opera “King Roger”. Nocturne is Spain – suggestions of guitars and passages for the piano marked quasi mandolina – whilst Tarantella is Italy. According to a friend of Szymanowski the latter was written following an evening when the composer and the violinist Pawel Kochánski “avaient fait l’honneur à une providentielle bouteille de cognac”. However, one suspects there is more subtlety to this work than we heard on this occasion – in Nocturne with its anticipation of Ravel’s Boléro one found oneself imagining what Torvill and Dean would have made of it – and Tarantella was subjected to an avalanche of sound with little variety, its 6/8 Presto appassionato too fast for rhythms to register crisply.

The recital’s second half was a very different matter; and in the Brahms these musicians proved a genuine duo, interacting and striking sparks off each other. Kynoch instinctively makes the right sound for Brahms – warm velvet – whilst Yamada finally sounded at ease, precisely locating the individual character of each movement – shadowy in the first’s development, gentle and dignified (almost Handelian) in the Adagio and playful in the intermezzo; a little more elbow room in the finale would not have come amiss but, overall, this was a wholly pleasurable experience.

So too was the contribution from the Schumanns. Clara’s Three Romances, written in 1853 for Joseph Joachim with whom Clara toured, were her final works (she gave up composing during her husband’s illness and following Robert’s death in 1856 she devoted herself to tours and teaching but composed nothing more despite living until 1896). The opening Andante whetted one’s appetite – it has a wistful, almost Elgarian quality – the central Allegretto is more recognisably Schumann-esque whilst the final movement, unusually marked Leidenschaftlich schnell (Passionately and fast) gradually becomes calmer as the movement progresses. The pieces drew highly effective performances and one can appreciate why Kynoch is increasingly sought after as an accompanist.

The encore, the second of Robert Schumann’s Romances, was written as a Christmas present for Clara – so there was an elegant logic to its inclusion in this context and at this time of year.