Stockhausen
Donnerstag aus Licht – Opera in a Greeting, three Acts and a Farewell to a libretto by the composer [sung in German, with projected English translations] 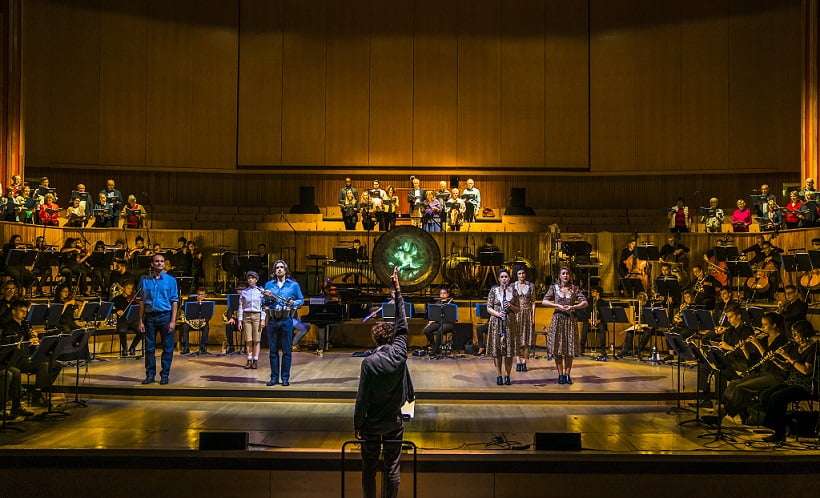 Can it really be thirty-four years since Donnerstag, the first completed drama of Stockhausen’s seven-day cycle Licht, had its UK premiere to (largely) appreciative audiences at Covent Garden? That the plan to stage the ensuing six instalments foundered thereafter was but the start of a fraught process of gestation and reception with the penultimate drama, Mittwoch, not staged until 2012 in a memorable production from Birmingham Opera Company. Reductions of two others were given at the Barbican Centre and the Royal Festival Hall in 2001 and 2008 respectively, but this was the first time in over a third of a century that London has seen one of the dramas given complete and in accordance (more or less) with the composer’s intentions. The result proved a triumph of creative pragmatism and of conveying the essence of Stockhausen’s utopian imaginings.

At around twice the length of Wagner’s Ring cycle and extending for three further evenings, Licht has been frequently – and lazily – dismissed as the outcome of the hubris that over-took Stockhausen’s thinking over the latter half of his career. In fact, the musical premise or ‘Licht-Ruf’ is a formula lasting mere seconds and transformed into respective melodies of the various protagonists. Here the three principal figures are Michael, Eve and Lucifer – each portrayed, often concurrently, by a singer, dancer and instrumentalist. Enabling the scenario to be played out over several levels offsets the need for any more complex or elaborate mise en scène, as demonstrated by the small groupings predominant in Donnerstag. Stockhausen ‘thought big’, but his realisation of such thinking is most frequently one of less being more. 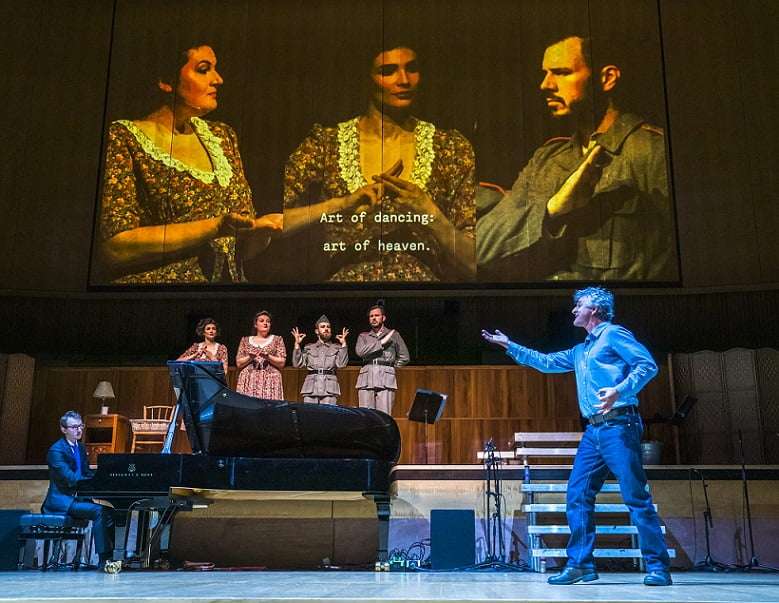 This was immediately apparent in the First Act, ‘Michaels Jugend’. Here the role of Michael was taken by the animated singer-actor Hubert Mayer, agile dancer Emmanuelle Grach and trumpeter Henri Deléger – whose stentorian playing made him the ‘hero’ in all senses. In the first scene, ‘Kindheit’, Michael’s childhood unfolds against his mother’s mental illness and his father’s mood-swings – the former embodied by Eve, taken eloquently by the singer LéaTrommenschlager, gracefully by dancer Suzanne Meyer and quixotically by basset-horn-player Iris Zerdoud; with the latter embodied by Lucifer, taken in hectoring style by singer Damien Pass, viscerally by dancer Jamil Attar and ominously by trombonist Mathieu Adam. In the second scene, ‘Mondeva’, Mayer duets sensuously with Zerdoud against the backdrop of his mother’s death in an institution and his father’s demise on the battlefield; whereas in the third, ‘Examen’, the Michael triumvirate reviews his life so far to those of Eve and Lucifer, now the jury at his exam to the conservatory – successfully enacted to the dextrous pianism of Alphonse Cemin.

There are no vocal elements in the Second Act, ‘Michaels Reise um die Erde’. Stockhausen here represents Michael’s global voyage of discovery as this takes in evocations of Cologne, New York, Japan, Bali and Central Africa; gradually re-engaging with ‘Mondeva’ as trumpet and basset horn play out a rapt duet, opened-out expressively by vicious interjections from brass and capricious commentaries from those ‘clownesque swallows’ that are clarinettist Alice Caubit and basset-horn-player Ghislain Roffatprior to a final heady ascent into the ether.

A culmination in every sense is provided by the Third Act, ‘Michaels Heimkehr’. Here the first scene, ‘Festival’, brings the largest forces – the Michael, Eve and Lucifer ‘trios’ joined by orchestral groups with choirs, on-the-stage and away from it, that provide interjections specific to the action and a more generalised (mystical?) context. The ensuing ceremony – now featuring lyric-tenor SafirB ehloul as Michael and soprano Elise Chauvin as Eve – is interrupted with the stage-crashing of an aged woman who ridicules proceedings, then more threateningly by Lucifer whose dancer and trombone guises engage in theatrical combat with the dancer and trumpet of Michael. Lucifer’s singer then berates Michael’s for having betrayed the premise of Heaven for inferior humanity, his departure duly following on from those of the choir and orchestra – leaving just the Michael trio to sing, dance and play ‘Vision’. Taking in reminiscences of all the preceding scenes, this is both an explanation of what has been witnessed and a plea to the audience as how he and Lucifer might best be comprehended. 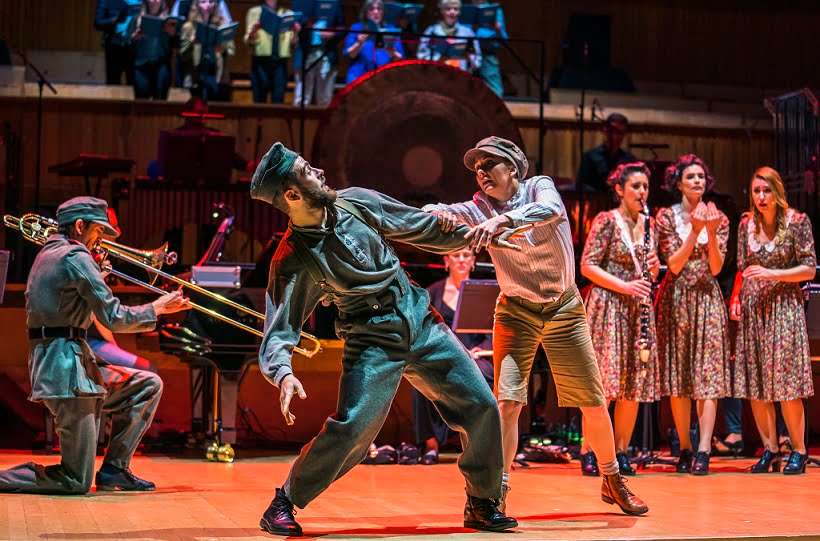 Throughout the three hours of this production, Benjamin Lazar’s stage direction conveyed the grandeur and also the intimacy of Stockhausen’s music with a resourcefulness the greater for its understatement, abetted by the fluent sound projection of Florent Derex and the ‘sculpted’ computer music design of Augustin Muller who, between them, transformed the Royal Festival Hall into an environment of potent depth and immediacy. The video designs of Yannick Chapotel subtlety pointed up the (not always) oblique autobiographical element within the stage-action, and the lighting design of Christophe Naillet came into its own with the laser-beam spectacle which enhanced the penultimate scene. Singers and players alike responded fully to Maxime Pascal, whose animated and attentive conducting kept this performance unerringly in focus.

A pity the ensemble performing ‘Donnerstags-Gruss’ in the Clore Ballroom was not greeted with silence, but there was no doubting the mesmeric impact of the five trumpeters atop and in front of the RFH in ‘Donnerstags-Abschied’. Here’s hoping for Samstag in 2020.