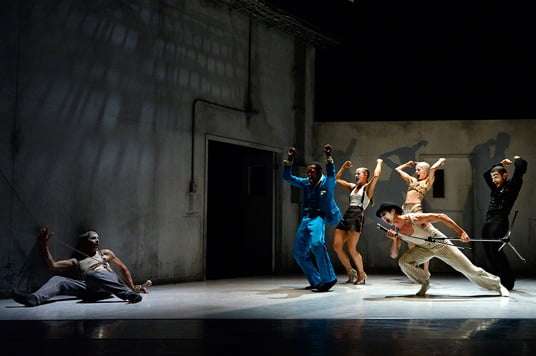 Can art ever emerge out of unspeakable horror? Should it? Or does it speak of indulgence or even prurience? Betroffenheit, a term which is pretty much untranslatable from German, but which means the emotion of being stopped dead in one’s tracks and disorientated, is the name given to the offering from choreographer Crystal Pite and the writer and actor Jonathon Young. Just as Picasso painted Guernica or Kenneth MacMillan choreographed Valley of Shadows, so these co-creators have worked to form an exploration of true horror – Young’s witnessing of the deaths of his own daughter and two cousins in a log cabin fire in 2009. Or rather a depiction of Young’s mind trying to make some sense of the unthinkable. 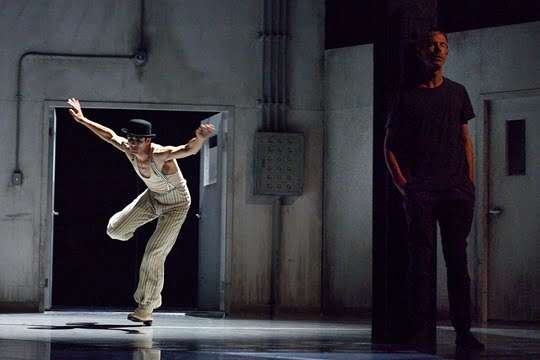 The stage becomes a representation of Young’s psyche, in the first section an eery industrial room where electrical cables slither across the floor and Young hears his own voice speaking from light fittings, desperately trying to rationalise but going over words, ideas, memories again and again. The five dancers from Pite’s Kidd Pivot ensemble manifest as grotesque burlesque characters, at times jelly-limbed puppets, at others tap dancers, insect-like creatures or grimacing clowns as Young negotiates the horrors of his own disjointed thoughts. His own descent into drug use in an attempt to distance himself from himself is unflinchingly charted, the world swirling around him in a frightening variety show.

If this all sounds too exaggerated, too indulgent, it is not, as both Young and Pite deal with the subject without sentimentality. Pite’s movement palette seems without limit as she creates a flow of absurdist sequences. Her dancers are superlative, able to move in whichever way she asks, from Latino ballroom to tap to twitching hip-hop. In what is the most frequent style, she combines often slow-moving, even static lower bodies with whiplash-fast, exaggerated upper bodies; a fascinating juxtaposition. 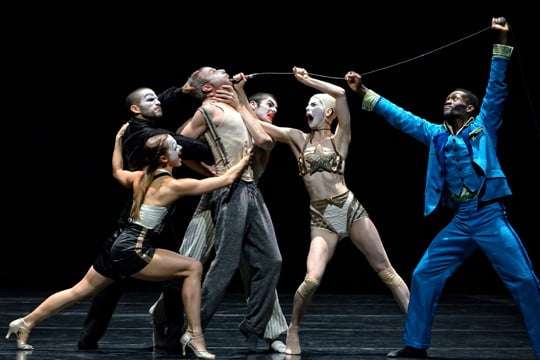 The second section is more of a pure dance piece (Young’s voice is very much to the fore in the first, both live and recorded) and the soundscape from the three composers and sound designers is accompanied by extraordinary movement as well as virtuoso lighting, at times making waves of light flow across the stage, at others using blackout and short-lived spotlights to create tableaux of memory. This section offers hope after the relentless mental chaos of the first, not of final escape from the ‘box’ of memory, guilt and horror, but of a way to cope with it, to be able to return to it without it taking control. Throughout the work Jermaine Spivey features as a form of alter ego to Young (himself an untiring and powerful stage performer); he enacts a final solo which recalls moves from early on but also explodes into seemingly impossible feats of dance. Spivey is a remarkable performer who invests himself wholly in his role, as do his four dance colleagues, superb one and all.

Betroffenheit is not an easy work. It is slightly uneven – the first section stretches to a full 70 minutes while the second comes in at 45 – but it contains such emotional truth, such choreographic invention and scenic virtuosity that it cannot fail to persuade the viewer. The horrors experienced by Young himself have indeed become a work of art, and one which overwhelms its audience.