Chorus from The Royal Central School of Speech and Drama 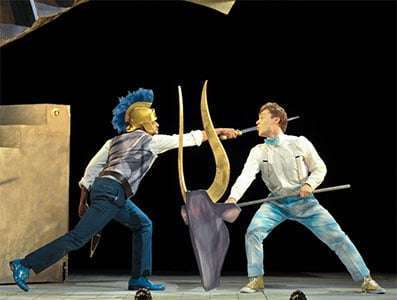 It seems an inspired stroke for the London Handel Festival to present a different operatic slant upon the legend of Ariadne in this year of Richard Strauss’s 150th-anniversary that will see at least one production of his Ariadne auf Naxos in the capital. In the meantime, with a performance of Ariodante also to follow in this Festival and ENO’s present run of Rodelinda, Handel’s adopted home is currently awash with his operas.

In Handel’s loose retelling (dating from 1733), Teseo’s battle with the Minotaur is little more than an incidental detail, subsidiary to his romantic travails with Arianna. A superb cast of young professionals featured in this production, rising to the challenge of the florid vocal writing with all the confidence and flair of any veterans of such repertoire. Soraya Mafi was a beguiling Arianna, mistaking Teseo’s intentions in risking his life to save Carilda from the Minotaur before Minos decrees that Arianna herself must be sacrificed in her place. As such, Mafi brought the passion of a lover as well as the desperation and fury of one who thinks herself betrayed, skilfully juxtaposing these in her aria ‘Sdegno, amore fanno’ at the end of Act One. Tai Oney, as Teseo, was the star of the show. Oney has the unusual distinction of sounding like a proper male soprano, roughly as the original castrato must have done, rather than merely singing in falsetto like standard countertenors. He realised the effervescent coloratura of his arias with ideal clarity, and the integration of his voice with Mafi’s in the infectiously joyful duet at the end was exquisitely beautiful. 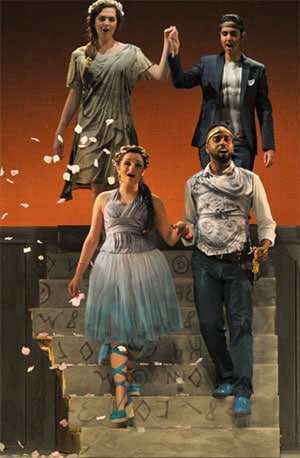 Amy Williamson and Anna Rajah were well matched too as Carilda and Alceste (the latter a male character, nothing to do with the figure of Admetus’s wife in another Classical legend). Both were sufficiently assertive in their desires and motivations, where Carilda at first is enamoured of Teseo (to Arianna’s confusion) but eventually gives in to Alceste’s advances after the latter has spirited her away to safety from the labyrinth and she realises that Teseo is devoted to Arianna alone. Tauride competes not only for Carilda’s attentions, but also to prevent Teseo from achieving the honour of vanquishing the Minotaur. Kezia Bienek’s wide vibrato sometimes obscured Tauride’s arias (comparable to Teseo’s) but it was not inappropriate as a characterisation of bluster and bragging. The designers brought further comedy to the part with Tauride’s headpiece sporting just one bull’s horn. Bradley Travis seemed more fluent and relaxed in Minos’s one aria than in his other appearances confined to recitative.

Selina Cadell’s production was kept simple with a pair of staircases used in different configurations for each Act, and a minimum of stage action to allow the arias full impact. The prevailing blue colours of the set and costumes were hypnotic. The staging draws inspiration from Greek dramatic notions of fate, and picked up the references to Cupid – embodied in this production by Elliott Ross – alongside Matthew Buswell’s Sleep, directing the affairs of mortals. During the Overture they enacted a pantomime with silhouetted cartoons. Thereafter Cupid remained a fairly constant, teasing presence, with Ross’s charming smile and goading actions provoking the characters to further thought and action when they acknowledged him. It was Ross who brandished a giant bull’s mask as the Minotaur, which Teseo manages to slay, leaving the figure of Cupid behind intact, as the real challenge he still has to contend with. Buswell’s only other appearance was brief, but in vouchsafing to Teseo a dream of future victory, he was musically commanding.

In the pit, Laurence Cumming’s direction was unfailingly enthusiastic, occasionally allowing instruments to come to the fore somewhat at the expense of the singers, particularly during quieter, more reflective numbers. Otherwise, music and drama cohered excellently and all lovers of Baroque opera should see this Handelian rarity.