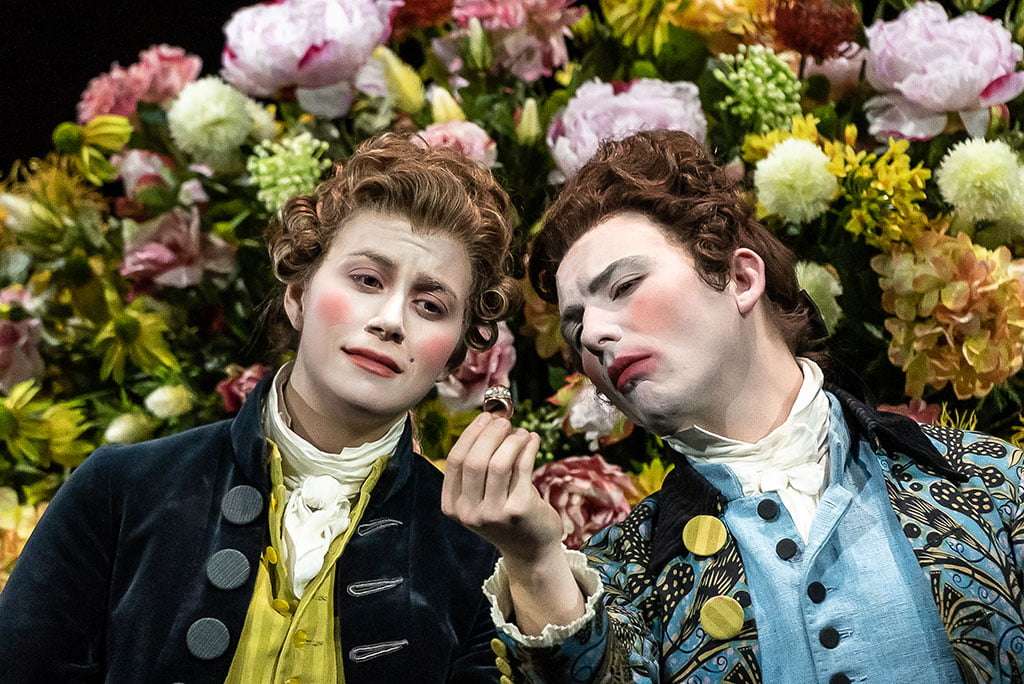 Like the recent film about Queen Anne, The Favourite, Adele Thomas’s new production of Berenice (1737) for the London Handel Festival in conjunction with The Royal Opera engages with the eighteenth-century not so much to explore it sympathetically and to understand it, but to ironise, satirise, and exaggerate it.

The frequently over-wrought gestures of the cast – as they pout, and noisily tramp, mince, or flounce around the stage – do nothing to illuminate the complex twists and turns of the contorted love interests of Berenice and her sister Selene (the Egyptian Queen and her sister in the original scenario, caught up in a power struggle with Rome). The constant mock violence becomes tiresome, and with all the action taking place around a long, garish semi-circular sofa, starkly placed on the bare open stage of the Linbury Theatre (with all three sides exposed) the production is a write-off insofar as it purports to be a realisation of Handel’s late opera seria.

Selma Dimitrijevic’s translation into English is nothing like as crass or ineffectual, preserving something more of the syntax and vocabulary of the eighteenth-century. A few pointed references to ‘politics’ might have set one edge, fearful of any oblique commentary on Brexit, but fortunately we are spared that.

Laurence Cummings directs a lively account of the score, though such as to become hard-driven and wearing as there is scarcely space for the music to breathe between the recitatives and the arias. The latter are surprisingly unvaried in tempo and texture (admittedly Handel only calls for oboes, strings, and continuo) with the result that the interpretation is not much more nuanced than the drama as presented by Thomas. 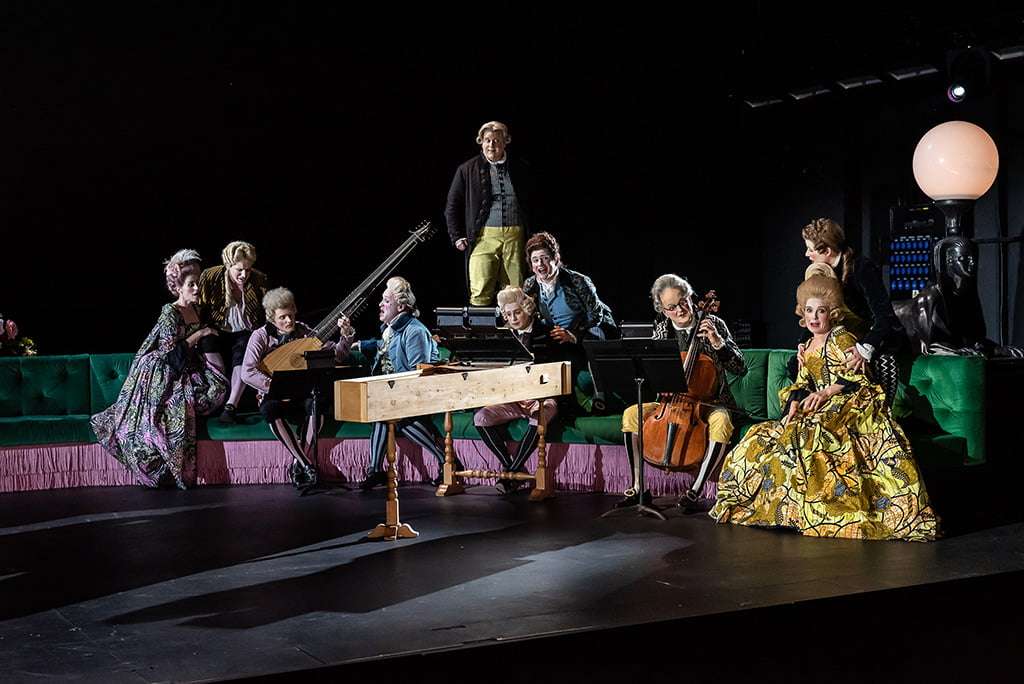 It is left to the vocalist to bring out a wider, and more effective, range of characterisation, which they generally achieve with distinction. Claire Booth and Rachael Lloyd project with forceful flair their passion for the same man, Demetrio, which leads to the personal and political tensions at the centre of this drama, complicated by the fact that Demetrio desires Selene and to install her on the throne in place of Berenice. Heavy vibrato on Booth’s part requires us to attend carefully to her words as there are no surtitles, but between them the two sopranos successfully attain the extrovert Baroque temperament of such an opera that exploited the real-life ambitions and rivalries of the divas for whom Handel wrote (a theme being taken up by this year’s Festival).

Jacquelyn Stucker cultivates a rightly more dignified and commanding demeanour in the trouser-role of Alessandro, who eventually wins Berenice’s affections on account of his noble forbearance and virtue, completing a trio of distinguished performances from the female singers here, and vindicating Handel’s reputation in those other two roles, at least, for his astute depiction of women in operas such as this, Alcina, Partenope, and Rodelinda.

The male singers are more than serviceable, if lacking the same degree of personality as their female counterparts. James Laing’s Demetrio is musically sound and committed, if a little stiff in movement. The Roman envoy Fabio, Berenice’s adviser Aristobolo, and Prince Arsace (a suitor to Selene) are generally depicted as comic characters in this production, bordering on parody, which seems to account for the musically somewhat effusive performances on the part of William Berger and Patrick Terry. Alessandro Fisher is more diffuse in tone, though certainly a characterful actor.

Were this a concert performance, it would more than pass muster. But as a staging, Handel deserves far better, especially in a rarely produced opera which is unlikely to be mounted again soon and requires more-sensitive and -imaginative advocacy.