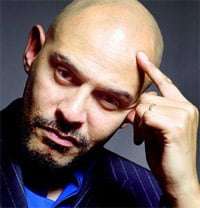 As artist-in-residence for the Southbank Centre’s contribution to this year’s London Jazz Festival, Barry Adamson might not have been an obvious choice, but the breadth of his sympathies as musician and composer make him a highly appropriate one.

Many people will know Adamson’s work, without necessarily knowing of the figure behind the music. Bassist in Howard Devoto’s seminal post-punk band Magazine, then in Midge Ure’s ‘prog-romantic’ outfit Visage and with Nick Cave and the Bad Seeds, he has also won plaudits for soundtracks to such films as “Lost Highway” and “Natural Born Killers” – scores whose heavily suspenseful atmosphere is equally evident in his solo albums from “Moss Side Story” onwards.

It was his latest solo album – to be released next February and (seemingly) as yet untitled – that was the basis for this set. As with others from his generation, Adamson has only latterly made the transition to front-man – his suave and animated vocal delivery as distinctive as the lounge-lizard demeanour, laced with a knowing humour, of his stage presence. Together with a crack ensemble, he breezed through the ten tracks of what will be a short but keenly focussed and immediately enjoyable album – including such tracks as ‘Straight ’till Sunrise’, ‘Walk on Fire’ and ‘Beautiful Side of Town’. Like his contemporary from across the Pennines, Richard Hawley, Adamson has a knack of delivering his barbs sugar-coated – but with an appreciably wider range of references from Rock and Roll to Soul and most types of ‘pop’ in between.

You could happily sing or even dance along with most of these numbers – not least the slinky jive of ‘Back to the Cat’ or space-funk instrumental in which Adamson left his band to its devilish devices. Nor should their performing from cue sheets be taken to imply that the songs were still at a formative stage: these are arrangements no less complex or intricate than those Adamson pursues on his soundtracks. In terms of intelligent pop, his previous albums can easily rank with the best that the UK has to offer, and this newcomer seems like being no exception.

After a brief pause, Adamson returned for a short but well-chosen selection from his back catalogue – including the darkly humorous ‘My Friend the Fly’, the sultry ‘I Love Paris’ and the insinuating ‘Jazz Devil’ that has become a virtual trademark. His apology for switching between front-of-stage and a laptop at the rear was hardly necessary: backing tracks so densely atmospheric cannot be easy to synchronise within a live context, and Adamson brought off the balancing-act with no mean aplomb.

Support was provided by Matana Roberts – a saxophonist well able to cover all the necessary bases, not least when joined by a trio who tracked her every move with a relaxed intensity that is the basis of ensemble jazz. Look out for her “Chicago Project” album, for imminent release on Adamson’s Central Control label. Whether as a composer, musician or promoter – he is definitely one of the good guys.