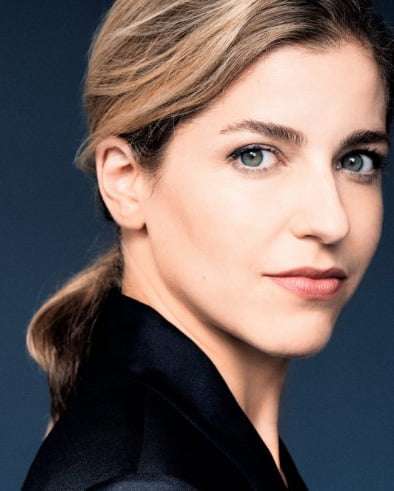 Karina Canellakis has experience and background: spotted by Simon Rattle when she was with the Berlin Philharmonic Orchester-Akademie, she studied conducting at the Juilliard School, mentored by Alan Gilbert and Fabio Luisi, and won the Georg Solti Conducting Award in 2016. Cutting a quietly authoritative figure at the service of the composer, not given to excess or flamboyance, happy to have the score before her, her beat is clear and she has a rhythmically tight wrist. Not shy of big gestures to carry a dramatic point, she’s very much a conductor who uses expressive, near-balletic body language to paragraph and phrase. Her rapport with the London Philharmonic was easy going and evident, the players visibly enjoyed making music with her, appreciated by a vocally supportive audience. One hopes she’ll be back soon.

The opening of Pohjola’s Daughter, “maiden of the north country”, premiered in St Petersburg in 1906, a piece that still assails the senses for its impact and imagination, caught a perfect soundworld, the wonderful blend of whispered bassoons, horn, and muted cello harmonies, the unmuted solo cello (magically floated by Pei-Jee Ng), opening the door on cold lands more classically viewed than fancifully fictioned.

Canellakis’s recent pulse-driven Beethoven outings (the Symphonies, a thrilling Coriolan at the Proms in July) have been distinctive for their honesty, their etched, near black-and-white, layering, their implicit trust in the ‘rightness’ of the page. Her Bartók Concerto for Orchestra was refreshing and direct, the emphasis less on amplitude and gloss than preciseness of invention. Here was a virtuoso account strong on structure, tension, integration, refinement and nuance. She linked and threaded the music’s songs and dances, its cameos and episodic construction, into a cohesive whole, the tempo rubato artistically elegant, sensitive to middle-European/Balkan agogics. Especially striking, and effective, was her ability to phrase off endings in time, not a hint of anticipation anywhere: speech one moment, silence the next. The great moments came off magnificently (brilliantly so in the Finale, a cantering ride), the LPO glowing more than garish. The colour and atmosphere of the fourth movement, with its twists of Alföld and Appalachia, puszta before picture, moving on rather than dwelling, brought other dimensions into play. The unforced ‘Giuoco delle coppie’ was stylishly scherzando, the apparent loudness of the opening side drum, without snares, reminding us pertinently that the part is marked mezzo forte with accents.

Dvořák’s problematic 1876 Piano Concerto fared less persuasively, the orchestra (violas and double basses right of rostrum) sounding uncomfortable, lacklustre violins not helping the cause. With some untidy ensemble, loose joins and uneasy tempo shifts, another rehearsal, one suspects, might have helped. Favouring an undistinguished Yamaha, Pierre-Laurent Aimard, who some years ago recorded the work with Harnoncourt, wasn’t in the best of form. Back in the days of Kondrashin and Carlos Kleiber, Sviatoslav Richter made a legendary case for the original version of Dvořák’s solo text. So, eventually, did Rudolf Firkušný. Aimard’s heavy-weather take, copy on the stand, unexpectedly made one wish for the old Vilém Kurz revision that used to be the norm.