“Isle of Noises” was the banner under which this concert launched the LPO’s 2019-20 season though ‘Jurowski’s greatest hits’ might have done just as well. While nothing was new, perhaps it was as well to be reminded of the conductor’s broad strengths and sympathies as his tenure reaches the long goodbye stage. 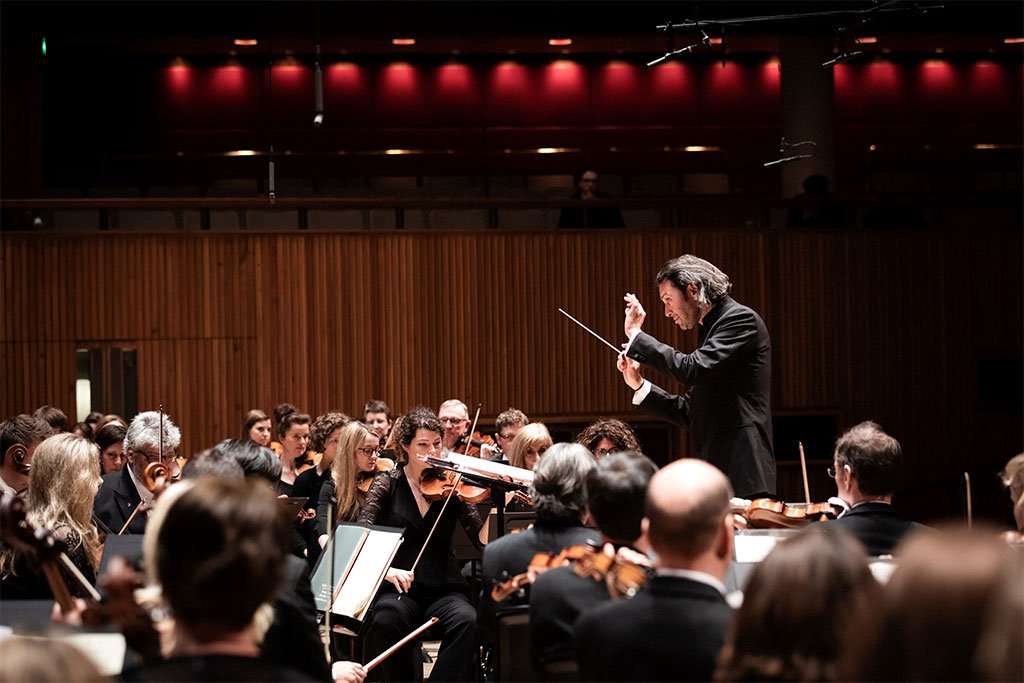 Vladimir Jurowski’s advocacy of Russian music is well-known but he has probably accompanied more top-flight renditions of Britten’s once unfairly neglected Violin Concerto than any comparable maestro; and not merely on these shores.

Oliver Knussen’s five exquisite Scriabin realisations (of piano miniatures), which the team last programmed at the RFH in 2015, do not necessarily work best as a concert opener. Their delicate textures – the scoring is for five woodwinds, two horns, celesta and a relatively small string group – were obscured at times by the throat-clearance brigade, out in force in a gratifyingly full house. Plainly fascinated by Scriabin’s alternative (non-Schoenbergian) line of harmonic adventurism and offering the merest hint of the high frequency skirling of his own music, Knussen’s treatments were well served here.

Performing in an off-the-shoulder shimmering number of dark Brunswick green, Julia Fischer took a while to warm up. Not perhaps the most apposite phrase as she displayed from the outset a seemingly effortless technical ease (intonation immaculate) allied to a comfortable immobility on the platform.

Her slightly brisk tempo for the first movement may or may not have been chosen to fit the size of her sound and relatively circumspect interpretative manner but there was no-doubting the superb precision, the LPO equally alert in support. The performance took fire midway through the second movement, and the coughing stopped during the extended cadenza. It’s a moot point whether music Britten completed during his North American sojourn fulfils this series’ brief of landmark classics inspired by the British Isles. No matter. Its communicative intensity certainly came across. For an encore, Fischer played the ‘Sarabande’ from Bach’s D-minor Partita.

Two mobile-phone rings delayed the start of the Tchaikovsky. The LPO’s seating had been rearranged with the violas and cellos placed centrally and antiphonal violins now in place. The basses were on the right. If the aim was to add a warmer, deeper core to the sound while doing justice to Tchaikovsky’s idiosyncratic violin displacements in the Finale, the effect was still over-bright and sometimes over-loud. No doubt the RFH played a part in curtailing the dynamic range, yet there were too few real pianissimos. Also eschewed was no-holds-barred near-hysteria, unless you count the deliberately edgy, wrenching effect of bow on string at the climax of the first movement.

Jurowski’s dry-eyed interpretation has not changed much in ten years. He takes an anti-histrionic essentially architectural view, the latter not necessarily assisted by the long gaps between the movements. There was extended clapping after the third. The playing as such was extremely fine if lacking that elusive combination of intense discipline and emotional excess associated with, say, Mravinsky’s Leningrad Philharmonic. There are other, perfectly legitimate, priorities.