Schoenberg
Erwartung, Op.2/1 [arr. Laura Stephenson & Staffan Lundberg]
Erwartung, Op.17 – Monodrama in one Act to a libretto adapted by the composer from a text by Marie Pappenheim [both sung in German, with English supertitles]
Bartók
A Kékszakállú herceg vára/Duke Bluebeard’s Castle – Opera in one Act to a libretto by Béla Balázs [edition by Peter Bartók; sung in Hungarian, with English supertitles]

Jaap van Zweden, in his second year as Music Director of the New York Philharmonic, continues to present fascinating programs. With three superb singers in productions by Bengt Gomér, contemporaneously composed operas by Arnold Schoenberg and Béla Bartók were coupled. 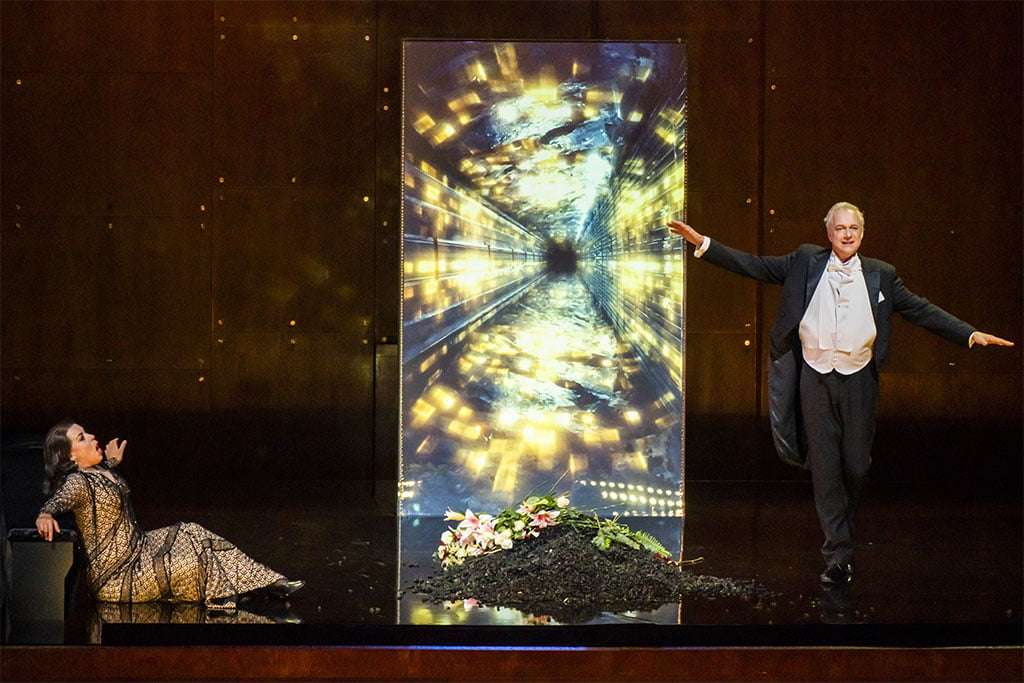 Gomér sets the action on a large raised stage behind the orchestra, with a screen for video projections. As the audience enters, seven men are seated silently in front of double doors projected on the screen on two facing benches. Between them is a table with an object – perhaps a corpse – draped in a white sheet. Before the music begins, the men rise and partially lift the sheet allowing access to what lies beneath – a pantomime that lasts several minutes and has the appearance of an autopsy, culminating in a flash photograph being taken and the sheet replaced. As the men leave, some removing white over-garments, Nina Stemme, bearing a large bouquet, enters, and, accompanied by harpist Nancy Allen, sings Schoenberg’s Erwartung (Expectation) song. Johannes Martin Kränzle stands silently on the upper stage, representing the man referred to in the song. Stemme and Kränzle exit and Katarina Karnéus enters as a long corridor beyond the double doors is depicted on the screen, and the orchestra begins to play the Monodrama.

Erwartung is a psychological portrait, its non-linear stream-of-consciousness monologue frequently altering tempos as the protagonist’s varying emotions are reflected in a wide variety of orchestral timbres. Schoenberg’s challenging score requires precise coordination, here achieved superbly. Karnéus sings with beauty and accuracy, never flagging throughout the half-hour soliloquy representing The Woman’s shifting moods, illustrated at times by changes in lighting. Van Zweden proves a perfect partner for the singer and brings out the subtleties of this evocative music. As the piece nears its conclusion a deer with prominent antlers is depicted and the men return to the table and remove the sheet, revealing the carcass of an antlered beast. One man attends to The Woman, who is slumped against a bench, giving her a gold-colored megaphone before blackout. 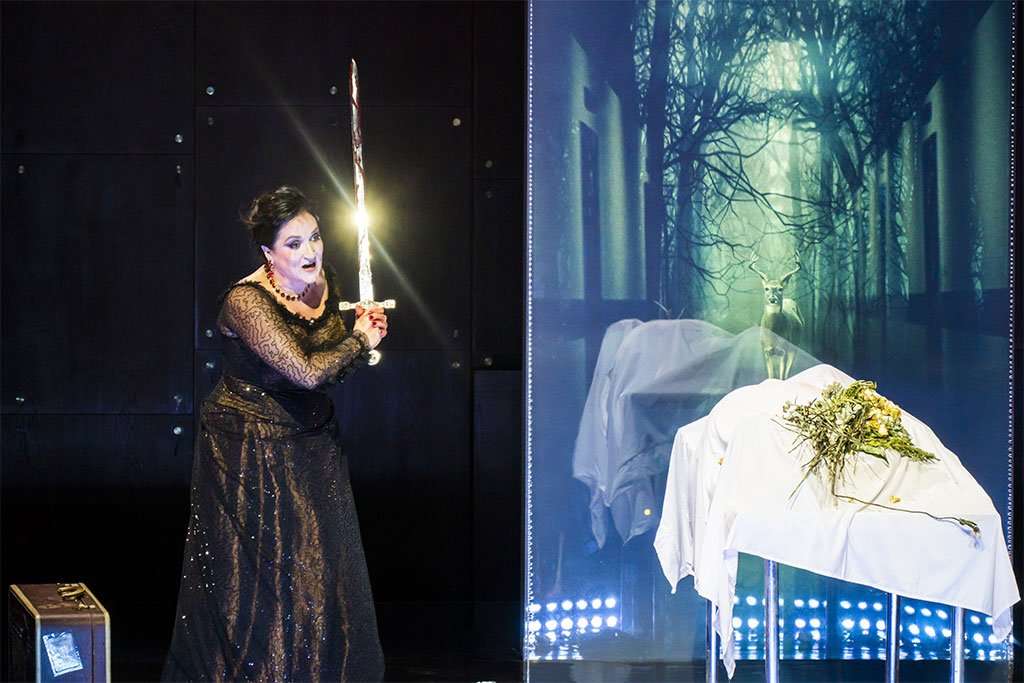 During intermission, seven women in diaphanous red dresses enter. When the concert resumes, Karnéus uses the megaphone to speak the Prologue to Bluebeard’s Castle. “The curtain of our eyelids is raised. Where is the stage, outside or within?” – suggesting that the opera is not a story of murder, but, according to Bartók’s son, Peter, an “ancient fable we are directed to apply … to our own lives.” As Karnéus’s recitation concludes the music starts, and Stemme, still bearing her bouquet, follows Kränzle.

Van Zweden’s marvelous evocation of Bartók’s rich palette of colors and rhythms is breathtaking, and the protagonists sing superbly. Stemme’s Judith is single-mindedly intent on seeing what is behind the castle’s seven locked doors, allowing herself to be diverted only momentarily by the Duke’s attempts to change the subject. Kränzle gives the Duke a very human personality, taking pride in his domain and evoking love and lust as well as a sense of humor as he embraces and even dances with Judith.

The drama increases in intensity as the doors are opened one by one, projections and lighting changing appropriately to emphasize the color associated with each of the successive rooms. The mood is generally dark as elements of blood and tears lace the castle and its interior. The exception is the Fifth Room, which reveals the extent of the Duke’s empire. After the Sixth Room’s lake of tears, the mute women return to the center of the stage and shed their outer garments, taking on a rather ghostly appearance, as the Duke consigns Judith to the Seventh Room, as the love of his nights, to join his three former wives who are the loves of his dawns, noons and evenings.