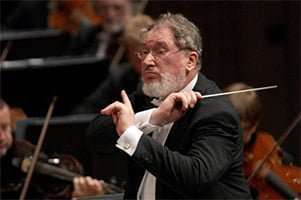 A lively H. K. Gruber stepped onto to the podium to get this London Schools Symphony Orchestra “Viennese Originals” concert off to an energised start with the Overture to Johann Strauss II’s best-known operetta. If not a batty choice, although no pushover for an orchestra of musicians of such tender years, Gruber made no concessions to his charges, champagne-fizzing from the off if with shapely and swaying waltz-time later on. If there were a few tuning and ensemble lapses, these soon cleared for a performance of poise and spirit, and oboist Lizzy Humphries made a pleasurable contribution.

As for Gruber’s own Frankenstein!! (1977), this has been heard in London several times and been recorded by the composer for Chandos. Its familiarity is also its undoing. Surreal the poems may be, but however deft and witty the orchestral writing (large forces with some novelties) and however charming Gruber’s Viennese-accented English, more a raconteur than a singer, a surfeit of Rolled Rs, rhyming couplets, decadent 1920s’ dances (a compendium of styles to feed the pan-demonium, the hyphen sometimes not needed) and unfunny inanity palled rather early, about 10 minutes into the 30, a too samey work for all that John Wayne, Batman and Robin, and Goldfinger and Bond were guests at this crazy party. One admired Gruber’s chutzpah and memory – he had no score, for being conductor, chansonnier and executor of numerous toy instruments allowed him no opportunity to consult one – but it was left to Gruber’s personal warmth and the enthusiasm of the LSSO to make something of this dated-sounding creation in which Gruber’s amplified voice wasn’t overwhelming but still managed to cover some aspects of the orchestration. His Dancing in the Dark would have been welcome, though.

The concert’s second half opened with Stravinsky’s brilliant Circus Polka (as orchestrated in 1944), which long ago transcended its George Balanchine choreography for elephants and ballerinas. It’s a rhythmically tricky number to play. The members of the LSSO did well, although Gruber rather pressed ahead in a straitlaced way, missing the music’s gawky motions that reflect the young elephant. A Viennese original? Hardly, but the work does close with a wicked and brazen quotation (which Stravinsky denied) from Schubert’s first Marche militaire (D733). Then Gruber belted through the Radetzky March in a somewhat different scoring to normal (or at least compared to what the Vienna Philharmonic plays), the woodwinds favoured. Thankfully we weren’t encouraged to clap along. As for With Giant Boots (1991) by Gruber’s friend and contemporary Kurt Schwertsik (born 1935), here was much noise and little substance, a gnarled, rebarbative and clangourous march that suggested Shostakovich in film-music mode, played with gutsy emphatic strides on the way to the abyss before seven side drums (which puts Boléro in its place) added further to the decibels. Still, it only lasted four minutes.

For the second of The Firebird suites, the compass pointed to Paris. This was a skilled and detailed account, Gruber calling for and getting responses of genuine hush (sometimes to near-nothingness) and virtuoso agility; the ‘Infernal Dance’ cued a terrific reaction. Solo work – from oboe (Lizzy Humphries again), horn (Jacob Rowe), bassoon (Todd Gibson-Cornish), cello (Laurens Price-Nowak) and the two swirling harps of Juliana Myslov and Jay Boender – were notable, and if Gruber may have slightly tweaked some passages, no final emphatic chord, for example, there was much for the LSSO and Gruber (as imaginative interpreter and a lucid inspiring conductor) to take credit from.

For the encore, it was back to Vienna for what I believe was Vergnügungszug, Johann Strauss II’s Opus 281, a ‘pleasure train’ Polka, or with Gruber as driver and donning appropriate headgear (a peaked cap), an express. We reached a red light signal when “Happy Birthday” suddenly struck up to mark Gruber’s recent 70th-birthday (on 3 January) and a cake with a steam-engine atop was wheeled on – now that was surreal – before the excursion continued on its journey. H. K. (Heinz Karl) ‘Nali’ Gruber – a member of the Vienna Boys Choir and an orchestral double bassist in his younger days, and whose distant relative Franz Xaver Gruber penned the music for the carol Silent Night nearly two-hundred years ago – here made many friends and certainly enthused the well-prepared LSSO.

Hopefully the London Schools Symphony Orchestra will not be affected by current funding cutbacks or be diminished in forthcoming years by the effects of the controversial and much-criticised English Baccalaureate. Was Michael Gove or anyone representing the Department for Education at this concert?