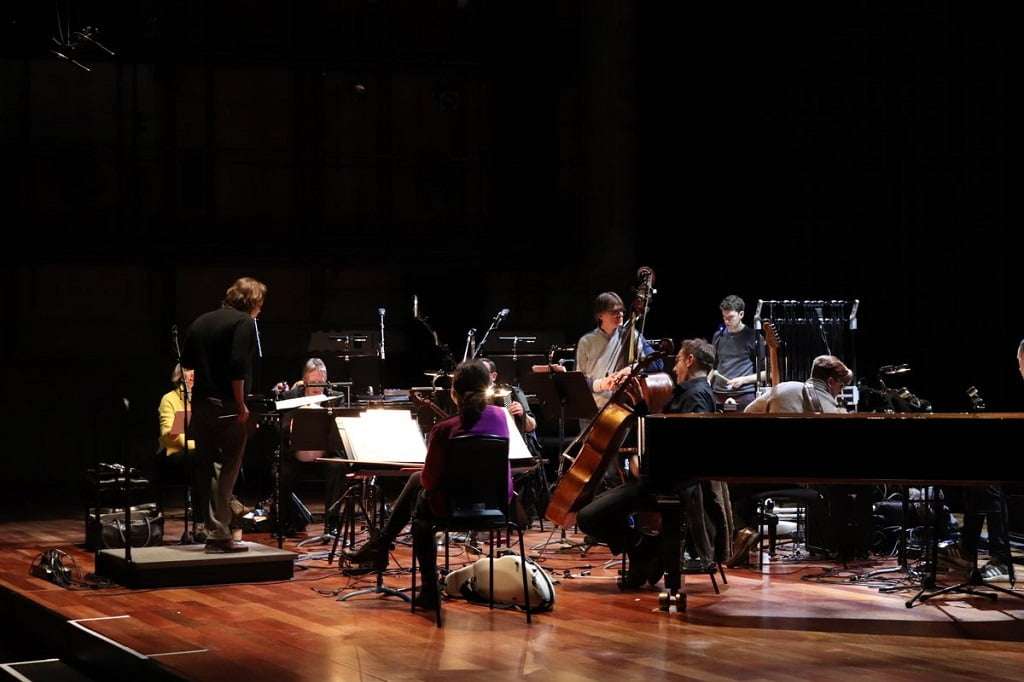 Southbank Centre’s Soundstate series continued with a concert from the London Sinfonietta as amounted to a conspectus of its programming past and present. Good to see that James Dillon, absent over many years from LS schedules following the disastrous premiere of Überschreiten in 1986, is now working again with this ensemble. Certainly there could be no-doubting its commitment in this realisation of Tanz/haus, fourth in the series of triptychs that – along with String Quartets – have dominated Dillon’s output this past decade.

Dillon has often stated his intention of writing music inimical to conventional analysis, and so it proved – Tanz/haus unfolding its three-part sequence of events as inscrutable in formal follow-through as it is tangible in expressive intent.

An inscription from Heinrich von Kleist – translated as “After all, the limbs are pendular, echoing automatically the movement of the centre” – might well serve as an aide memoire for the music’s progress which, typically for Dillon, evolves as long-term tension and release towards a (deliberately?) concealed goal.

Put another way – the arrival seems of less significance than the process of getting there, and such a process is alive with memorable detail; not least that stemming from electric keyboard, as enhanced by the deftest use of electronics, and the equally fastidious role of electric guitar. Voices can be overheard at the start then at various junctures over the near fifty-five-minute whole and their remaining out of focus adds just one more layer of meaningful obfuscation to what is heard, which Dillon has seldom equalled for its technical finesse or aural imagination. The Sinfonietta gave the composer’s intentions with absolute assurance and no little conviction, guided with evident precision by Jonathan Berman, a conductor demonstrably in the lineage of David Atherton and Oliver Knussen in terms not just of realising the score but interpreting it such that its essence was made readily perceptible to those listening. Hopefully he and the LS will give further hearings of this and of Dillon’s earlier triptychs, which are clearly among the highpoints of recent ‘new’ music.

If in many ways an upbeat to what followed, the first half was itself full of interest. Of the LS commissions, Josephine Stephenson’s Shuffle (2019) honoured its title as “the act of moving things around from one position to another”, over a series of cycles intuitive in unfolding and more atmospheric than evocative. Achieving less perhaps by attempting more, Oliver Leith’s Balloon (2019) emerge as an exercise in controlled frustration redolent of Gerald Barry at his most coy – one whose ultimate paralysis might be felt as much cultural as social or political.

Framing these pieces were classics. Birtwistle’s Pulse Sampler (1981/2018) was given in this new version with the oboe partnered not just by claves but a range of percussion which, at the hands of David Hockings, ensured interplay with Melinda Maxwell’s oboe both strategic and alluring. The evening opened with Coursing (1979), what could have been Knussen’s response to Elliott Carter’s Concerto for Orchestra but instead emerged as this six minute précis of a potentially larger unfolding – and no less vital or involving because of it. The concert was recorded.