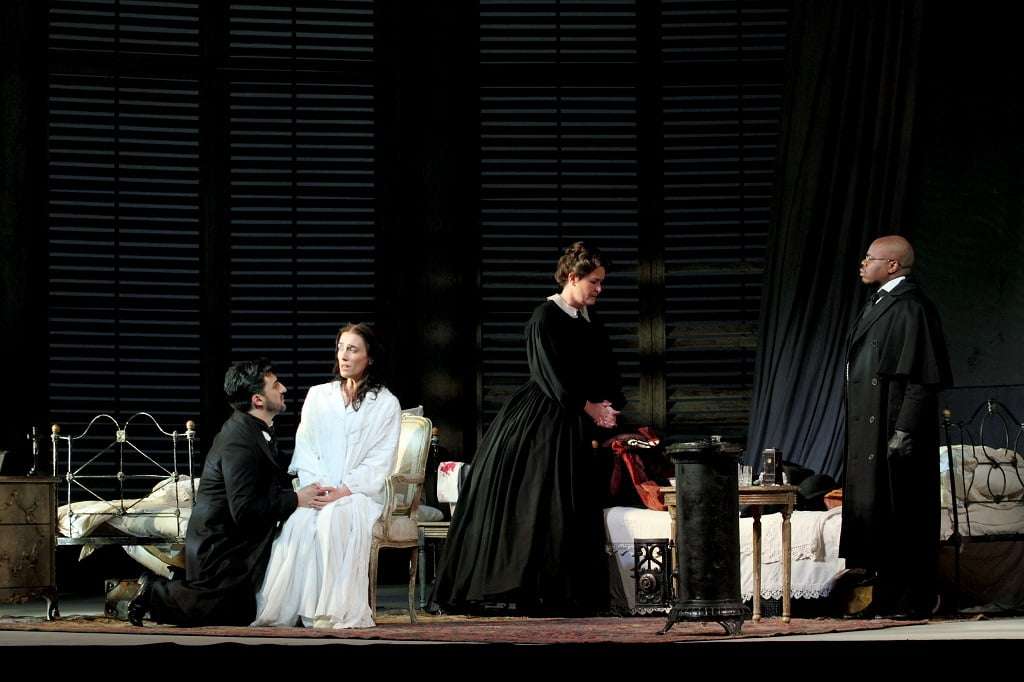 La traviata returns for its sixteenth revival since Richard Eyre’s production opened twenty-five years ago, and there is an impressive trio of leads and, making his Royal Opera debut, a fine conductor. Ermonela Jaho is well-known both as Violetta and to this staging – she first sang the role in the 2008 revival, when she replaced Anna Netrebko for four performances, and she has returned twice more since then. Jaho’s voice is not huge, and there are moments when her impeccable thread of sound becomes subliminal, which suits Violetta’s death scene very affectingly. Her acting is much more natural that I recall it from the 2010 revival, and there are many subtleties, charming eye- and hand-gestures, and a cleverly observed understatement that make her portrayal very persuasive. Her coloratura’s lightness and accuracy fly by, and, having got used to the scale of her voice, ‘Sempre libera’ is technically very impressive, with magnificent breath control and scrupulous articulation. She is intensely moving in Violetta’s Act Two exchanges with Alfredo and Giorgio, and the substantial quietness of ‘Dite alla giovine’ is a masterpiece of authority and sadness. Her slight build makes Act Three even more plausible, and she fades and rallies convincingly, with moments of full-volume despair seeming to be running almost on empty. “Non posso” (I can’t), as she accepts that she is beyond getting dressed, clinched Act Three, much more so than the staging’s ‘lap of honour’, which some Violettas pass on.

Charles Castronovo looks personable and is attractively restrained as Alfredo, and he comes into his own in the Act Two opening aria, sung with slow-burn ardour. His tenor isn’t a Verdi blockbuster, but Castronovo’s style is seductive, and his voice, while emotionally unvaried, is very beautiful. In his house debut, Igor Golovatenko is a forthright Giorgio, skilfully cutting to the chase in his confrontation with Violetta in Act Two, and by not overplaying the father’s self-serving rectitude, makes Giorgio’s sympathy in Act Three all the more credible. ‘Di Provenza’ is stylish and seamless, from a broad and grounded voice. There is a sumptuous Flora from Aigul Akhmetshina, a fine Dr Grenvil from Simon Shibambu, and a brilliantly played trio of worldly men-about-town from Jeremy White, Germán E. Alcantara and Thomas Atkins.

Antonello Manacorda delivers a detail-rich and responsive account of the score, which is beautifully played. The Eyre staging and Bob Crowley’s designs combine grandeur, glamour and intimacy to telling effect, and Andrew Sinclair’s revival direction is unobtrusive, with lots of things to notice, especially in Act Two.