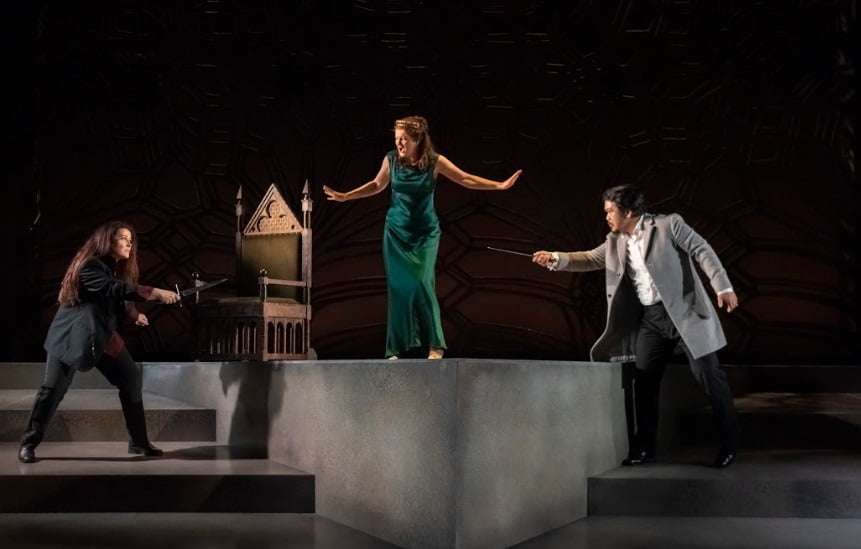 The first of Donizetti’s so-called Tudor operas was Anna Bolena, and it put him on the map. Performances in the UK, however, have been few and far between over the past four decades or so, despite the revival of bel canto’s fortunes in the 1950s. Donizetti fans of a certain age are likely to have grown up with the 1957 Callas recording, which, apart from many other merits, reminds us that this is singers’ opera writ large. The last time Bolena was at Covent Garden was in the 1980s, with Joan Sutherland near the end of her career as the doomed queen even nearer the end of hers, and more recently (that is, in this present century) English Touring and Welsh National have mounted it, it has been done at the Tower of London (where Anne Boleyn was beheaded, accused of adultery, when Henry VIII moved on to Jane Seymour), and the Royal Northern College of Music has also performed it.

Given the fascination for the Tudor period generated by Hilary Mantel’s novels, it is a shame that Anna Bolena is on the edge of repertoire, and Longborough has done it proud. As with its Wagner productions, Longborough’s theatre is best with statement-sets and detailed direction, both of which make their mark in the clarity of Jenny Miller’s staging and Nate Gibson’s designs. The starkly-lit design is very direct, with a terraced floor geared to courtly deference and regal authority, a pierced screen based on elaborate English renaissance fan-vaulting that provides plenty of spying opportunities, and an ornate Gothic throne.

Gibson’s costumes are contemporary-formal, but seem timeless. There are some oddities with lockets and hand-held mirrors, and the use of masks for the Chorus to establish faceless forces at work in destroying Henry’s Queen is perhaps overplayed, but in general the thirteen-strong group is directed in a spacious and integrated way, a glittering, ever-wary elite minding their own backs. The Act One hunting scene inevitably draws parallels with the Queen’s dire situation, which is anticipated in a deft bit of direction during the Overture signalling Giovanna (Jane) Seymour’s imminent ascendancy. 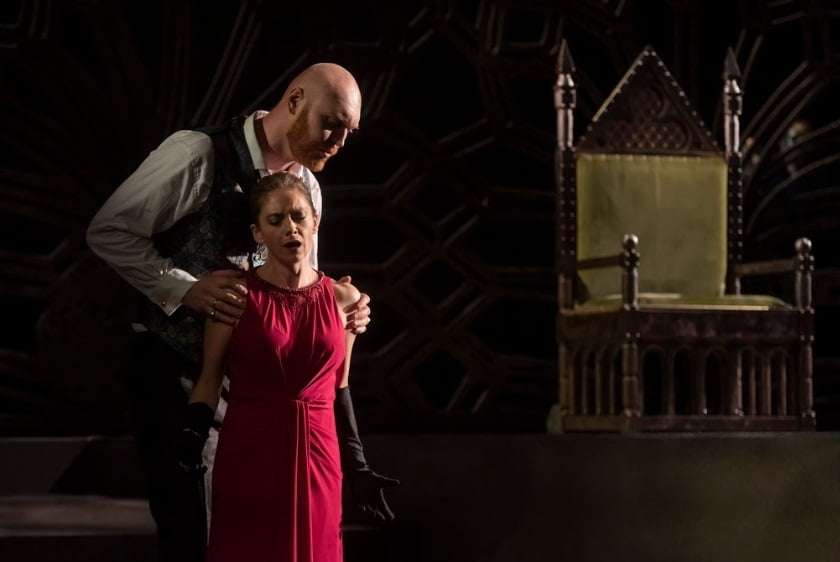 As Anna, Linda Richardson (who sang the role for WNO in 2013) moves convincingly between aristocratic hauteur and savage meltdown; her singing is even more strongly drawn, and coloratura fireworks are secure and intensely dramatic. In an opera noted for its ensembles, Anna’s great Act Two duet with Giovanna, during which the rival’s affair with Enrico (Henry) is revealed, is a high-wire act of guilt and fury, with Caryl Hughes’s Giovanna pouring petrol on flames of betrayal very satisfyingly. Occasionally Hughes’s volume dipped but in terms of drive the two women square up to each other well, while Anna’s ‘mad scene’ before her execution, with much variety of tone and emotional colour, presses the tragedy button hard.

As Enrico, Lukas Jakobski dominates every scene he is in, as much for a superbly lethal and feral presence (compounded by being very tall) as for vocal caress, threat, insinuation and authority. Just as thrilling is Jung Soo Yun’s Percy, Anna’s former betrothed, who plays a significant part in her downfall. His tenor cuts between raw power, heroic elegance and full-on ardour, sometimes possibly a bit too big for Donizetti, but it’s marvellous and confident. Carolyn Dobbin performs the travesti role of Smeaton, the page besotted with his Queen who is also folded into her betrayal, with unaffected beauty of tone and personality. The Queen’s brother Lord Rochefort (also executed) is stirringly played by Matthew Buswell; and Alex Haigh puts in a well-sung, oily performance as Hervey, the King’s courtier.

Jeremy Silver guides the Orchestra through the Italianate timbres of Donizetti’s scoring, doesn’t force the levels of instrumental interest, and keeps the tension wattage high with a particularly powerful Finale to Act One.