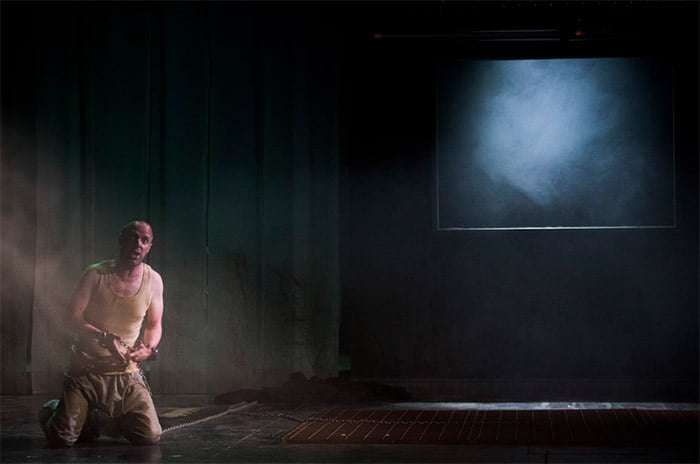 Beethoven’s awkward opera-singspiel-melodrama Fidelio has suffered more than its fair share of indignities, and Orpha Phelan’s new production is no exception in its collision with faith, imprisonment and corruption. In an attempt to heighten the story’s realism, Phelan’s big idea is that Pizarro is the head of a dodgy drugs company which also keeps prisoners sedated. In the dumb-show during the Overture, we see that her Florestan is an Eco-warrior hero who has uncovered the truth, in the process consigning Pizarro permanently to a wheelchair, which is why the latter is royally hacked off – and Florestan languishes in “B-wing”, spoken of in tones of dread.

So far, so oppressive, but Phelan’s eagerness to explain the, er, rift between Florestan and Pizarro has inspired Madeleine Boyd to go overboard on her designs, which in Act One are a Heath Robinson riff on an Alien-style sci-fi look, with lots of tubes pumping chemicals into the prisoners, a huge machine with dials and twinkling lights on it, and a ton of other stuff. Clutter is an understatement, relieved in Act Two by an empty stage so dark for Florestan’s opening ‘Gott! Welch Dunkel hier!’ that you literally can’t see the singer, with a return to more manic stage realism when the poor man goes into cardiac arrest, no detail spared. 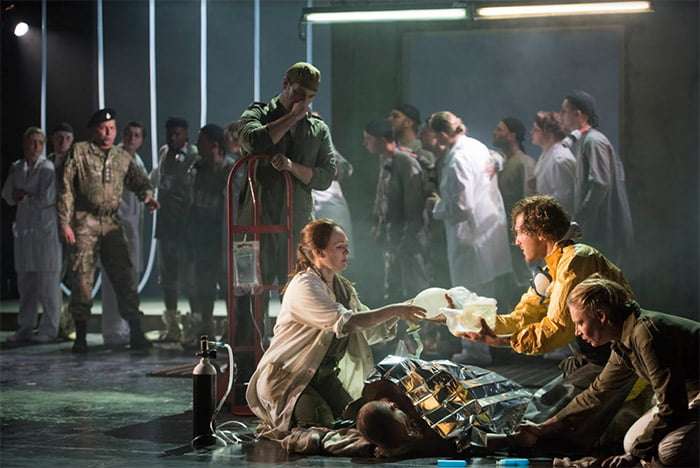 The competition between production and music goes up a notch with the set-pieces sung in German and the text spoken in a demotic English, which I suppose all the cool Longborough dudes and dudesses are entirely familiar with. Phelan also has a hand in bringing the surtitles in line with her modish update, but not, I think, the original German.

It’s a miracle that the music makes any headway. Sometimes, it’s a bit of a wrench, with some ensemble wobbles, but the ‘Mir ist so wunderbar’ quartet has the desired stillness, and Act Two’s first scene builds up the tension. The Israeli-French conductor Gad Kadosh keeps the music on track through most of the distractions, and the alert, wiry orchestral sound gives its many sublime moments room to bloom. 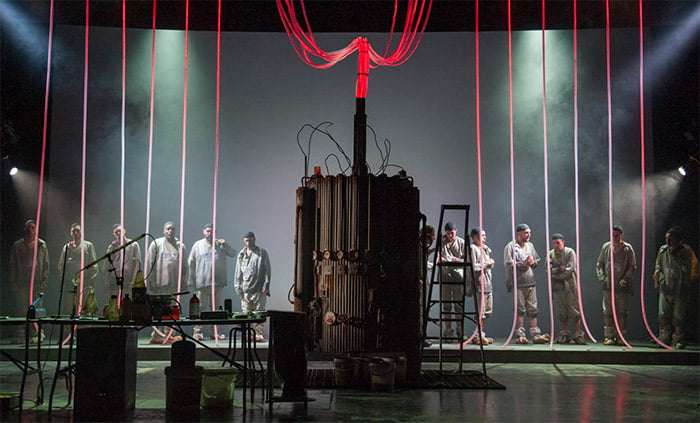 Elizabeth Atherton engages with Leonore’s (Fidelio’s) nervous concentration superbly, and that went some way to make up for the moments when you wished her voice had a fuller gleam to it. Adrian Dwyer comes off well in the punishing demands of Florestan’s soliloquy. On this first-night he and Atherton were cautious in the impossible angularity of ‘O namenlose Freude’. For a moment I thought that, for Rocco, John Paul Huckle’s American accent was put on to give the spoken words more cred – he is American – and his solid singing gave the dungeon scene a deadly sense of purpose. Simon Thorpe went for Pizarro’s villainy with a will, and if ‘Ha! Welch’ ein Augenblick’ is undiluted melodrama, when isn’t it? – and it fits his considerable dark voice well. Lucy Hall and Sam Furness both sing with charm as Marzelline and Jaquino respectively, although the dynamic of their relationship gets buried.

After the denouement, Jaquino hangs around smoking what looks like a huge joint, blowing smoke-rings; perhaps he’s looking forward to finally getting it on with the hitherto Fidelio-fixated Marzelline. With most of the cast dressed throughout in protective overalls, you could suspend disbelief about Fidelio/Leonore’s ambiguous gender, but just to make sure that we know he was a she all along, Phelan has the last word during the concluding hymn of praise with Leonore elaborately reassigned to her womanliness in a chic little black number.