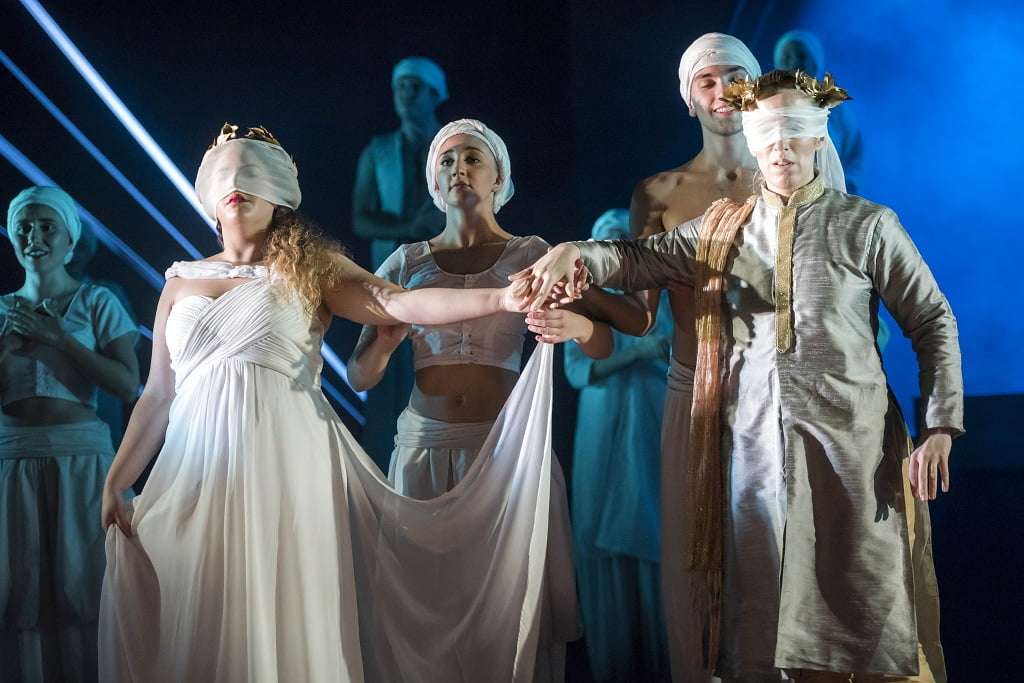 It’s a good idea to produce Gluck’s Orfeo ed Euridice as part of the Longborough Festival’s Young Artist’s programme, with its exploration of innocent and relatively youthful love cut down in its prime but then restored to life. There may only be three principal characters, but the opera provides the opportunity for singers and dancers to add to the unique atmosphere of Classical simplicity and ritual in which Gluck’s adaptation of the Greek myth is framed. Their efforts are not expended in wilful, volatile action, but in solemn, stately choreography that runs parallel with the inspiration of Gluck’s score and makes a complete unity of words, music and drama.

No doubt that synthesis is achieved more effectively by virtue of the chorus also constituting the dance troupe, with only the three more specific parts, of a pair of Blessed Spirits and Charon, taken by full-time dancers. There is therefore a seamless, symmetrical spectrum attained between music and dance, as between the solo singers and the dancers at either end, with the chorus mediating between the two, and underlined by the climactic dance routine of the Blessed Spirits which reprises the work’s trajectory from death, lamentation, trial, apparent failure, to renewal during the ballet music before the concluding chorus. 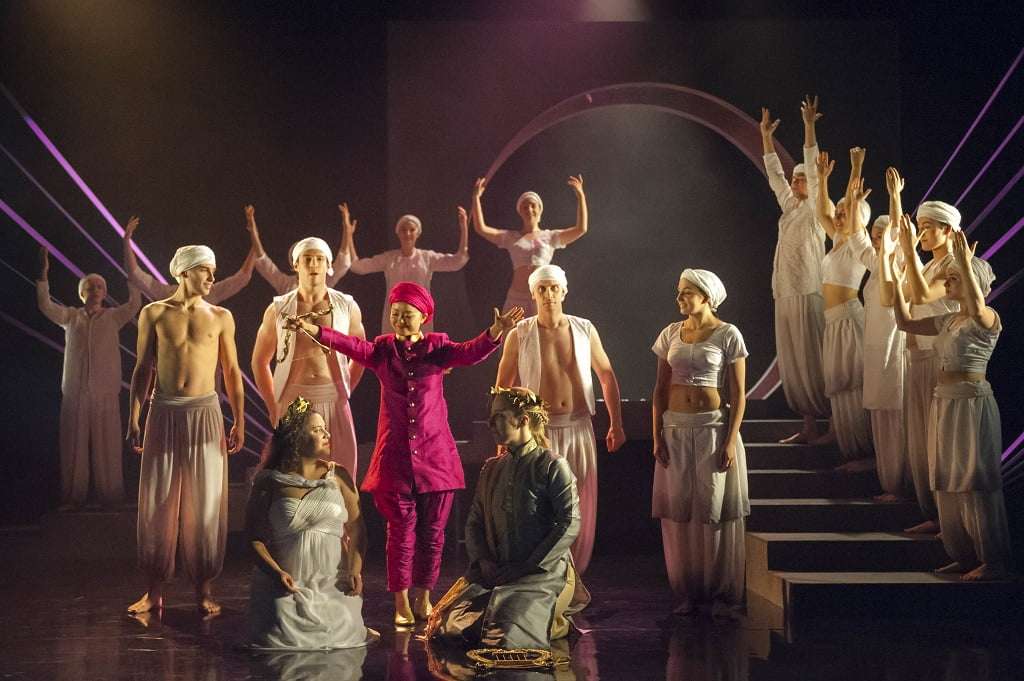 The timeless set in Richard Studer’s suggestive design, with its near-circular opening raised upon a pair of perpendicularly aligned staircases, provides a point of focus whilst avoiding being tied down to any specific or limiting meaning. As the place of a funereal urn in the opening scene of lamentation for Euridice, and as the framing point for the coming together of her and Orfeo at the end, it could quite clearly stand alternatively as a barrier beyond which it is not possible to go, or a place of aspiration and a goal to reach, as a well as a more ambiguous liminal point through which one might or might not advance, especially as it is a boundary breached on only a few occasions during the drama.

Evocative lighting further adds to the rarefied atmosphere which is not cluttered by props or changes of set. The one other consistent visual motif is the use of long bands or cords, presumably inspired by the strings of Orfeo’s lyre. Again, this offers symbolic versatility, implying restriction when aligned in a triple column on one side of the circular opening and later stripped off, or when thrown out by the Furies towards Orfeo to bind him as their prey, or denoting a bond of security and freedom in relation to Euridice when lines of the same material radiate tellingly outwards from the circular threshold to indicate potential, direction and guided movement. 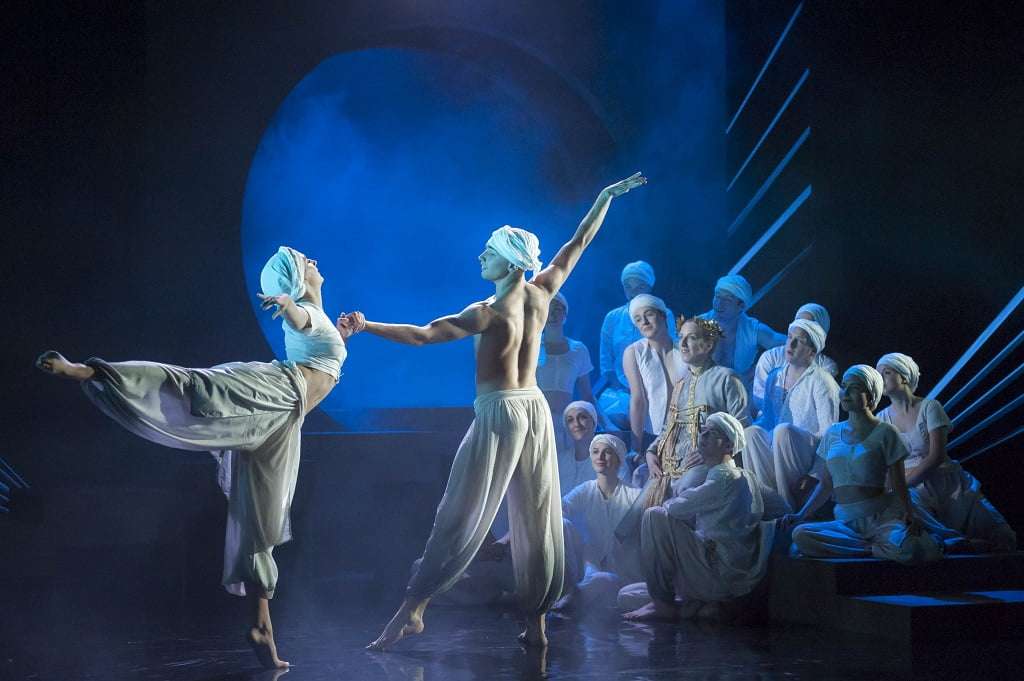 Against such a backdrop, and a well-blended chorus, the three vocal soloists emerge as musically distinctive, independent figures, providing a contrasting personal dimension against the impersonal within the ritualised, mythical form of this drama, although, arguably, a slightly too defined sense of individuality runs counter to the temper of restraint and anonymity elsewhere. Hanna-Liisa Kirchin brings human nobility and ardour as Orfeo in lamenting the death of Euridice, which does not relent either as he undergoes the trial of leading her out of Hades whilst attempting to avoid the temptation of turning around to her, or in his final triumph. Nazan Fikret sings with surprising force initially as the shade of Euridice in the Underworld, though she certainly adds necessary brightness to the performance in which no sunlight or day is glimpsed, despite being referred to. In the part of Amore, depicted as the boy Cupid in a vivid red that could equally be the blood of a love that kills, as that of a reviving, life-giving force, He Wu sings with appropriate charm if also with some vocal wobble.

After some rough moments at the outset, the orchestra settled down and evolved its own consistent, solemn momentum and sustained the drama with it. Jeremy Silver finds the right pace for this music allowing Gluck’s directness of expression to sound pregnant and portentous, rather than deracinated or deficient. With the timbres of the harp or the harpsichord accompaniment coming through clearly there is a compelling presence from the pit to complement that on the stage, making this a creditable example of what opera can achieve as the dramatic realisation of myth or narrative through image and poetry, underscored by music, which can appeal over the head of literal reason and thought to the faculties of imagination and emotion.