Mozart
Die Zauberflöte, K620 – Singspiel in two Acts to a libretto by Emanuel Schikaneder [sung in German, with English surtitles, and with dialogue in English] 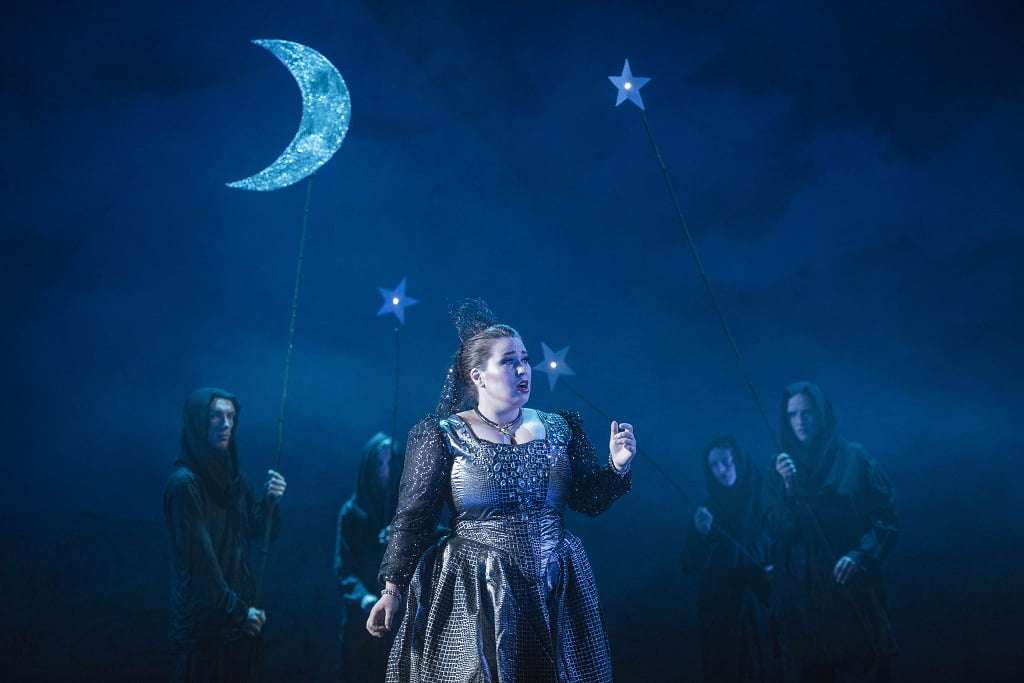 Mozart’s final operatic masterpiece, The Magic Flute, is of a rather different, more philosophical, temper than the great Da Ponte comedies which form a more obvious staple of summer opera fare. It is perhaps with that in mind that Thomas Guthrie’s new production for Longborough seeks to diffuse its solemn and hieratic character by treating it as more a charming fairy-tale in a lightly ironic vein that need not to be taken too seriously. A certain emotional and dramatic distance from the opera’s message is set up during the Overture where a boy reading a story in bed, at the end of which the drama springs into life as an enactment of that. Such a concept need not have been problematic, and could have carried some insight into the work. But it turns out to be somewhat muddled both as an idea and in execution.

Firstly, this conceit lost sight of the fact that as a fairy-tale – or as fantasy or myth, however one wants to take the opera – such a form can and should be a non-literal means to a deeper engagement with the pervasive and abiding issues of Life and Death rather than brushing them aside. The spoken dialogue is cut to a bare minimum (some editing is perhaps no bad thing) but that obscures the dramatic action and the characters’ motivations at times, as well as hampering any wider exploration of the opera’s themes. The dialogue for Papageno, in particular, is also adapted to make some topical references, but it tends to be banal and fails to complement Mozart and Schikaneder’s achievement, turning it into something like an inconsequential piece of stand-up comedy. 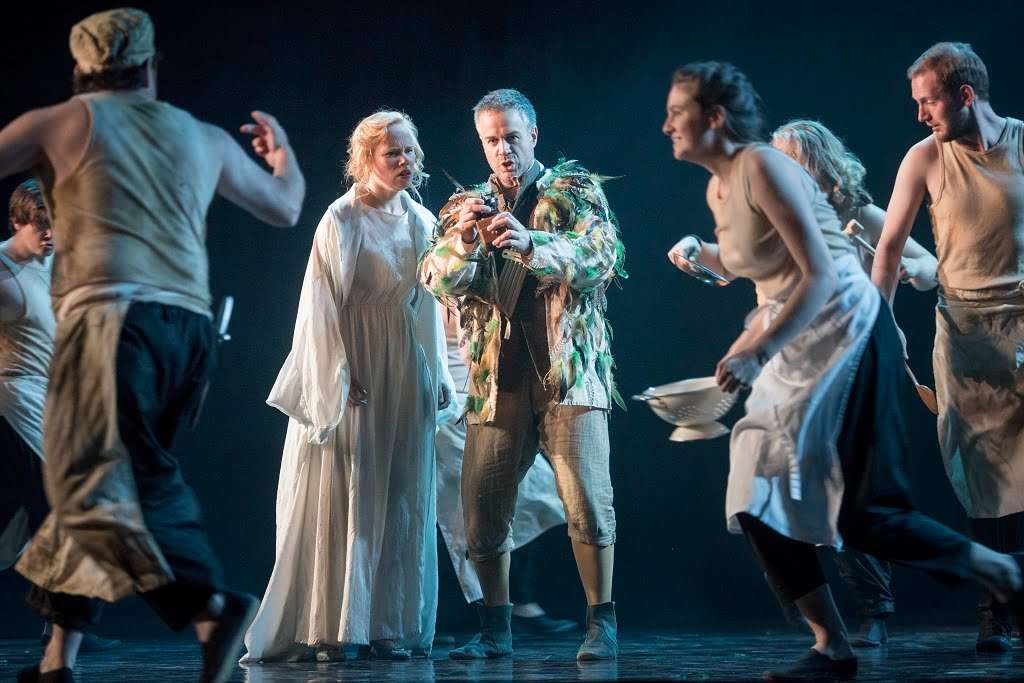 Secondly, in execution the production could make clearer its notion of the work as an imagined enactment: periodically an ‘extra’ appeared with a board to indicate the chapter number of the supposed story and a description of the forthcoming scene, but done with little dramatic aplomb and the text was not always visible – it would surely have been possible to have projected this on the same screens as the surtitles. It is also not clear why the parts of Tamino and Pamina were taken by featureless dummies (and only the top halves of the body at that) during the very beginning (Tamino’s rescue by the Three Ladies, and the first appearance of Pamina through her portrait), and during the trials by fire and water. If it is an insight into enlightenment, or the unveiling and development of personhood, it is followed through inconsistently – even despite the translucent curtain at the back of the stage which periodically opens to reveal other characters or an eighteenth-century garden vista. Such incongruity is paralleled by the lighting which, however evocative and beautifully nuanced, remains rather dark throughout doing little to suggest the contrast between, and transition from, darkness to light. The climax is not even met with a blaze of noontide sunshine and metaphorical illumination, but with the indirect, burnished glow of sunset. The result is an oddly joyless interpretation where a more magical blend of fun and profundity could have been achieved.

In the pit Anthony Negus conducts a fast-paced and vigorous account of the score that gripped and nudged the attention towards this vision of the drama as a lively fairy-tale. The counter side of that, in tending to be hard-driven, is that it also effaces the contrasts in the music which mirror those of the drama, as between good and evil, light and dark, solemnity and levity. Hence there could have been greater atmosphere in the music associated with Sarastro’s realm (such as the march which opens Act Two and Sarastro’s ‘O Isis und Osiris’), more ecstasy in Tamino’s ‘Dies Bildnis is bezaubernd schön’, and greater contrast between the two halves of the Queen of the Night’s first aria. Certainly the textures of Mozart’s music often came through effectively, bearing a properly symphonic stamp but there was an overall effect of restlessness, rather than a willingness to explore the contours and complexities of the invention. 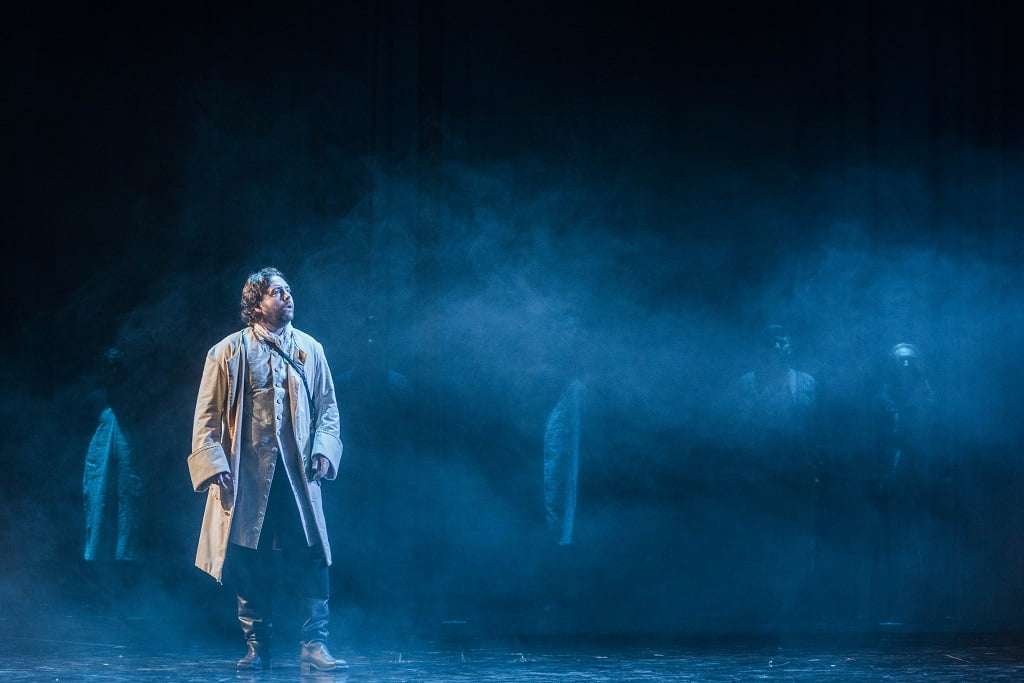 Despite that, the cast is strong and makes a vivid musical impression. From the outset both Julian Hubbard and Grant Doyle sing with vociferous enthusiasm, Hubbard making Tamino a properly heroic figure, if perhaps even a little too powerful for the intimate Longborough house, and Doyle provides welcome humour as Papageno. Their counterparts, Beate Mordal (Pamina) and Sarah Gilford (Papagena) were rather coyer, if still vocally engaged and fresh-sounding. The moving ‘Ach, ich fühl’s’ for Pamina is another case in point where, had the pace eased up, the result would have been more cogent and expressive.

Intriguingly, Hannah Dahlenburg’s Queen of the Night sounds alluring and almost innocent initially, in seeking to persuade Tamino of the justice of her cause in rescuing Pamina, but is then rightly vengeful and furious in ‘Der Hölle Rache’, in both cases singing with fiery accuracy. Musically she projected a compellingly varied and nearly sympathetic Queen, though she commanded less fear and awe in her acting. Similarly Jihoon Kim offered a serene and authoritative musical presence – though with more head-voice and a lyrical tone, rather than from the chest – but not so much of a charismatic or defined demeanor, and his unidiomatic declamation of English in the dialogue was tricky to follow. 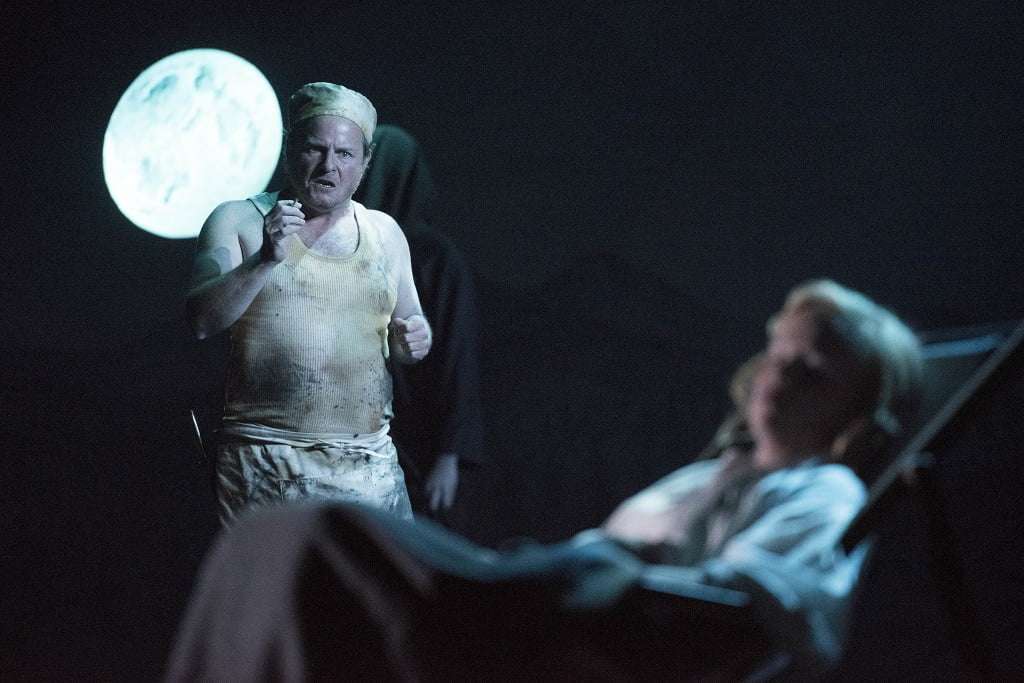 Colin Judson (replacing Harry Nicoll) sings with a reedy warble as a comically villainous Monostatos, characterising him in a vocal manner reminiscent of a more caricatured approach which some Wagnerian singers are accustomed to take with respect to Mime, though it is more apt in the context of The Magic Flute. The other groups of anonymous characters here are cohesive, providing further impetus, not least in Benjamin Bevan’s Speaker of the Temple; the more solid tone of the adult female singers in the roles of the boys, transformed here into androgynous guardian spirits; and the two vocal lines of the priestly duet ‘Bewahret euch vor Welbertücken’ are bolstered through the addition of a third Priest and Bevan.

So, a mixed bag in which the musical dimension is more appealing than the production. There certainly are elements of mystery and visual spectacle within this uncluttered staging, but whether they enable people to reflect upon the wider themes of the opera is another matter.