Lorin Maazel “used to live right opposite the prince’s palace in Monte Carlo, and I’d hear the fanfares played every day at the changing of the guard at 12 o’clock, Finally I couldn’t deal with it any longer…”. Those daily fanfares (surely more palatable than the detestable piped-music that too many shops and banks unwisely impose on its potential customers – they usually lose my business!) form the basis of Monaco Fanfares (1993), a short, witty piece for a large array of winds (including a pair of saxophones) and percussion. 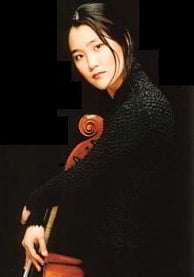 Music for Violoncello and Orchestra (1993-94) was written for Mstislav Rostropovich. Again, Maazel’s scoring is extravagant and includes accordion and harpsichord (the latter requiring four hands at one point). Maybe because of Rostropovich’s involvement, one might hear a Russian flavour in the music, particularly the fingerprints of Schnittke. The first instrument heard is a violin, a long lyrical solo (beautifully played by Zsolt-Tihamér Visontay) before the cellist dialogues and then a solo viola enters the discussion. Come the orchestra’s appearance the mood is chilly and tense, the shift from Gulag to Harlem (trumpet solo) convincingly inter-cut. There is an obsessive, Shostakovich-like quality to later sections, macabre and ghoulish. Over its 27 minutes, Music for Violoncello and Orchestra proves engaging and thought-provoking. Han-Na Chang (from memory) gave a remarkably sounded and virtuoso account of the solo part, and so too the did the Philharmonia Orchestra.

Maazel’s conducting prowess undimmed (one has to take a second glance to realise that he turns 80 next March), rest assured that Shostakovich 5 was all that he wanted it to be. Taking the Moderato marking literally and throwing it across the whole of the first movement (here taking 20 minutes, about five minutes longer than the ‘average’), it emerged as unusually cohesive in terms of motivic relationships, appropriately gawky in the march section and with an inevitable trajectory towards the climax. As is well-known, Shostakovich was out to appease the authorities, the Fifth Symphony being a “response to just criticism”. Of course, the music is full of ambiguities, enough to deceive those that the composer wished to.

What we got from Maazel was a ‘real’ symphony, one without the baggage of circumstance, rising above its genesis – or too dispassionate and non-committal to what the work is ‘about’. If the first movement lacked something in tension and undercurrents – if nothing in assurance – the succeeding scherzo had both bite and propulsion, the trio shorn of irony for something prettily musical-box. The slow movement emerged as a genuine Largo (the composer’s marking), eloquent and intense, the Philharmonia’s strings in radiant form, Kenneth Smith’s flute a laser-light of expression.

Maazel launched the finale attacca grinding it into life and leaving room for the marked accelerando. All was fine until the coda! Forced and robotic it should surely be. While one can’t expect (or indeed would want) conductors to share Kurt Masur’s vision (which is uncompromisingly massive and hammered out), Maazel’s sudden forward-jerk of speed made the end decidedly happy-go-lucky (in effect if not in execution); all too easy, glib – but, maybe, this is a perfectly reasonable “response”, too. We will all make something different of it. Forget the narrative; this was formidable music-making!