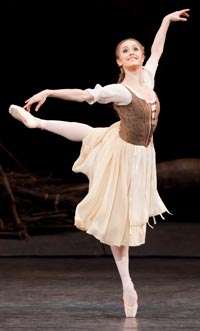 There are first nights and there are first nights, and this first performance this season of Giselle was an event indeed, for it was the debut of Marianela Nuñez in the title role. Nuñez is perhaps the most beloved of all the Covent Garden principals, not only for her formidable technique, which allows her to do pretty much anything, but also for her infectious delight in dancing and sunny stage personality. Hitherto, she has been cast as Myrtha, the Queen of the Wilis on account of her jump and technical strength, but she made it no secret that she yearned to dance Giselle, and this season her wish has come true. How she would fare as the sweet peasant girl with the weak heart, betrayed by a noble cad yet faithful to him even beyond the grave was the unknown element – she has been strongest in abstract, pure dance works and comedy, and indeed her Lise (in La Fille mal gardée) and Swanhilda (in Coppélia) have been superb.

In Act I her Giselle is the first cousin of these sunny, perky girls, and there were many delightful touches and a refreshing spontaneity to her interplay with Acosta. This was a cheerful, open Giselle, enamoured of dancing and unwilling to allow anything to cloud the clear skies of her positive mood.

And yet here is the great weakness in her interpretation: yes, her betrayal which sends her into madness at the end of the act is a huge shock to her, but Giselle is a pure product of the Romantic movement (the ballet was first performed in 1841), and she must have that shadow which falls across even her happiest moments. Not only should she have a foreboding about her love for Albrecht but she knows deep down that her mother is right in warning her not to dance, for it will kill her (as it does). Nuñez does not see it that way, and it is wrong. It makes her Giselle an earthly human creature when the greatest interpreters of the role have had a touch of the spiritual about them from the outset. She is also such a strong, healthy dancer that, both as a person and as a spirit, she fails to convince fully as the embodiment of the Romantic ideal. Needless to say, there is nothing in technical terms that Nuñez is incapable of mastering, and one can admire her mastery already of nearly all aspects of the role, but with Giselle, that is merely the beginning, and indeed, some of the greatest Giselles have not been the strongest technicians. 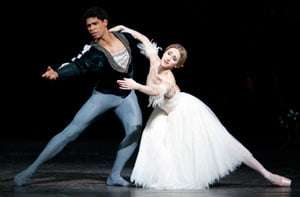 Carlos Acosta partnered Nuñez with sensitivity and care, taking care to show off his ballerina. His own interpretation of Albrecht is well known – he plays the casual cad well, although his acting is a strange mix of the naturalistic and the balletically precious – his cape management in Act II was reminiscent of Nureyev and every preening Soviet Albrecht of the past. He too is technically strong and made the most of each opportunity to dance, although there was more than a hint of the party piece at each occasion.

Helen Crawford was an icy and implacable Myrtha, in command of her fiendish choreography at the opening of Act II (after a forgivable wobble in the first arabesque penchée) and brutal in her rejections of all entreaties for mercy. The corps de ballet was mighty impressive – I think there has been a subtle rethink of the interpretation of the Wilis, and their movements have acquired a greater sharpness. Ensemble was excellent, as was cohesion of style.

Act I saw the Peasant pas de six (usually a pas de deux, but here amplified by Peter Wright), which is very much a showpiece. It has been unevenly cast in the past, but here all was well, not least with Laura Morera and Ricardo Cervera as the lead couple. These two dancers are among the most stylish in the company and Cervera’s solo was characterised by musicality, precise technique (his petite batterie was fast and accurate) and clear enjoyment in his dancing. Morera’s solo is by Ashton (although unattributed in this revival) and whereas it can appear disjointed and unstylish in lesser performances, she made it flow and breathe. It requires all the Ashtonian attributes of musicality, épaulement, fleetness of foot and invisible preparation, and Morera delivered on all fronts.

A special mention to Gary Avis’s Hilarion – a clear and reasoned performance by this exceptional character actor, here in that magical period of his career when he is able still to dance as well.

The production looks good (it was premièred in 1985) although small details change at each revival. Last time the change was to clear the stage at the end of Act I apart from the dead Giselle in the arms of her mother; this time, Myrtha’s wand which breaks at the moment of Giselle’s protection of Albrecht at her grave has now gone. Small changes but they add little. For this production the company went over to Joseph Horovitz’s revision of Adam’s score, and it was not necessarily a positive step; here under Boris Gruzin there seemed too much percussion in the pit; Giselle is not late 19th-century rum-ti-tum, and requires a lighter hand than it receives from him at the helm of the Royal Ballet Sinfonia.