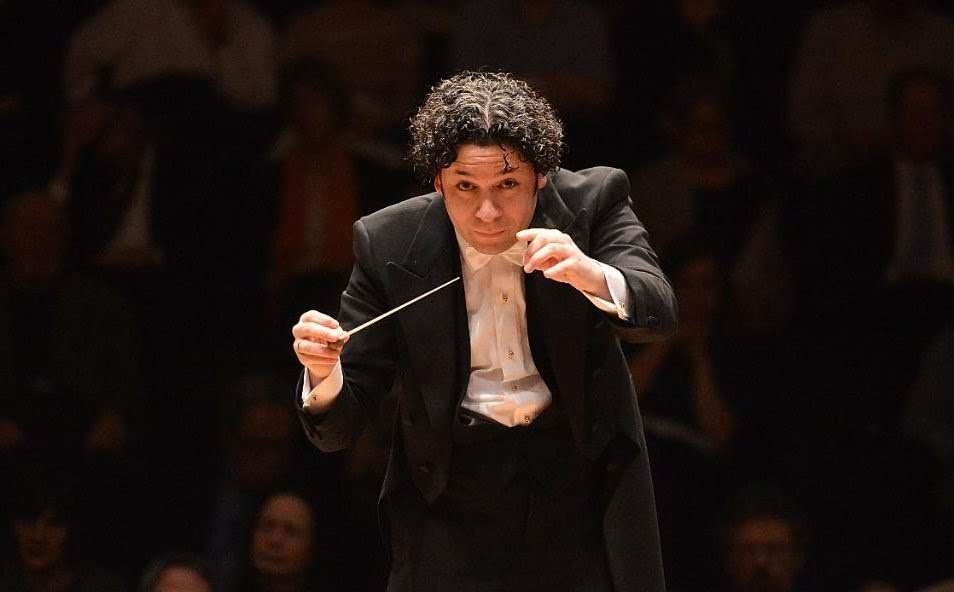 The visual and colouristic aspects are so intrinsic to much of Olivier Messiaen’s music (including Des canyons aux étoiles, completed in 1974) that it is surprising there is not a collaboration between performance and graphic display more often or even at all (in nearly twenty years of listening to this composer’s music I have not been aware of such a project in the concert hall). Seeing that Messiaen’s twelve-movement work is divided into three parts (each centring on one of the canyons of south-western America) and the Los Angeles Philharmonic’s residency at the Barbican this month features “American Soundscapes”, it made perfect sense to mount a visual backdrop.

The landscape photographer Deborah O’Grady was commissioned to produce a sequence of pictures of the specified canyons to complement the music, and to a large extent they did that. Generally long-held shots caught the awe-inspiring character of these landscapes in-between images of smaller-scale settings within those vast vistas, showing trees, thickets, geological features, or occasional animals (though notably few birds). Like Messiaen’s essentially theological and astronomical vision, O’Grady’s arrangement is largely devoid of human beings.

Her display picked up on the latent apocalyptic and eschatological dimensions of Messiaen’s score (with his allusions to the words written by the disembodied hand at Belshazzar’s Feast, and the movement entitled ‘The Resurrected and the Song of the Star Aldebaran’) by making some reference to the destructive impact of humankind upon the environment through pollution and the depletion of its resources. Her series misses the opportunity, though, in following Messiaen’s journey from the physical landscape of the canyons in this world to the transcendental realm of the stars above, and so her photographic accompaniment remained resolutely earthbound and non-mystical, with only a few lunar and stellar scenes.

Gustavo Dudamel’s conducting similarly singled particular features of the scenery, evoking the majesty of the landscapes. In many ways Messiaen’s 90-minute score is chamber music writ large, and here the contribution of the individual performers with some unorthodox methods of playing their instruments was vivid and ear-catching – for example the range of harmonics produced by the strings and by bowed crotales. At other times Dudamel achieved a fine integration of textures to recreate in sound the magnificent scenery. The woodwind section was notable in this regard in ‘What is written in the stars’. The repeated chorale-like motif in ‘The Wood Thrush’ was cheerful, as also the instrumental dialogues of several other movements. If there was not always an ethereal, transcendent quality to this account, there was certainly an aura of spaciousness and grandeur. Sometimes, too, the rhythms could have been more flexible, as Messiaen’s melodies do not always need to be strictly measured.

Joanne Pearce Martin on the piano was very sensitive to the warm and colourful timbres which Messiaen draws – especially in two long sections where birdsong is the fore. Compared to the more virtuosic, percussive reading given by Tzimon Barto under Christoph Eschenbach at the Royal Festival Hall in November 2013, her account brought more nuanced shading and delicacy to the varied textures. On the horn Andrew Bain was somewhat too forceful, often sounding like the heroic protagonist of a Richard Strauss score rather than bringing the otherworldly to bear upon the narrative, especially in his solo ‘Interstellar Call’, however technically proficient he was (though that should not be underestimated). James Bobar and Raynor Carroll (also standing prominently at the front of the stage) did sterling work in gilding the orchestral tissue with their etchings on tuned percussion.

Overall then this was a successful and stimulating marriage of sight and sound.