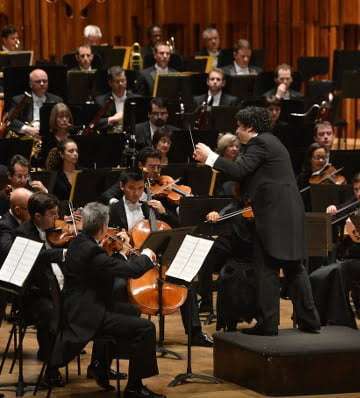 Anyone who criticises the Barbican Hall acoustic did not hear the warm, resonant glow that hung, satisfyingly if spectrally, in the air after the final chord of this Mahler Three with Gustavo Dudamel and the Los Angeles Philharmonic. As with Messiaen’s Des canyons aux étoiles the previous evening, Dudamel was stock-still with arms still raised at the end. But, whereas there he was able to hold the silence for what seemed like a minute, here – after an involuntary sotto voce exhalation of “wonderful” – there was a “bravo’ bellowed from the back row of the Stalls, even before the reverberations had completely died away.

For those who had had a transcendental experience, their mood would have been cut short, at least until the barrage of applause and a standing ovation obliterated the bravo-shouter’s faux pas. I was annoyed that a very good performance of a great work had been needlessly tarnished by someone who was obviously not thinking about what the music is saying. If you were, you would want an extended period of contemplative silence. The aural glow, notable elsewhere during the performance, may well have been partly to do with the LA Phil playing on the flat rather than on risers.

As it happens, whilst hugely enjoying the performance, I was left unmoved – no spine-tingling sensations at all through its 100-plus minutes, even though there were teeming details to admire. For a conductor who seems to becoming ever-more self-effacing (even more so than a previous incumbent at this orchestra, Carlo Maria Giulini) – who the previous two nights had largely been behind a piano – we at last got to see Dudamel leading the LA Phil from the front. Conducting without a score, he has a graceful, fluid style most-of-all characterised by a calm centre which left him as fresh and unflustered at the end as he had been at the beginning. There seems to be no superfluous gesture, and there is no doubt that he has learned a thing or two from Claudio Abbado.

Take the upbeat to figure 24 in the sprawling first movement, where the violins are marked immer nur de Hälfte – Dudamel opts for just the back desks of the first and second violins. Given he favours antiphonal violins (cellos and double basses with the firsts), this was immediately and visually striking. The nine basses also made their mark, while concertmaster Martin Chalifour led an impressive list of solos, notably Jörgen van Rijn filling the vacant principal trombone position with the first movement’s mournfully trenchant repeated theme (as he had done for Abbado with the Lucerne Festival Orchestra at the Proms 2007), and Thomas Hooton’s marvellously atmospheric off-stage posthorn solos in the third movement. At first I couldn’t fathom where his music was coming from, sounding utterly ethereal (it was off-stage left); oddly enough, from the other side off-stage, the side drum that heralds the recapitulation of the first movement sounded terribly dry and otherworldly for all the wrong reasons. Principal oboist Ariana Ghez mined a distinctive husky rusticity at the opening of the second movement, but was so much more suave in the Nietzsche setting of the fourth movement, genteel in the upward slurs where Simon Rattle, for one, urges a more keening tone.

Tamara Mumford returned with the LA Phil (following being Martha in John Adams’s The Gospel According to the Other Mary at the Barbican just over three years ago) with a pleasing, lighter timbre than is sometimes heard in this setting. Her stage entry between the second and third movements thankfully elicited no clapping. The rather cramped Tiffin Boys’ Choir ‘bimmed’ and ‘bammed’ lustily, backed by the ladies of the London Symphony Chorus in the fifth movement and stayed standing a while as Dudamel went into the swelling grandeur of the Finale.

Yet somehow the end (even before the audience interruption) left me respectful but not enraptured. Individual moments didn’t coalesce into a cohesive and overwhelming whole to produce that ineffable tingling of the spine that you never want to stop. I have no doubt such architectural rigour will develop in Dudamel’s interpretation and, coupled with the myriad of fascinating insights he gave me into the score on this occasion, such future performances will definitely be worth catching.