Beethoven
Symphony No.1 in C, Op.21
Péter Eötvös
Snatches of a Conversation
Scriabin
Symphony No.2 in C-minor, Op.29

This concert by the London Philharmonic saw the start of 2020 Vision: Three Centuries Collide, in which Beethoven’s nine symphonies are juxtaposed with works composed one or two centuries hence. It is easy to forget that the modest formal dimensions of the First Symphony yield any number of tonal and expressive quirks which lack audacity only when compared to the chamber and piano pieces preceding it. Vladimir Jurowski presided over a lithe and agile reading – a little too headlong in the opening Allegro, with the fugal interplay of the Andante deftly pointed if lacking ingratiating wit, but the third movement evincing a buoyancy as made its ‘Menuetto’ heading more than usually inappropriate, then the finale having the right combination of energy and high-jinx prior to an ending of irresistible elan. 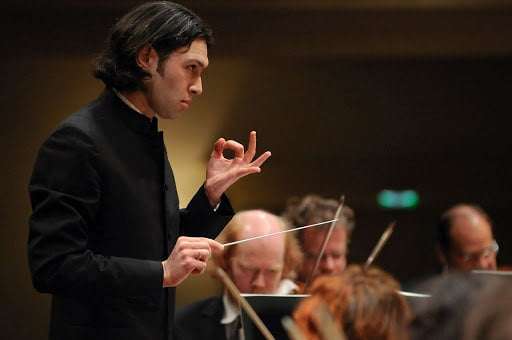 Something completely different next with a welcome revival for Snatches of a Conversation, Péter Eötvös’s amalgam of chamber music and melodrama. Here the reciter becomes a ‘noise-maker’ – in this instance the inimitable Omar Ebrahim, who relayed his associative tract of exchanges half-heard (or, more likely, half-imagined) with a whisper of needle-sharp precision (Woody Allen reciting Samuel Beckett?), against which Marco Blaauw projected the ‘hard bop’ trumpet part with insinuating elegance. As Evan Dickerson’s programme note reminded, Eötvös has here produced an intriguing piece which cannot easily be categorised. Whether it found an ideal context in the present concert is less certain, and yet the pertinence of so doing can hardly be denied. Certainly, the audience’s response was suitably intrigued.

There could scarcely have been a greater contrast in the second half, with its comparatively rare performance of Scriabin’s Second Symphony. Although in five movements, the first and fourth are essentially introductions to their successors, leaving a stand-alone slow movement at the centre (a trajectory shared with Charles Ives’s Second Symphony, completed at much the same time). Jurowski brought out the sombre rumination of the initial Andante, its clarinet theme (audibly related to that beginning Tchaikovsky’s Fifth) underlying later thematic material as if a ‘motto’, then galvanised the ensuing Allegro so its unwieldy sonata design yielded real vitality and purpose; here as elsewhere, addition of cymbals (suspended or clashed), as taken over from Nikolai Golovanov, helped to articulate those emotional high-points accordingly.

The Andante, its somnolent (and here unexpectedly Delian) pleasures shot through with an anxiety which surfaces in the brooding central climax, was purposefully shaped such that it never risked torpor – making it the highlight of this piece (and arguably of Scriabin’s three numbered symphonies). Less scherzo than febrile intermezzo, the Tempestoso was instilled with a coursing energy amply carried over into the final Maestoso. Scriabin may later have regretted its tendency to overkill, but Jurowski’s tensile momentum avoided mere bombast.

Soloistically and collectively, the LPO responded with the conviction necessary in music that needs to be made to sound more than the sum of its parts – the outcome being a late-Romantic epic as could even now become as a crowd-pleaser. On this basis, it deserves the opportunity.