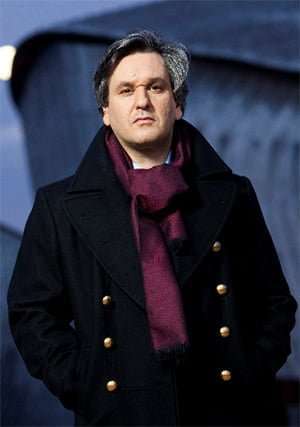 This mouth-watering programme of two very different masterpieces featured an orchestra and conductor that have forged a potent musical force in recent years, something maintained here following a recent trio of concerts in Italy, and then one in the Barbican Hall three evenings ago (linked to below). Add in a concurrent run for Antonio Pappano conducting Verdi’s epic Don Carlo at Royal Opera House.

This year is Witold Lutosławski’s centenary (and he died in 1994). His Concerto for Orchestra (completed in 1954) is popular in every sense, accessible, folksy and kaleidoscopic – if setting traps for the unwary given the enormous stylistic leaps-forward in Lutosławski’s music during the 1960s and 1970s, culminating with the masterly Third Symphony written for Solti and Chicago. Antonio Pappano led a performance of Concerto for Orchestra that opened emphatically, the ‘Intrada’ given with weight and deliberation, and gutsy attack, easing into a beguiling tapestry of colour and expression. The gloves were off. This may be an orchestral showpiece, the conductor was saying, but it also has depth and dramatic power. In the ‘Capriccio notturno e Arioso’ that follows its surreptitious scurrying was given the deftest of touches, colours finely etched, and always indicative of something below the surface, which burgeoned in the ‘Arioso’. The finale, ‘Passacaglia, Toccata e Corale’, is the work’s longest and most diverse movement, precisely gauged here for its contrasts and also paraded with welcome cohesiveness. Very particular timbres made meaningful contributions, and the whole was bounded into a scintillating conclusion, the LSO in rapacious form. Such virtuosity served only the music and brought a symphonic success.

As for Tchaikovsky’s Fourth, antiphonal violins now even more pertinent, Pappano once again combined portrayal and unification unerringly. The LSO’s brass section made the opening ‘fate’ motif brazen, Pappano then searching what follows for soul and significance, and finding it, the structure seamless and obliging that the different sections, from balletic lightness to emotional outpouring, be appreciated as inevitable. It’s easy to be slick and superficial with this music, handsomely avoided here, and all the more thrilling for it. The slow movement, its opening oboe solo elegantly turned by Fabien Thouand, was soft-hued yet rapturous and played with finesse, briefly dancing, woodwinds decorous, before a turn to melancholy. The pizzicatos of the scherzo were playful, and with subtle dynamic variance, the woodwinds and brasses bucolic in the trio. Then the finale crashed in, festive yet pensive, after all that ‘fate’ signal is waiting in the wings to return, which it did, emphatically. But the gloom lifted and the coda was exhilarating; we even heard the triangle’s ping on the resounding ultimate bar to complete an engrossing and rewarding traversal of this great symphony.

Although we don’t know officially that Valery Gergiev will stand down as Principal Conductor at the end of 2015, when his current contract ends and he is Munich Philharmonic-bound, we do fully expect a vacancy. If Antonio Pappano is not on the LSO’s shortlist to succeed him, then he bloody well should be!