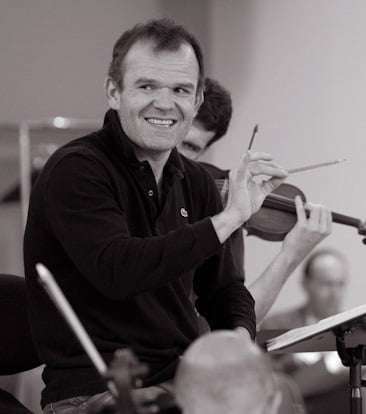 Stepping in for a indisposed colleague, I was sadly unable to attend the early-evening St Luke’s concert of music by Darren Bloom (premiere), Thomas Adès and Schoenberg, nor the following Guildhall School’s account of Berio’s Folk Songs, but the LSO’s evening concert was a winner, two modern classics and something brand-new: stimulating programming. Having conducted at St Luke’s, François-Xavier Roth was also on hand for the Barbican Hall, all part of LSO Futures, its five days of various events, including workshops, now coming to an end.

György Ligeti’s Atmosphères (1961) deploys a large orchestra (without percussion) for delicate and vaporous sounds, often sustained and rarely fortissimo. No wonder it appealed to Stanley Kubrick for use in 2001: A Space Odyssey, albeit with the composer’s disapproval. Roth, magician-like, conjured a spellbinding account of convincing timbre and balance, and perfectly graded fades, not least the final one leading to a long tension-filled silence and eerie stillness.

Next up in this without-interval concert, 26-year-old Elizabeth Ogonek’s Sleep & Unremembrance, inspired by Wisława Szymborska’s While Sleeping, one of numerous poems written by the terminally ill Pole in her final years. Ogonek’s ten-minute score is colourful and vivid, capricious too, punchy and luminous, capable of seduction and shadows, contrasted with rebarbative gestures. Her handling of a large orchestra (including piano and harp) is confident and individual, consistently tantalising the ear, and there is a confiding solo for viola, played here with eloquence. The final measures suggest loss and farewell and the piece ends in mid-air (mid-sentence), if potently. I hope to hear more of Elizabeth Ogonek’s music.

Luciano Berio’s Sinfonia (1968), first-performed by the composer and the New York Philharmonic with the Swingle Singers – the programme-note for this LSO concert was mistaken in crediting Leonard Bernstein, he conducted the movement-added revision in 1970. Sinfonia turns up quite often despite its demands for eight vocalists and its overall complexity.

A few balance problems aside – the members of Synergy Vocals (in a range of speech and effects) sometimes too loud or, conversely, overwhelmed, and rarely heard from these performers’ positions, a semi-circle surrounding the conductor, but rather from the off-platform banks of loudspeakers – this was a fastidious account that kept the music fresh, not least aspects of 1960s’ anarchy, and Berio’s extensive orchestral palette (including saxophones) was, as always, a joy.

The big central section, effectively the Scherzo from Mahler’s ‘Resurrection’ Symphony, overlaid with speech and interpolating additional quotations – including from Beethoven’s ‘Pastoral’ Symphony, Debussy (La mer), Ravel (La valse), Strauss’s Rosenkavalier and Stravinsky’s Rite – was as mesmerising as ever, and its dissolve into the fourth movement suggested this latter as Berio’s counterpart to Mahler’s ‘Urlicht’. A few issues aside, this was a superb performance, the last part’s increase in activity judged ideally, to the edge.