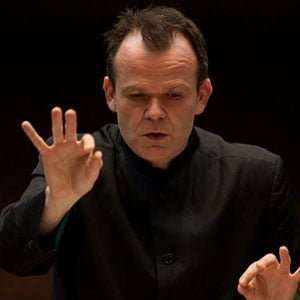 The LSO pulled out all the stops for this enterprising and rewarding pair of concerts that concluded the week-long Futures events. The only real challenges were for the players – heroic and dedicated throughout – and the music, however complex, was mostly a joy with François-Xavier Roth the perfect conductor for the job, well-prepared and inspirational, a friend to every piece, and who clearly has a close rapport with the LSO musicians. 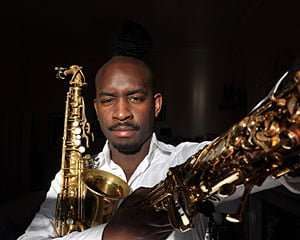 We started in 1931 with Edgard Varèse’s Ionisation, for a plethora of percussionists managing skin, metal, sirens and piano. At once sophisticated in its notation and primitive-sounding, Ionisation was here given a rhythmically agile outing, well-balanced and together. Jason Yarde (a Future) was up next, as performer and composer, for the first performance of his Modo Hit Blow, which outlines the piece’s three (uninterrupted) sections. Scored for the composer’s own saxophone and piano, with brass and percussion, it was the latter group that had the opening to itself – in clamorous and motivating terms. When textures thinned, Yarde and pianist Andrew McCormack entered, attractively jazzy and busy. This is skilled and likeable music; yet, perhaps due to the instrument’s backwards position, the piano barely registered, save in solos, and gave the impression (I suspect falsely) that Yarde had miscalculated.

Stravinsky’s original version of Symphonies of Wind Instruments (woodwinds and brass) is from 1920 and was composed in memory of Claude Debussy, who had died two years previously. Roth sculpted an incisive account, maybe a little rushed, but the work’s sense of ritual was sustained, contrasts made vivid, and the closing ‘resting place’ was sympathetically sounded. However, I venture to suggest that Stravinsky’s 1947 revision was in fact given. The first concert ended with John Adams’s Chamber Symphony, scored for an ensemble of strings, woodwinds and brass, with a percussionist (Neil Percy) on drum kit and hand-played tom-tom and smaller drums, and a synthesiser (John Alley) to add a variety of timbres. Even at 23 minutes, Chamber Symphony (1992, there is now a ‘Son of’ successor), despite its ingenuity and exhilaration, can seem too long, for all three movements become relentless. Yet the whirligig first movement (‘Mongrel Airs) swings and scintillates, then ‘Aria with Walking Bass’ lives up to its billing, layer upon layer (but oh for some repose), and then the rip-roaring, rowdy and roving ‘Roadrunner’ offers a speedy conclusion, with a few traffic violations along the way. If one wished the movements to be each a little shorter, one could only send a “Bravo!” to the indefatigable performance that the LSO members gave us.

Inevitably, with programmes such as these, those who are not curious about new and/or seminal work or who ‘know what they like’ reduced the audience tally at the box office. That said, the second concert – sporting the LSO at its largest – brought a well-attended Stalls area. As before, there was no interval, which worked well, and Roth continued to be an enthusiastic and engaging host. (A shame though that this concert clashed with the National Youth Orchestra’s in the Royal Festival Hall.)

Anton Webern’s official first publication (there are numerous pieces prior to it that he suppressed but which we have access to today, Im Sommerwind for example) made a fine start to the evening. If Passacaglia is no real indicator of the Webern that developed over his next thirty opuses, this romantic and expansive piece shouldn’t nonplus anyone who might find Webern’s later works somewhat daunting, however aphoristic and economical many of them are. Roth led an impassioned account, sensitive and searing. After this the genius that is Pierre Boulez’s extravagant re-working of his 1945 piano set, Notations. Hopefully he will complete all twelve, for these re-imaginings are exquisitely turned in terms of colour and inflexion, and also have a healthy outreach. Huge though the orchestral apparatus may be, everything is realised with typical lucidity. The LSO has played the orchestrated Notations that have so-far appeared with Boulez himself conducting, and this familiarity was evident throughout these wonderful pieces, whether iridescent, sumptuous, alluring, shimmering and, a word used by the composer, strident. 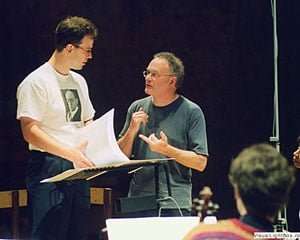 After music by an established master, we heard contributions from nine further Futures composers, linked by writing a Variation on a section of Sir Andrzej Panufnik’s Universal Prayer. The opening is the late Polish/British composer’s work, here imposingly arranged by Colin Matthews, a very important figure regarding LSO Futures and the Panufnik Scheme. Matthews has also contributed two Variations, bookending those by his younger colleagues, which he has linked to form a satisfying 23-minute sequence. Now, being honest, your reviewer got a little lost early-on, mistaking what I now believe are ‘attached’ contributions by Max de Wardener and Evis Sammoutis as one; they were similar though! However, with a bit of recollection and re-jigging, I enjoyed them all, particularly the one I noted as “Arabian, English pastoral” (maybe the composer will come forward if that description holds good*), the bleakness of what I believe was Larry Goves’s contribution, and I know I was back on track for Raymond Yiu’s engagingly rhythmic input (with a quotation from Panufnik’s Sinfonia Sacra) and therefore can confidently name Anjula Semmens’s deeply beautiful response. The whole was finely attended-to by Roth and the LSO.

Finally, Debussy’s La mer, a staple of the LSO’s repertoire (the last thirty-five years have included performances under Celibidache, Haitink, Boulez, Colin Davis, Gergiev and Pappano, and the work featured in last year’s Donatella Flick Conducting Competition. If this one under Roth wasn’t the most pristine of renditions (given the amount of music being played, rehearsal time may well have been at a premium), it nevertheless exuded experience if being a little precipitate yet symphonically integrated; an alive and physical performance with which to end a stimulating coming-together. It is invidious to pick out only one principal player, but leader Roman Simovic was outstanding, and he had more than his fair share of violin solos to address, in Adams, Webern and Debussy.

As I finish this review, the sad news that Sir Colin Davis has passed away (on the evening of Sunday 14 April 2013) reaches us. He had been poorly but we hoped to see him conduct again. He was a great mentor to young musicians, so I’m sure that the Futures enterprise and these concerts given with unstinting focus by the orchestra of which he was Principal Conductor and then President would have delighted him. On a personal note, he was the first musician that I interviewed, back in 1992, and he could not have been more welcoming and friendlier to a nervous greenhorn. He leaves a wonderful legacy of humanity and musicianship.